Movie Review: You’re Next is a clever thriller 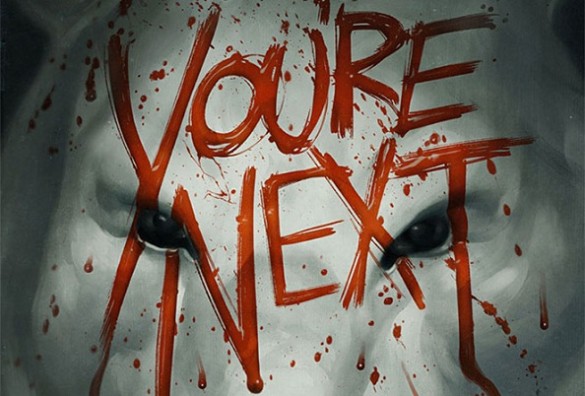 Synopsis: When the Davison family comes under attack during their wedding anniversary getaway, the gang of mysterious killers soon learns that one of victims harbors a secret talent for fighting back.

Adam Wingard and Simon Barrett have worked together before in the V/H/S series, and with Barrett writing the screenplay here as well as acting in a minor role, the two seem to have chemistry together. In this slasher movie, an insufferable and quite wealthy family arrives for a getaway at a remote location in a wooded area. They are attacked by masked murderers and everything seems quite predictable for for the first act of the movie. However, the film gets interesting by implementing some twists which certainly aren’t game-changing to the horror genre, but make the film quite enjoyable by the time the credits roll. The direction was very typical for a director who hasn’t had a ton of experience yet, but has certain ideas and brushstrokes which make him quite unique and intriguing.  One scene in particular involving a camera in the latter half of the movie was exceptionally astounding, and rivals my favorite scene of the year (the opening scene from The Place Beyond The Pines).  Such innovation behind the camera makes Wingard someone to keep our eye on in the future. The problem with the direction here is that scenes are sometimes 10-20 seconds too long and nothing is happening at all to progress the story.  This has nothing to do with the screenplay and everything to do with how Wingard oversaw the film’s completion in post-production. The first act was just so horribly bland that it’s hard to recommend this film to non-horror fans.

The ideas and twists in this movie are actually quite clever, and by the end it really is quite a smart movie that treats the viewer with respect. It’s just hard to tell that in the first 30 minutes or so. There isn’t a lot to critique with the script and I felt it seemed tight and creative. I think with more time and possibly a better editor, the movie could have been much better based on what Barrett came up with. This kind of movie reminds me of something I’ve read of Quentin Tarantino.  He has always known that he is creative in the writing and directing process, but he fully entrusts other talented people to edit his films (mostly the late Sally Menke of course). A strong screenplay with strong performances don’t always result in equally good finished products.

Much like the crew on this film, the actors are fresh faces to general audiences. This is sometimes a risky move, but it seems fairly common in horror nowadays.  Sharni Vinson (Home & Away, Step Up 3D) plays Erin, for all intents & purposes the lead actress, and does quite a job of giving us a unique performance that spans quite a lot of space. She is asked to do a lot in the film and I felt that she was extremely solid. The rest of the cast put in nice performances too, and I felt like all of them did a good job of being fairly realistic to what people of their status tend to behave like.  Aside from Vinson, though, I felt like no one else did any exceptional work.

I actually remember wondering why there were so many moments with dead air in the movie as I was watching it, and I really didn’t care for that too much. Sometimes a minimal score works for me, and sometimes it doesn’t. This film tend to rely on more sound effects-related sound to alert the viewer of moods or feelings the director wanted you to have. All in all, nothing too special.