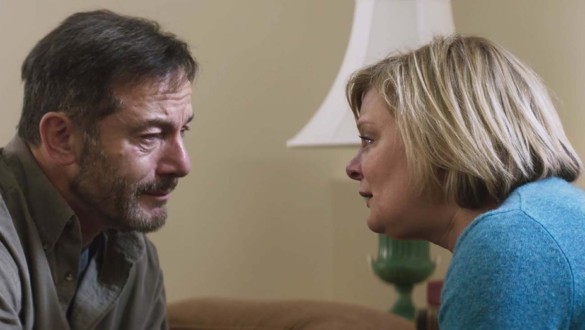 Synopsis: Aftermath of a violent tragedy that affects the lives of two couples in different ways.

The situation of the characters in writer-director Fran Kranz’s debut Mass is unimaginably horrible. Some years after a high school mass shooting, two sets of parents whose children died that day meet in a private room of a church in an attempt to heal from their incredible grief. What makes it unimaginable is that while one of the couples are parents of a murdered child, the others are parents of the shooter. It would be horrific to be in the same room as these four people, and yet that’s how we spend the vast majority of Mass, intruding on an intimate and painful conversation. Just thinking about it is utter hell.

How do you approach such a story? You’d need a screenplay filled with authentic emotions, a directorial talent for capturing intense intimacy and knowing not to suppress the conflict that comes naturally. It’s a lot to ask of a first-time writer and director, but it’s admirable what Kranz manages to capture. Being stuck in a room charged with such anger, sadness, and trauma for the majority of the 110-minute runtime seems emotionally exhausting, so when it becomes clear that Kranz is capable of portraying how these tortured parents would feel, our main question isn’t will it feel real, but will it work dramatically?

In terms of characters, this doesn’t seem like a problem. Jay (Jason Isaacs) and Gail (Martha Plimpton), whose son Evan was a victim of the shooting, clearly find coming to this meeting incredibly difficult, and their discomfort is shown through their frequent talking over one another. They’re newcomers to this organized healing process, and you can tell they resent how relatively at peace the parents of the perpetrator, Richard (Reed Birney) and Linda (Ann Dowd), seem. There are layers to their conflict, as each parent has an anxiety-inducing transgression of overstepping the politeness they’ve all constructed to avoid acknowledging the pain. We get a sense of the grief that has, for years, defined how they speak and behave.

Everyone has their own agendas, which peel back through a slowly building first act where we’re initially unsure who belongs to what side and it’s unclear what they want from each other. As the crescendo builds, the facades start to fall away, thanks to the pitch perfect performances from everyone involved. Dowd always has a captivating presence, and Linda is matched well with Birney’s stern but obviously pained Richard. Plimpton and Isaacs, however, are the most compelling – we see them struggling to keep their burning rage and sadness in check because they haven’t quite figured out how to express it without blaming Richard and Linda outright. The first act is anxious to the extreme as potential distractions and interruptions from the church around them threaten to make an appearance to heighten the two couples’ discomfort.

But they never do appear. Once the second act begins, once the characters start to address what’s going unsaid between them, the film relaxes into a rhythm of conversation that lacks the tension needed to stay gripping. Talking is a crucial part of storytelling, and whole dramas are built around the power of conversation. Talking can be revealing, compelling, dynamic, and there are sections in the rest of the film where Kranz’s dialogue is all three. But Mass has too much of explaining backstories, recounting memories, and sharing information for the audience’s benefit rather than the characters, meaning the drama of the scene starts to ebb away. It’s much less engaging when our characters know how to express their pain rather than when they felt powerless at being inarticulate.

A film like this isn’t a bad thing. It takes great skill to pull off a story as intimate as this, and for a debut, Mass is undoubtedly impressive. We’re stuck in an ordinary room that no-one wants to be in and where the most awful feelings will be felt. A commitment to the uncinematic is commendable, and there’s enough genuine moments of intimacy and showcasing of authentic human suffering to appease an audience. But while it doesn’t have to be cinematic, it does have to be dramatic. Kranz partially understands this, he’s detailed the conversations with subtle changes in power, shifting who’s accusing and who’s defensive. As we roll towards the climax, however, the characters start explaining their emotional breakthroughs, and the beats in the story feel more labored and tired than they should be.

On some level, this seems like an unfair criticism. This is a film about talking, how it’s always powered by our own defenses and resentments, and how we use it to express the inexpressible. But if Kranz is so aware of this, why after the first act does the talking feel less and less powerful? The intimacy the camera provides, how you can read the exactness of what someone’s feeling up close, means that Mass lends itself to the cinematic medium, but you can’t help but feel it would make on stage. The immediacy, feeling the anxiety Jay and Gail have at being trapped in that unthinkable room, would have been felt tenfold if we were trapped in a room with them. There’s nothing wrong with telling this story on film, but there are alternative ways to make it work better which are worth exploring.

Mass is an experiment in real-time healing and not a failed one. It asks us, how are we supposed to heal? Is there a right or a wrong way? These are people upon whom terrible trauma and irreparable grief has been thrusted, and if they find some form of peace, it’s possible to be satisfied by the narrative trajectory of the film. Mass was always going to be engaging because of the story it’s telling, and natural, quiet filmmaking that deals with intense emotions should be celebrated. But the emotions, how they’re portrayed by the confident direction and stellar performances, aren’t the problem, the structure of realizing them is. If the road to the emotional catharsis feels forced or stale, it’s not going to feel as purifying. And these characters deserve to be unburdened in the most powerful way imaginable.