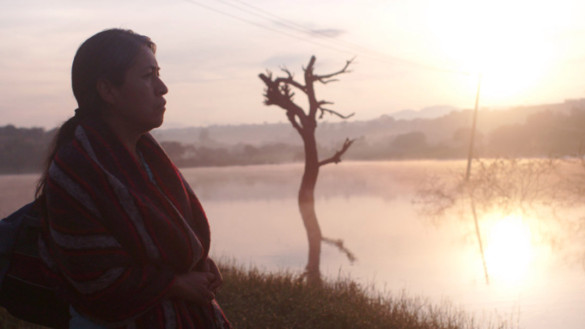 Synopsis : A mother travels across Mexico in search for her missing son despite authorities insistence that he died crossing the border

It’s hard to overstate the cruelty of the United States’ immigration process. Even after migrants travel thousands of miles through uninviting environments, there is still little chance that they make it to where they intended. With millions of families, this leads to an uncle, sibling, or child that they never see again. For Magdalena (Mercedes Hernández), the towering central figure of Fernanda Valadez’s debut film Identifying Features, this is more than just an anecdote. Two months after her son, Jesus, leaves for Arizona with his best friend, there’s no sign of either of them. Like many in the real world, they have simply  slipped through the cracks.

While this story might be familiar to anyone who has paid attention to the U.S.’s border crisis, Identifying Features illustrates the tragedy in evocative detail, especially for those that lack that particular painful experience. Without turning the film into an Alejandro González Iñárritu style tale about the inherent sadism of human nature, co-writers Astrid Rondero and Valadez carefully portray the harshness that comes with trying to track down a missing migrant and family member. For the film’s first half-hour, you follow Magdalena as she moves through bus stations, office buildings, and various other uncaring locations in an attempt to find out anything about her son. Various bystanders are apathetic to her struggle because it’s a story they hear too often to be invested. As she moves through these circumstances, the film begins to feel like a Kafkaesque world of ugly overhead lighting and office desks, a mechanical realm that doesn’t care one bit about the disappearance of an asylum seeker.

A little before the Identifying Features’ halfway point, Valadez shifts to a more human narrative to balance out the harshness of the beginning. While the film opens with looking at the systems that could lose an immigrant, eventually Magdalena stops jumping through these frustrating technological hoops and starts traveling across Mexico to find answers. Along the way, she meets Miguel (David Illescas), who recently returned from America. The duo’s bond is one of the strongest centerpieces that the film has, as their quiet companionship is appealing and captivating. This is where Hernández’s gripping performance takes hold of the film, with her silent furiousness only growing as the run length moves onward. Although Illescas does a solid job playing Miguel, it is nearly impossible to hold one’s own against Hernández’s incredible acting. This is mostly her story, after all.

Plaguing the backdrop of the film is the gang violence of Latin America, which constantly threatens to derail Magdalena’s journey. Especially once the storytelling moves past the mechanical, Magdalena’s search for her son feels like a dangerous ordeal, opposed to just being told vaguely that things are bad. The film finally decides to show us the inherent mood of danger, as opposed to simply preaching it. Because of this emotion, it’s a shame that the film somewhat sputters out and wastes this forward momentum. Valadez’s assured direction helps Identifying Features ratchet up some tension, but the film’s closing twist goes against the wandering tale at its center.  The reveal is crushing but somehow also too easy. To some degree, the ending feels like Valadez undercutting the detached, glacial nature of her movie, which is exactly what made it work in the first place.