Classic Film Review: ‘Road to Morocco’ Conforms to the Racist Tropes of its Genre 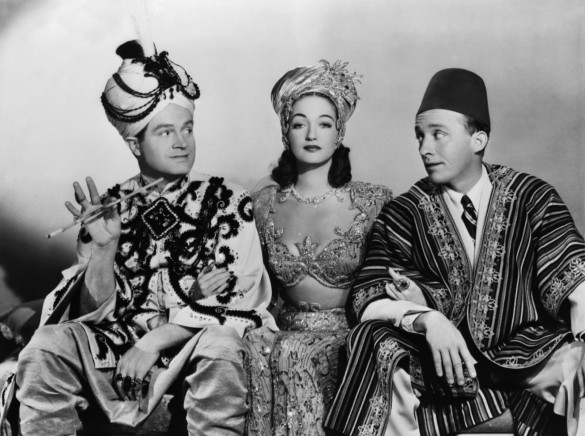 The Road to… series probably wouldn’t be massively successful today because all of the entries in the series feel similar to television sitcoms. They’re all fairly short, feature the same cast of characters playing very similar roles and moving through similar storylines. They would go to different locations in each film and Dorothy Lamour would wear a new set of dresses but they never radically changed the formula. Understanding their appeal could be difficult for modern audiences as they seem so dated and un-cinematic now. They’re racist, take a pro-imperialist viewpoint, and support the idea that women should be subservient to men. Not all of the jokes land and Bob Hope ends up sounding like a bigot but the self-referential style might have felt revolutionary at the time. The idea of being in on the joke made the audience feel like they weren’t being talked down to and it prevented the usual criticisms about the series being formulaic. If the writers were already taking jabs at themselves, it was difficult for critics to complain about their laziness. This is what made it different to other comedies from the period and families could titter as Bing Crosby winked at the camera and referenced the salary that Paramount executives were paying him.

I decided to dive into my evaluation of the series with Road to Morocco (1942). It is generally listed as the best of the franchise and has the added bonus of featuring a young Anthony Quinn. It was released following the success of Road to Singapore (1940) and Road to Zanzibar (1941). AFI listed this as one of the top 400 American films of all time and it would go on to inspire legendary screenwriter, director, and actress Elaine May. This set me up to have high expectations but I was also on the lookout for the racism that I was prepared for.

Jeff, Bing Crosby, and his good friend Orville, Bob Hope, were stowaways on a freighter but escaped on a life raft after it exploded. They end up in a secluded part of Morocco and hitch a ride on a camel that leads them into a large city. Jeff sells Orville to a slave trader and this causes Orville to feel animosity towards Jeff. Orville is happy when Princess Shalmar, Dorothy Lamour, takes him on as a concubine and tries to keep Jeff away from the palace by telling him that he is in danger. This causes Jeff to go after him and he is angered when he realizes that Orville enjoys being Shalmar’s concubine. Jeff sticks around and he and Shalmar have an innocent flirtation but she announces her intention to marry Orville. She is only marrying him because her fortune teller has told her that her first husband is destined to die within a week of their marriage. She plans to marry Mullay Kasim, Anthony Quinn after Orville dies. He finds out about this and tries to convince Jeff to stay and serve as Shalmar’s first husband. The fortune teller reveals that his prophecy was incorrect and the two men attempt to run away before they can be attacked by Kasim. The two men are left stranded in the desert and make their way into Kasim’s camp. Kasim and a rival Sheik are so busy fighting with one another that they don’t notice it when Jeff, Orville, Shalmar, and Mihirmah, Dona Drake, run away. They are all happy as they near the New York harbor.

The plot is really incidental in a comedy like this and it’s just an excuse to show off a foreign location and encourage Hope and Crosby to riff. Personally, I didn’t think that the chemistry between Hope and Crosby was all that sparkling. Hope does his usual routine and, perhaps because of over-saturation, I never felt like I was getting anything new from him. I could have just watched a tape of him hosting the Academy Awards back in the 1950s if I wanted to see him pull out this routine. On the other hand, I have always felt as though Crosby had a lot of potential. His dramatic performance as a self-pitying alcoholic in The Country Girl (1954), took my breath away. That meant that I raised my expectations when it came to his acting and I keep expecting him to dazzle me in these stodgy comedies. I tend to forget that he is better known for lame, aggressively conservative musicals like Going My Way (1944) and The Country Girl was an aberration in his career. He’s goofy and genial in this and yet I could never bring myself to be won over by his greasy, insincere charm. I could always sense that he was really a sad, middle-aged man reckoning with the mistakes he had made in his own life rather than being a carefree fool. I understood that Hope was meant to be wacky and outrageous while Crosby was the emotionally repressed straight man but I did not find myself howling with laughter.

I was also resistant to the thoroughly repugnant characters that they played. These films were supposed to serve as parodies of adventure flicks that were popular during these period. They do manage to poke fun at some of the tropes but they carry over the colonialist viewpoint. I don’t understand why most adventure stories have to involve a white, English-speaking man traveling to a financially struggling nation in which non-white people live. I am not against the idea of white people traveling around the world and settling into countries where people speak different languages and are members of different ethnic groups but why do these stories always have a white supremacist angle. You get through a few scenes in which the white man or men have a bit of fun being introduced to the social customs in these new countries but there is inevitably a moment at which they become dictators in the country, impress their values onto the local people and take on a bevy of sex slaves. We’re meant to nod along as they talk about ‘civilizing’ the natives and agree with them as they act like they are owed the right to take helpless indigents on as slaves. Road to Morocco mocks all of the native Moroccans and the far more sophisticated Americans who bumble around in the palace are implied to be better than them because of the values that have been instilled in them back in America. It’s hard not to feel uncomfortable when you watch white actors in brownface playing racist caricatures and this is, unfortunately, representative of the way that most middle class Americans would have seen Moroccans at the time.

The real highlight for me was Lamour’s singing. She has a honeyed voice that is reminiscent of Doris Day and as she delivers her breathy rendition of “Constantly”, you can’t take your eyes off of her. It is a shame that she was cast as a Moroccan princess when she was a white woman but she does bring a unique exuberance to the part. Hope and Crosby seem like they’re coasting and while Lamour is bring out her usual razzmatazz, she is as gorgeous as ever and never seems to take herself too seriously. I wanted to see more of her and I was saddened when I learned that she was later dropped from the series for being too old. Her appeal is timeless and I get why people kept on coming back for her.