Movie Review: ‘I Care a Lot’ Falls Apart in its Third Act 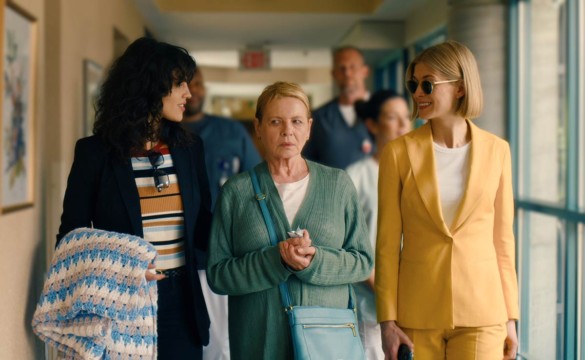 Synopsis: A shady legal guardian lands in hot water when she tries to bilk a woman who has ties to a powerful gangster.

Have you ever had that sinking feeling in the pit of your stomach where you can just anticipate that an experience that you were enjoying is about to sour on you? I had that feeling about 80 minutes into I Care a Lot (2020). The first two acts were deliciously nasty and the script accurately depicted the behavior of ruthless sociopaths who are driven by a desire to earn money and achieve a twisted version of the American Dream. You are fascinated by the anti-hero at the center of the story but for this sort of unlikeable character to remain interesting, she has to be challenged and tested. If she is just allowed to continue breezing through life without being shaken by anything that happens to her, we wonder why we are watching somebody failing to go through any progression. We want to see this sort of person suffer in order to atone for their sins and we enjoy seeing them humiliated because it forces them to up their game. I Care a Lot mistakes fascination with a character for deep personal interest in them and its ending is deeply unsatisfying for the audience. It throws the film so wildly off kilter that I struggle to hold onto the aspects of the picture that I had previously loved.

Marla Grayson, Rosamund Pike, serves as the legal guardian for a large number of vulnerable, elderly people. She has them involuntarily committed to rest homes where they are treated for conditions such as dementia and then proceeds to sell all of their assets and use this money to financially support herself. She gets into trouble when she takes on Jennifer Peterson, Dianne Wiest, and has her committed to a facility. She was not previously aware of the fact that Peterson is connected to a powerful Russian Mob family. Her son Roman Lunyov, Peter Dinklage, is determined to ensure that his mother is safe but also wants to win back some precious diamonds that Grayson stole from his mother’s safety deposit box. Suddenly Grayson feels threatened by him and realises that her life is threatened if she continues to move forward with this scheme.

I suppose I can’t reveal that much about the ending itself in terms of specifics but it will have you rolling your eyes and wondering why they didn’t take more risks. We are told that Lunyov is threatening and terrifying, we’re meant to believe that he strikes fear into Grayson’s heart and yet she easily fights back against him. It never feels like she is punching above her weight or being forced to go to extreme lengths in order to stay alive. We don’t get one of those thrilling moments where the smartest person in the room is thrown off balance and has to scramble to catch up with their adversary. Our anti-heroine is barely troubled by the warnings that Lunyov gives her. I think out concern for her is meant to hinge on her relationship with Fran, Eiza Gonzalez. We get to see the two of them kissing a lot but Fran just isn’t a well-developed character. That approach would work if she was just a pretty, subservient young thing who was a slave to money and attached herself to somebody who could keep her rolling in the green. When we’re meant to cry as her life is threatened, I just shook my head. The screenwriters put their eggs in the wrong basket and assumed that we cared about characters who just felt like plot devices.

It is maddening that this film so thoroughly squanders its potential because it does have quite a few assets on its side. Pike’s performance is well-modulated for the cynical, angry tone of the film and she rarely allows that icy facade to crack. The script prevents her from getting a few scenes in which she gets to be darkly funny. She is restricted to playing one note over and over again and while it is a very entertaining note, I couldn’t help but yearn for more. Wiest gets to have even more fun as she playfully taunts the woman who has been controlling her life. She’s under the influence of dangerous amounts of medication and could be reprimanded for threatening Grayson but she finds a way to quietly get back at her. The devious grin on her face reminds us that she is a force to be reckoned with. For once, she actually appears to be intimidating Grayson and Wiest seems to be revelling in the opportunity to play a character who is slightly darker than a lot of the mothers that she played in 1980s teen movies. Gone are the pearls that she clutched at in The Lost Boys (1987), now she’s playing a predator who will happily dish out punishment to anybody who crosses her. If there was more of Wiest, I wouldn’t have been complaining.

The pacing also feels zippy during the first two acts and we aren’t checking our watches as Grayson zooms from Peterson’s house to a courtroom and then back to her love shack. We do start to fidget during the overly convoluted second act and I think this is down to the direction. J. Blakeson knows how to dazzle us during the opening scenes as he confidently sets up the world that these characters inhabit and the central conceit but he doesn’t know where to go from there. So often he relies on close-ups of Pike’s smirking face, which are meant to be disturbing, or greets us with an establishing shot of a cityscape which is set to some synth-y composition from the repetitive score. He loses grasp of the tone of this story and his ill-fated attempts to cross over into the romantic melodrama genre are just clunky. He’s not utterly incompetent but he sets up expectations that he doesn’t follow through on. That almost makes it more painful when the third act is an unmitigated disaster.

You get the feeling that this could have been a delight if the script had gone through a few more rewrites. It becomes infuriating to watch at the 80-minute mark but you might like the first hour enough to stick around. This was made for Netflix so it is designed to be half-watched while you perform chores around your house or organise your schedule on your phone. That means that this might go down easy for some viewers. They’ll look up in the middle of watering their plants and be flabbergasted by all of the twists that have been thrown at them. It is never positive when you argue that something would be more enjoyable if you didn’t really focus on it and I don’t think that I Care a Lot deserves a passing grade simply because of the way that it is likely to be consumed.