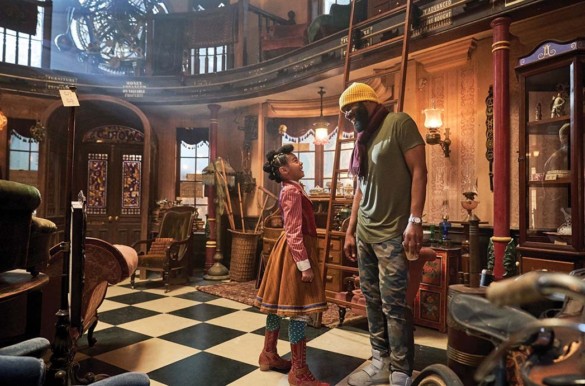 When the Academy of Motion Picture Arts and Sciences revealed shortlists for nine Oscar categories on February 9th, I was pleased to see three mentions for David E. Talbert’s holiday-themed musical, Jingle Jangle: A Christmas Journey. The film showed up on the shortlists for Best Makeup and Hairstyling, Best Original Score, and Best Original Song for “Make it Work.” Though the film still has a bit of an uphill battle to receive nominations in these categories, it was nice to see some recognition for a film that may have familiarities in its plot, but also features a sense of awe and wonder in a Christmas tale that centers Black characters. And of course, the technical aspects of the film are marvelous.

It would be a joy to see this film make the cut in any of the three aforementioned categories, especially Best Makeup and Hairstyling. The film should be in contention for a nomination in Best Costume Design as well. However, the category for which the film is most deserving of an Oscar nomination, in my opinion, is Best Production Design.

Production design is such a fascinating category, as the Academy tends to recognize various styles with the honorees. In the last decade, we’ve seen winners featuring expert inclusion of objects and styles that signify a time and place (such as Once Upon a Time in Hollywood), the construction of sets that echo the distant past (Lincoln), and grand designs with gorgeous colors that are a feast for the eyes (The Grand Budapest Hotel, my favorite winner of the 2010s). But perhaps most of all, the Academy has recently displayed a longing for epic, visual-effect-infused designs that evoke a sense of wonder, through the likes of Hugo, Mad Max: Fury Road, and Black Panther.

Jingle Jangle fits right in with this latter group of winners, employing CGI effects that blend with lavish sets and decorations. Much of the film takes place inside of a toy store, Jangles and Things, owned and operated by Jeronicus Jangle (Forest Whitaker). In the earliest scenes of the film, we get a taste of what the shop was at its height, and it’s beautifully brought to life by production designer Gavin Bocquet. The configuration works perfectly with the story, giving the shop a hometown feeling while also delivering on spectacle. The classic interior, complete with dual staircases and a balcony, helps to establish the assumed time period of Christmases past. Of course, this is expanded upon when we are introduced to the back rooms, nooks, and crannies of the shop.

Much of the joy elicited by Jangles and Things, however, is a result of the set decoration by Rob Cameron. In every shot of the early scenes in the store, there is some sort of toy or mechanism moving in the background. These are accented by stunning colors that draw the eye to everything happening. And though some of these aspects are created through the use of CGI, they each have their place in the setting. As time goes on in the film, and the shop is virtually shut down, the production design and set decoration are useful tools for maintaining the attitudes of Jeronicus. The bright colors are no more, but the extravagance of the shop of old remains. And throughout the unique location, there are surprises to be found, normally by his granddaughter Journey (Madalen Mills).

It’s enthralling to see the role the production design plays in the conflict of the film between Jeronicus and his rival Gustafson (played by Keegan-Michael Key). While Jangles and Things contains a charmingly clustered and old-timey nature, Gustafson’s is much more tidy and modern, placing it at odds with the village itself. It uses green in a way that evokes memories of the Emerald City in The Wizard of Oz, juxtaposing it with the less intense colors of Jeronicus’s store. This is underscored by twisting decorations on the wall, keying in on the snakelike personality of the character.

Of course, Jeronicus’s toy store, as well as the more modern toy store of his rival, would not exist without the holiday-themed town that surrounds them. Bocquet and Cameron built a charming but bustling little village, with shops and locations that maintain clues of uniqueness within the uniformity. For much of the film, it’s refreshing to step outside of the interiors and take in the delight of the town. This is especially true in a scene that consists of a huge snowball fight between the villagers, with the action and the design working together to provide a sense of community.

When it comes to effective production design, and especially Oscar-worthy production design, I tend to look for how the craft enhances the narrative and tone of the film. In Jingle Jangle, the production design and set decoration indicate the differences between Jeronicus and Gustafson as characters. They also successfully create a sense of place with the design, clueing viewers into the type of time period and location we are working with. It’s fortunate that the Academy recognizes both production designers and set decorators with the award, as Gavin Bocquet and Rob Cameron both do great work here that is worthy of at least a nomination.