Movie Review: ‘Hold the Dark’ is a grueling, appealing act 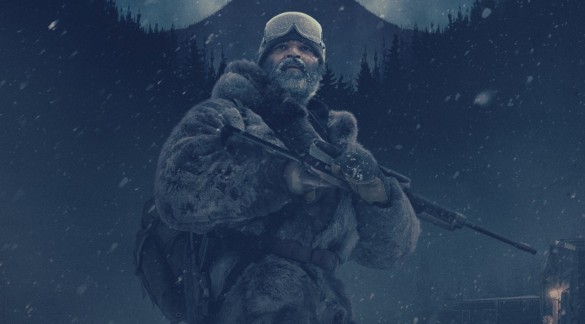 Synopsis: After the deaths of three children suspected to be killed by wolves, writer Russell Core is hired by the parents of a missing six-year-old boy to track down and locate their son in the Alaskan wilderness.

Upon reading the title, in an instant you can see yourself holding a broom while something rolls in. Something unpleasant. Maybe it’s nothing beyond the shadows that cast when the sun sets, but still. If helplessness — overwhelming helplessness — is the spice author William Giraldi wants to give the most piquancy to while writing Hold the Dark, he’d be glad in knowing that is also the most pronounced element in the first-A24-then-Netflix screen adaptation. So much so, in fact, that any attempt to connect with the footage will result in two-and-a-half-degree frostbite. Oof. But in making it difficult for viewers to embrace the frame do Jeremy Saulnier and company find a way to paint “dark” rightly, and from there does one find a thriller imbued with challenging goodness.

That, on top of finishing up another set of Three Colors — if anyone, especially Saulnier, is wondering.

In an Alaskan — true Alaskan — town that bears the name of a chthonic canine-esque spirit (Keelut), a death has happened. Or should it be “another”? As housewife Medora Slone (Riley Keough, convincingly tormented) has written to wolf expert Russell Core (Jeffrey Wright, minimalist but always compelling, thanks to those weathered eyes), her son is the third child to have fallen prey to the wolves. She also implores him to exact reciprocal revenge onto the canis lupus responsible for the tragedy, a task that will see its progression thwarted and greater evils unleashed when Medora’s husband, Vernon (Alexander Skarsgård, at this point a master of the icy stare), returns from the sun-scorched fronts of Fallujah.

People and wildlife have close-to-little distinction in Hold the Dark, and writer Macon Blair (Saulnier’s friend who also has a role here) makes it his mission to keep that idea within view. Always. What begins as invasions of the primitive world will, minute by minute, grow into shadowings of the civilized’s. Beasts in the wind are said to circle humans often. Humans will don bestial masks, sometimes literally, to fulfill needs that may blister tongues if uttered. “Minute by minute” is the key phrase here, which while letting every ounce of savagery into the system — a potently and casually directed shootout at the halfway mark will have your blood curdle even more than whatever scene that does so in both Blue Ruin and Green Room — it also means the mystery will unfold in a glacial fashion. The wintry landscape will appreciate the added “oomph” in its portrayal; can’t say the same for those who by now are madly well-trained to the harsh sights and quavering talks of arctic living.

That said, Hold the Dark has devices that make the brooding chill endlessly enticing. There are Magnus Nordenhof Jønck’s photography that assumes the eyes of the hunter or the hunted (and for either case never shies away from uber-realistic gory results); Ryan Warren Smith’s isolation-marked production design and Brooke & Will Blair’s cold strings that may invoke chants not of this plane. And even though all are a testament to Saulnier’s notable technical proficiency and — if we take into account the production’s scale — readiness to adapt, again they can’t let the dossier of the investigation enters our hands. Still, benching us is the riskiest-but-most-undiluted way to have us witness, or be on a collision course with, the trappings of this world. All deadly, if not to our body then to what is within. As Vernon’s friend Cheeon (Julian Black Antelope, intense) reminds local cop Donald Marium (James Badge Dale, ever alert) in an exchange, there’s no way to stop “the call,” or the howl of death.

Let go of the broom now.