Featured: The Show Is Behind The Camera: Truffaut’s ‘Day For Night’ 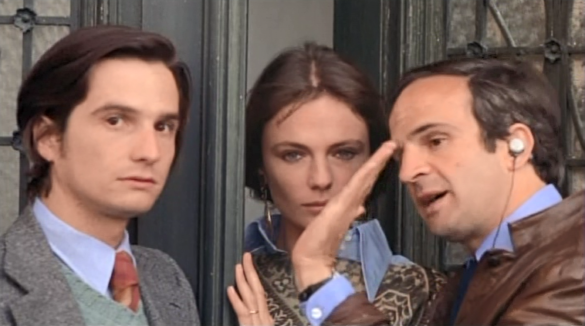 Francois Truffaut, trending from art house to mainstream, decided to turn the camera on himself in a composition of troubled actors, hidden loves, and technical misfires. The result is something that is very much like the title of the movie, in which day scenes are being shot at night. It is farcical and somewhat real, externally glorious and internally ugly, and it would be the ultimate movie about a movie in thanks to the genius of an ultimate cinephile. This is Day For Night and the world it presents is all neurotics and hard workers who present that scenes and sweat that goes into a basic scene for the fictitious Meet Pamela, a melodrama about a family in romantic peril – just like the cast and crew.

Love On The Go

First, there is Jean-Pierre Leaud as Alphonse, a heartthrob actor who struggles with handling love. During the film, Alphonse’s fiancée leaves him for the film’s stuntman. His neurotic ways have pushed his fiancee for another man and someone lower than him on the totem pole. An understandably heartbroken Alphonse wants to cure his pain by getting drunk and asking people in the hallway if they can give him money to get a prostitute. Instead, he has a one-night stand with Jacqueline Bisset, who plays Julie Baker, an actress being chased by a scandal with her new marriage. It results in a childish move by Alphonse and a scathing comment by the producer’s wife on why does filmmaking include everyone having affairs with each other and forcing emotions onto everyone else.

Emotions On The Fritz

With Julie Baker, her scandal involves a breakdown she has recovered from which has led to the marriage with the doctor who treated her. It takes one moment to shatter her recovery. Meanwhile, Séverine, a former diva actress, had a relationship with Alphonse, which then ended badly, and now the two are working together. It is less of love on-the-go and more of, “let’s get through with this.” In addition, she struggles to remember her lines and has a mini-breakdown on set, which is fixed by having her read the lines off-screen, similar to how Marylin Monroe had to do for Some Like It Hot. Something that kind of goes unnoticed is the respected (and only sane) Alexandre’s secret rendezvous with his young boyfriend, relaying the secrecy actors had to go through because of the risk of being exposed as gay. His sad ending is the reminder that stars are not prone to a sudden tragedy that befalls us every day.

Truffaut pokes into the process of set-placed action with take after take on an open set with extras walking around choreographed with the camera. As the director Ferrand, Truffaut works with his script editor in making the necessary changes, speaks with Georges Delerue who plays the score for him over a growing pile of film literature and improvising to get his melancholy actors in tune. One of the funnier scenes is when he tries to have a cat on cue drink a bowl of milk. It won’t and they try to force the cat to take it, but cannot. Another scene involves Séverine, where she learns her lines perfectly but continues to open the wrong door into a closet, not the hallway. The doors look the same and they are right next to each other. But lastly, it brings up an unexpected death of the one person who brought no baggage to the screen, which then alters the movie dramatically. It is very eerie to how Heath Ledger’s death altered The Imaginarium of Doctor Parnassus and its story.

Death Of A Relationship

A coda to this movie is the complete severance of ties between Truffaut and his fellow New Wave companion, Jean-Luc Godard. Within the massive success of Day For Night, one critic of the film was Godard himself, who walked out late in the film and wrote a scathing letter to Truffaut. He called the film, “a lie,” and Truffaut responded in kind in calling Godard a hypocrite and, essentially, “a piece of shit.” The split is from the fact that Godard, as a political radical, had kept the original techniques for his politically charged works while Truffaut moved on to modern stories that made him look like a sellout to Godard’s eyes. At the time, Truffaut was a major success critically and financially that Godard could never get from when he started because of his turn to make movies about realism that was very limited in appeal. It was a split that, sadly, should have been no surprise, but the details of their nasty divorce was a mere secret until Truffaut died. They never spoke to each other again, even though Godard tried to repair the relationship before Truffaut’s death. (Check out the doc Two In The Wave which examines their friendship until that bitter end.)

Day For Night won the Academy Award for Best Foreign Film and was also nominated for Best Original Screenplay, Director, and Supporting Actress for Valentina Cortese as the diva Severine. Godard called the film a lie; if it is, then it is a great lie and a fantasy worth going into, even in those tedious and exhausting episodes of prima donnas. If it is true, then Truffaut revealed a massive portrait of the perils of making a movie with so many crazy characters. It is an international story where everything is interwoven and scandals behind-the-scenes are often too common. From film history and from his own past, Truffaut constructs a funny, bonkers, fluid set of tales all mixed up on a movie set, the ultimate home for Truffaut. Sometimes, the best show is how the movie is made and not what is on the fine celluloid, cut and print.