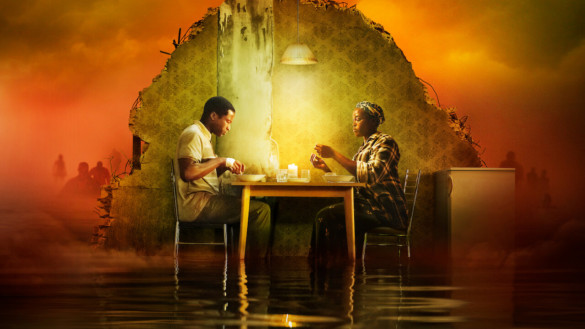 Synopsis: A refugee couple makes a harrowing escape from war-torn South Sudan, but then they struggle to adjust to their new life in an English town that has an evil lurking beneath the surface.

Sinister whispers of GO BACK and ominous messages like BEWARE written in big bloody letters have become haunted house movie standards. Some might even argue that they’re cliches at this point, and those folks would not be entirely wrong. His House, Remi Weekes’ feature film debut, takes a sub-genre rife with allegorical tropes and repurposes them. Horror has always been a genre of symbols—a means of delivering an artist’s thesis as viscerally as possible—and Weekes manages to say quite a bit without skimping on the terror.

It is truly insane that this is Remi Weekes’ first full-length narrative film. His command of the visuals is awe-inspiring. His cast is remarkable. His confidence as a director is downright superb. All things considered, His House is about as technically solid as it gets. And the thematic work is on the mark, too.

Plot-wise, a lot of haunted house films have a similar setup: a middle-class family moves into an old estate and supernatural forces are unleashed upon them. Mockers of haunting movies enjoy deriding the characters for not simply vacating the premises as if that’s always an option. Sometimes, as in the case of Burnt Offerings, the otherworldly presence wreaking havoc on the Rolfs will not allow them to physically leave the property. And other times the family is in such dire straits that they do not have the financial means to escape, like with the Lutz folks in The Amityville Horror.

With His House, Weekes takes this familiar blueprint and commandeers it to tell a story about asylum-seekers. Bol and Rial Majur have fled war-torn Sudan in search of refugee status in England. To do so, they risked their lives to traverse choppy sea waters on a small, overcrowded boat. Bol and Rial survived the journey, but not everyone who left with them did—including a young daughter. After a few agonizing months in a bureaucratic limbo, they are placed in temporary housing. Their new abode is dilapidated and rather large, relatively speaking. It’s a government-assigned home that would routinely be made to accommodate multiple families simultaneously. But Bol and Rial have it all to themselves, a privilege that does not go forgotten. But it soon becomes clear that something evil is lurking within the walls and around every corner…

Wunmi Mosaku plays Rial. Mosaku carries her character with a certain collectedness and a discernible gravity as well. Rial shows great awareness for everything they’ve done and been through to get where they are. She also possesses a palpable remorse, almost as if she thinks they don’t fully deserve to there, which may be a common feeling among the neighbors. One afternoon, for example, Rial asks a group of Black teens for directions, and they mock her accent and demand that she “go back to Africa.” And in response, she holds even firmer to her culture, especially as evidence mounts that something menacing lies in wait under hew own roof.

Bol, played by Some Dirisu, is much more determined to look like their new locale has always been their home. He makes conscious efforts to assimilate. He decides that they must dress like Londoners, and he chants along with the other men at the pub like they’re all old friends. Bol’s hope seems to believe that if he and Rial are viewed favorably by Englanders—meaning, if they are accepted—then their problems will vanish. And his insistence that they must shed their culture comes back with a vengeance since the demonic forces surging in their house take on a familiar form:

One of the big questions as the plot unfolds concerns why their house appears to be haunted by dead Africans—and if the souls of immigrants are in fact haunting the place, why would they terrorize fellow immigrants?

Dirisu gives an indomitable performance as things ratchet up. Like Rial, Bol harbors survivor’s guilt. How it manifests in him and how he chooses to address it are different, though. The film gives Dirisu several opportunities to shine as he gets to play into another haunting movie trope—because we can now add Bol Majur to the canon of crazed haunted househusbands! His obsessions bleed into a mania that brings about a fantastic downward spiral. And many of the film’s most frightening moments have Bol at the center.

Weekes effectively weaves practical and visual effects together, which both grounds the terror and renders its heights limitless. The interplay between the camera and the audience during these key scenes is highly creative. Weekes has definitely studied the mechanics of the genre ad nauseam. He demonstrates that he knows how to reinvent the wheel to fit his needs. His bumps in the night are more than well-calculated spooks. In His House, the jump scares aren’t meant to merely frighten—they’re meant to awaken.

Any horror aficionado who claims that horror is apolitical should shred every single one of the Silian Rail-lettered, bone-colored business cards that they just picked up from the printers yesterday. Horror is a genre with tons to say and does so in the gutsiest of ways. With His House, Weekes explores the horrors of being an immigrant in a xenophobic world, as well as the price some refugees pay in order to survive. Here it’s not a sentient house telling the protagonists to pack up and leave—it’s their racist neighbors. But Bol and Rial can’t go back to their homeland, because if they do they will surely die. And in order to have a future at all, they must reconcile with some reprehensible choices from their past. They have no other option but to stay and fight their literal demons.