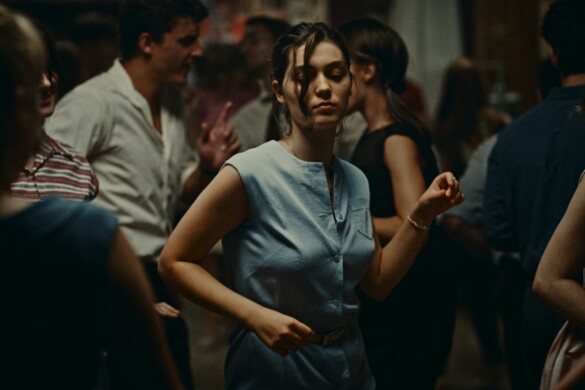 Synopsis: An adaptation of Annie Ernaux’s eponymous novel, looking back on her experience with abortion when it was still illegal in France in the 1960s.

Adapted from Annie Ernaux’s novel of the same name set in 1960s France, a young and wishful literature student’s, Anne (Anamaria Vartolomei), life and future are about to be disrupted when she accidentally gets pregnant. Her period is five weeks late, and she begins to get desperate; her studies aren’t going well, she is scared about what her friends will think about the situation, and a “condoling” doctor can’t help her. In fact, he lies to her about the drug he prescribed her; instead of causing is a miscarriage, it’s intended to nourish and boost the fetus. At the period of time in which the film is set in, abortion is banned, and a person can go to jail for it.

There have been multiple films about the perils of illegal abortions, such as last year’s Never Rarely Sometimes Always. Nevertheless, Audrey Diwan’s Golden Lion winner owes a debt to quite a few festivals winning pictures that tackle the same themes (the Palme d’Or-winning 4 Months, 3 Weeks, and 2 Days and Vera Drake, which also won the Golden Lion back in 2004). It carries the ramifications of all the above and shines a new light on a story we are all familiar with, accompanied by a stirring feeling of concern due to the thematic strengths. As mentioned before, Happening is set in 1963, albeit the film downplays the time period decorations and fittings, focusing more on the interactions between the characters and the story’s atmosphere to fill the backdrop.

That is what makes Diwan’s adaptation tick; it overcomes the “cliches” that type of narrative might have by having vérité and human-esque writing. Each character is portrayed so that they don’t feel as if they are in the opposites, being either good or bad people, which is a problem that haunts tales about the diverse hordes of ethos. Its best choice narratively is that it does not sit on the fence on its topics, never dithers on telling the story from Anne’s intimate and thick as knives point of view. There are even body horror levels of intensity, and Diwan doesn’t gloss over the encroaching procedures; after all, doctors can’t help, so there is no anesthesia involved. Regardless of those tough and uneasy moments, the movie has several heart-to-heart moments that are haunting while powerful due to their living state.

The main ingredient that makes L’événement work exceptionally is Anamaria Vartolomei’s impressive performance. Anamaria plays Anne as intense while scared for her future and caring yet tough-willed. Nobody will help her, so she goes on her way to “speak in tongues” to try and get someone who isn’t running from the situation and is inclined to help people in the same position as her. There is something special about her performance, while it takes notes from others like Sidney Flanigan in Never, Rarely, Sometimes, Always. In a way, it reminded me more of Hanna Schygulla’s work in Rainer Werner Fassbinder’s The Marriage of Maria Braun. Hanna expresses all her emotions with the body, like every other actress would do, but it’s her luminescent eyes that showcase the inner pain Maria is suffering. Because she needs to hide her attempt at getting an abortion, Anne must wear a mask in public and with the people she holds dear since trust isn’t much of an option, and that’s where the eyes come into play. Resplendent and marvelous, a gripping act as Anamaria needs to balance how Anne feels inside and how she wants to be perceived by the public, faking her true feelings.

Happening is a brutal and powerful watch about a topic that remains highly important and disputed as ever since still there are being reintroductions of anti-abortion laws. Most recently, in Puerto Rico, Proyecto Dignidad (PD as its initials in English) is eradicating a new bill that prohibits women from getting an abortion once a heartbeat is detected. And with bills and laws like this, people think we are actually moving forward? This is supposed to be a modern progressive country, yet they are trying to determine other people’s lives, specifically women. We need more films like this to show those people why abortion must be available for every woman. There is an episode of the critically acclaimed TV series, Veep, where they quote the following: “If men got pregnant, you could get an abortion at an ATM.” Audrey Diwan doesn’t want to make her film a morality tale; what it wants to do is show us, the audience, a time where abortion was treated as a felony. It isn’t the best film depicting the subject; however, it is an essential watch, now more than ever before.