Movie Review: ‘Halloween’ stumbles by caring more for crowd than itself [Fantastic Fest] 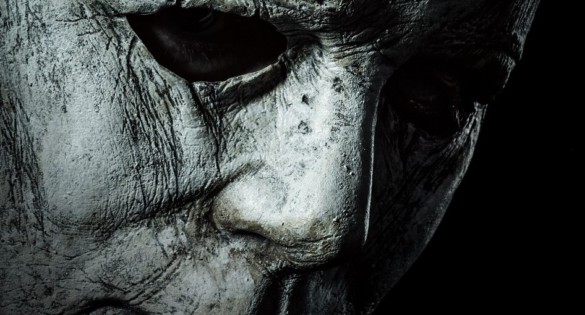 Synopsis: Laurie Strode comes to her final confrontation with Michael Myers, the masked figure who has haunted her since she narrowly escaped his killing spree on Halloween night four decades ago.

“There’s nothing new to learn. No new insights, or discoveries,” Laurie Strode (Jamie Lee Curtis, as magnetic as the silver coating her hair) said to two podcas– investigative journalists, Dana and Adrian (Rhian Rees and Jefferson Hall, underused), seeking to know what makes Michael Myers (Nick Castle, reprising his role) tick. While it’s right to interpret the words as they are — a plea to not reopen traumatic scars — it’s also not wrong to see them as an eulogy for the sequels, II, III, 4, 5, Curse and H20. Maybe the two Rob Zombie films, too. Thank Heavens for the lack of a “vs.” entry. With the embargo on elaborations, Halloween walks with a freakish ability to rouse viewers with little effort, even if afterward, after so much cheering, there’s no sign of the chills one once felt when The Shape was first on the loose. To not tremble at the sight of a 6-foot-plus killer whose presence will get the air going ding-ding-ding-ding-ding-dingding-ding-ding-ding-ding-ding? That’s new.

With a more pronounced fear factor, Halloween could have maximized another neat spice it has besides K.I.S.S-ing the timeline: How people’s mental alarms today will more likely ring for aliens, internet challenges, other nations, D.C. and so on than a masked assailant in the backyard. A tragedy, indeed, when this notion resides within Laurie’s two successors — daughter Karen (Judy Greer, sharp) and granddaughter Allyson (Andi Matichak, capable) — rendering all that time the elder Strode’s has spent training the former (with guns, sandbags and traps) and advising the latter (be vigilant or move to Mexico) as an unhealthy obsession, lasting warpings of childhoods. At least Allyson is always willing lend an ear, so there’s her survival odds being higher than most the moment Michael re-descends upon Haddonfield. Should be soon, though, since the bus transferring him to a maximum-security prison has crashed. Time to hide your kids, hide your lovers, hide your pets ‘cause the Boogeyman is slashing everybody out there.

Similar to announcing your location to a knife-wielder with a “Hello?” it’s a mistake to underestimate David Gordon Green’s ability to stage a set piece. The director of Pineapple Express and Stronger — hope there’s a hand under that jaw — shushes naysayers right away with Dana and Adrian attempting to interview Michael on the asylum’s garishly checkerboarded courtyard. The British duo don’t get much for their assignment, unsurprisingly, but our inner selves, on the other hand, will glee and howl in unison with the surrounding inmates as we take in Green’s tribute to the Old-Fashioned/the franchise’s acclaimed past in his direction; the camerawork from d.p. Michael Simmonds is serene and genre frequenter Tim Alverson wisely goes uncharacteristic with a calmer approach to the editing. What’s more, right as the scene reaches its peak, the film launches into the stratosphere when it cues a melody classical enough to resurrect a stage-left jack-o’-lantern (father-son John and Cody Carpenter & Daniel Davies handle the impressive score). If that isn’t an example of working the crowd, what is?

But in loving its spectators so much, Halloween forgets to rein in its destructive impulses the closer it gets to the 109-minute mark. The patient-yet-overwhelming menace in the early hours, in the opener and a long take that doesn’t waste its Oct. 31 holiday backdrop unlike The Predator, gives way to cuts that too often distort the sense of space and disrupt the setup. The Green-Jeff Fradley-Danny McBride script notably prioritizes the business of conjuring an entertaining time — through humor, callbacks and one switcheroo (that is here because…?) — than that but living up the sensations of the horror genre. The 1978 film is one writer short, and yet John Carpenter and Debra Hill does more. Righter. Still, it’s hard to deny that the laughs are effective (bless whoever authored that banh mi joke), the bloodletting does impress, and the final-hour confrontation brings forth the internal dynamics. Consider the possibility of being the only one in the auditorium with a frown, too. Nothing like peer pressure.

Still, Halloween comes from a good place, and for that it deserves respect. The film could have been an excellent continuation that also doubles as an equally so course-correction — it’s so close! — had its scarier edge been more sharpened and its timely wheels better spun. Ultimately, let’s not deny what we have, for at least Michael has an improved legacy now. Laurie’s, too. That’s an important lesson to take home with. It’s not as intensely highlighted, but no doubt the more crucial one.