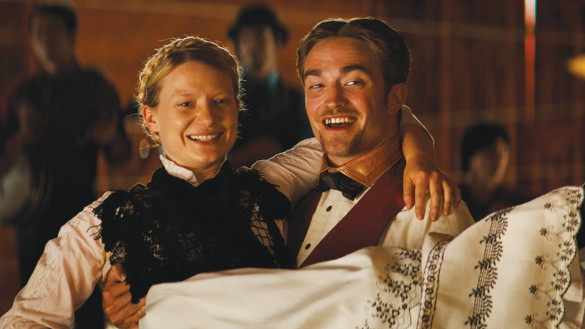 Synopsis: It’s the Wild West, circa 1870. Samuel Alabaster, an affluent pioneer, ventures across the American frontier to marry the love of his life, Penelope. As his group traverses the west, the once-simple journey grows treacherous, blurring the lines between hero, villain and damsel.

That’s a trite saying you might find on a greeting card of some kind, but in David and Nathan Zellner’s Damsel it becomes the prism through which everything is seen. Depending on your penchant for either optimism or pessimism, the unexpected may sound good or bad to you. Another way to put it is found in Murphy’s Law – whatever can happen, will.

The Wild West might just be the perfect stage for this kind of discussion, and the Zellners waste no time in showing us that fact. The opening scene pits a world-weary preacher (Robert Forster) up against an optimistic man headed west (played by David Zellner, himself). The younger man says he is headed west to put the difficulties of his life behind him. His wife died during childbirth. Yet here he is, wide-eyed and asking questions about the old man’s experiences in the great western lands. The old man responds with unsettling candor. “I hate to break it to you, but it ain’t gonna be no better out here.” The old man is headed back the other way. His preaching fell on deaf ears. By the end of the conversation, he has literally given up everything save for (some of) the clothes he’s wearing.

To say this scene has shades of No Country for Old Men is putting it lightly. The opening shots are clear shout-outs to that Coen Brothers Best Picture winner, and the theme of an older man throwing up his hands against the harshness of life isn’t hard to draw connections to either. And later in the movie, we even meet a character named Anton. Maybe the callbacks to my favorite movie of all time were part of the reason I was so enthralled by this opening scene. Certainly the acting plays its own part too. But the opener takes on new meaning when coupled with the rest of the film. As Damsel shows repeatedly throughout its 113-minute runtime, life has many unexpected turns in store for all of its characters.

From there, the film cuts to a town where a man named Samuel (Robert Pattinson) is looking for a parson. Pattinson has reached the level where I’m interested in a movie solely because of his involvement. He was fantastic in the Safdie Brothers’ 2017 release Good Time, and he is once again fantastic here. You no longer have to associate him with his teenage heartthrob beginnings in the Twilight series. He’s done too much good work since then for that.

Samuel is looking for a parson, though it is not until later that we learn why. It just so happens that Parson Henry is in town (this is the younger man from the opening scene to whom the old preacher gave his clothes). Samuel has sent a telegram to Parson Henry with details of a job. We don’t learn what these details are in fact, except that Samuel has agreed to pay Parson Henry $60 for his services. He docks the pay by $0.50 when he finds the Parson drunk and laying on the beach. Not exactly how one might expect to find a preacher.

At this point, I must pause to mention the film’s cinematography and costume design. Especially in these early scenes along the Pacific coastline, the visuals are strikingly beautiful. Later, the film’s visual eye will find similar flair in the wild countryside, but these opening scenes set the stage beautifully. The costume design stands out for its period detail, but also for other reasons of narrative importance. Already I’ve highlighted the importance of the preacher’s wardrobe, and that takes on even more significance as the film continues.

Even after the opening scene, it is impossible to escape the influence of the Coen Brothers on this film. It goes far deeper than the fact that this film is also made by a brother duo. There’s the black humor, the oddball characters with local accents, and the memorable fringe details (a perfect example in this film is the presence of a miniature horse named Butterscotch). It’s a daring risk to tread in the lofty territory of the Coen Brothers, but I think the Zellner Brothers show that they are more than up to the task. Since I am such a fan of the Coens, the way the Zellners wear that influence so clearly on their sleeves in the early going did pull me out of the film just a bit. Some of the early scenes are laugh-out-loud funny, but they don’t always serve the story. The Coens have perfected the use of this kind of black humor, because they always find ways to unearth it within the story. One scene in particular (a criminal being hanged outside the city) seemed like it was just thrown in to create an opportunity for this kind of gallows humor (pun intended). But, as the story continues, I think the Zellners settle into their own style and themes in a more satisfying way. The film continues to be funny, but the later scenes find the humor within this unexpected journey.

I’m not going to discuss much of the plot of the film once Samuel and Parson Henry leave the town for fear of spoiling the experience. Suffice it to say that the film goes all in on its theme of life bringing unexpected turns.

What I will mention is that Mia Wasikowska gives a fine performance as Penelope. By this point, you may have been wondering when I would ever get around to the reason for the film’s title. Well, that would be Penelope – the lost fiancé that Sam is seeking. Now you can connect the dots as to why he specifically needed a parson to come along with him. But what ensues from there I doubt you will expect.

This film will get you thinking about whether optimism or pessimism is the best outlook in face of life’s struggles. I tend to be an optimist, and that surely affects how I approach this film. I firmly believe that one should come to a film and accept what it has to give rather than trying to project your feelings onto it. At the same time, each person is different and will come to each film from different points of view. Finding the middle ground there is difficult when trying to analyze films, but I think it’s necessary work. This is why one person might look at the same film differently at various stages of life. We may be the same essence of ourselves as we age, but our various experiences certainly change us.

And maybe that’s just it – we change. People often say that “life goes on.” Maybe what this film is encouraging us to see is that life often brings us to unexpected turns. That will happen. Heroes can just as easily become villains, and damsels in distress may not need saving. But even amid these happenings that we cannot foresee, we can push forward. We can keep some small kernel of ourselves even though we may be forever changed in drastic ways.

Life is hard, and yet it goes on.