Movie Review: Buckle up and ride the ‘Give Me Liberty’ express 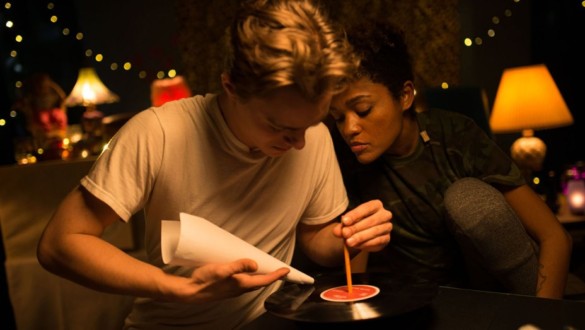 Synopsis: In this freewheeling comedy, medical transport driver Vic risks his job to shuttle a group of rowdy seniors and a Russian boxer to a funeral, dragging clients like Tracy, a young woman with ALS, along for the ride.

As someone who gets quite anxious at just the thought of being even slightly late for anything, I found the premise of Give Me Liberty pretty stressful. Furthermore, I also for a time, like our protagonist, used to drive van-loads of loud, capricious people around while they occasionally yelled at me. So my sympathies were absolutely with him from the jump.

My passengers were entitled film and commercial producers; I was their production assistant. Vic (Chris Galust), on the other hand, drives a medical transport vehicle. His disruptive folks onboard, though, are not his regular passengers but rather a small mob of elderly Russians who commandeer his van when the bus that was supposed to take them to a funeral for a friend doesn’t show up.

They’re the other residents from the apartment building where Vic lives with his possibly senile grandfather. He cares about them, so he risks his job to chauffeur them across town to the cemetery, while attempting to pick up and drop off his legitimate passengers along the way… Lots of humor ensues.

Director Kirill Mikhanovsky assembled a relatively large cast of non-professional actors for his latest venture. Reportedly, many of these folks came from a Milwaukee vocational school for persons with disabilities and a community of Russian immigrants. The performances of this ensemble cast have an unencumbered nature to them—a sort of instinctual naturalism that years of perfecting a craft can beat out of some artists.

A true standout among this vibrant cast of characters is a young woman named Tracy (Lauren “Lolo” Spencer). Spencer is one of this film’s main breakout scene-stealers. She’s a welcome dose of comedic relief in this already-madcap caper. Tracy is a lively and resolute presence in Vic’s van as someone not to be crossed—or else her sharp tongue will slice you in half. See, unlike most of these passengers, she’s actually supposed to be riding. Her saltiness at being delayed is delightfully palpable and great fun to watch. Spencer proves that she deserved that Film Independent Spirit Award nomination, and I wish her a fruitful career.

The other supporting standout comes in the form of the marvelously chaotic Dima (Maxim Stoianov). As ridiculous as Give Me Liberty gets at times—and it can get ridiculous—the audience can always count on Dima to up the ante and thereby somehow ground the goings-ons. Part of me doubts that such a magnanimous person could even exists, but it works nonetheless. In the vein of Peter Stormare, Stoianov feels like a type of character actor who, if he plays his cards right, could have a monopoly on all of Hollywood’s vaguely Eastern European roles—the funny ones as well as the villainous ones. Because he deserves them.

Of course the outright star of the film is Galust, who is simply wonderful in his debut turn, giving a beautifully understated yet multi-faceted performance. Film Independent deemed him worthy of a nomination for Best Male Lead, and I’m inclined to agree. Galust is able to carry Give Me Liberty with a commanding performance that never slips into showy territory. He has a warm stoicism that feels very at home in this era of confident, low-key young actors… (We all ought to be so grateful that Dane DeHaan and Timmy Chalamet have brought this love child of theirs into the world, for the sake of indie cinema and for our eyes.)

As a storyteller, Mikhanovsky definitely does not shy away from the real world issues that plague all corners of the United States. For what is in many respects a “road movie,” the characters of Give Me Liberty do not travel very far—just a handful of in-town miles—because they keep encountering detours caused by protests. The non-white civilians of Milwaukee have had it with the police violence in their city, and their justifiable urban disruptions create obstacles for our protagonists—obstacles that must be addressed in order to move forward. If for nothing else, Mikhanovsky must be commended to for the representation found in his film.

The folks of Film Independent chose Give Me Liberty as the winner of their John Cassavetes Award, which is given to the filmmakers of the best film with a budget below $500,000. And let me tell you… half a million dollars may sound like a substantial sum, but it’s truly not very much money in the production world. The lines of expenditures add up pretty quickly. Looking at it, Give Me Liberty is undoubtedly a low-budget picture, but Mikhanovsky’s shoestrings must also be magic wands, because with an ensemble and geographic footprint of this size… Wow! I just hope the entire cast and crew were paid well, or paid period. (I’m doubtful, though.)

Bottom line: Give Me Liberty is an eccentric little comedy with plenty of barely contained haywire and whole lot of heart. Plus, I’ve been to Wisconsin, and let’s just say I can see the events of this story unfolding there. Take that as you will.