Movie Review (GFF): Victim(s) is a Tense Look at Our Current Society 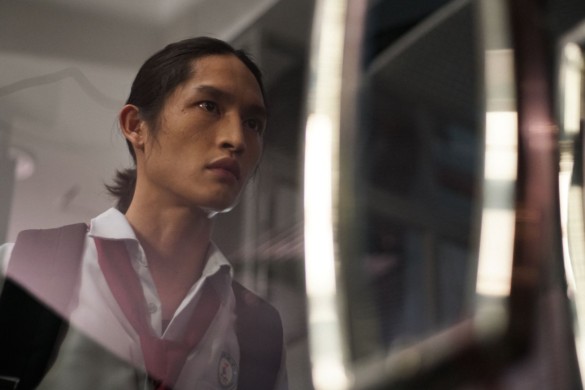 Synopsis: When both the victim’s mother and the murderer’s mother find out about the unknown sides of their sons, they have some tough decisions to make in this “We Media Era.” What we see may be the facts, but not necessarily the truth.

Victim(s) is a tense, tough examination of the school bullying trend and the tragic circumstances it can create. Layla Zhuqing Ji’s debut feature packs a lot of heart in it’s best moments, and is achingly sad in others, but is almost always gripping. While there will be comparisons with Derek Tsang’s recent Better Days, itself an excoriating look into the effects of school bullying, but Victim(s) deserves to stand on its own. It’s not afraid to tackle dark, heavy themes which others might flinch from and boasts some very good acting, specifically from its main trio.

Chen (Fu Jianxun) finds himself in a media circus after he stabs fellow classmate Gangzi (Kahoe Hon) to death outside an ATM one rainy night. As his trial looms, several students are interviewed by the police about what might have motivated Chen to commit such a heinous act. It turns out several students have theories, most revolving around new transfer student Qianmo (Wilson Hsu) who the boys were said to have been fighting over. Meanwhile Chen and Gangzi’s families battle with each other and as well as the media over who was to blame for this. Chen’s mother Mei (Huang Lu), is blamed for inciting violence in her child, mostly because her job involves working with graphically violent video games, while Gangzi’s mother Gu (Remon Lim) works at a foot massage parlor and is on the brink of poverty, suggesting the crime was possibly class motivated.

The setup is slow and often encumbering. For such a dramatic situation, Ji is in no hurry to reveal the secrets behind the murder. It tests the viewers’ patience, but stick with it, and Victim(s) suddenly blossoms into an fascinating insight into the lives of these students. Ji takes us back to the beginning, and we get to see who Chen, Gangzi, and Qianmo really are and why this whole horrible affair was never about a typical teenage love triangle at all, but something far more sinister and complex.

Victim(s) is at its best in these flashback scenes, which shows the complicity of the school system in allowing bullying to persist. At one point Gangzi mercilessly beats a student for his money, only for a teacher to walk in on the scene. The teacher is clearly rattled, bows his head, and exits the building as quickly as possible. It is a shocking moment and highlights the part teachers play in the dynamics of school children. The school itself appears problematic: image is everything, so smoking is forbidden, yet bruises with suspicious explanations are dismissed out of hand. This don’t-ask-don’t-tell policy allows for a social hierarchy to bloom, especially in a school where the children are made to sit according to academic rank. It is a damning indictment of the school system that such things are allowed to happen.

Elsewhere a different kind of bullying takes place with Qianmo. It is suggested that she transferred to her new school because of an illicit affair with one of her teachers. This leads to her female classmates nicknaming her “sex doll” and shaming her at every available opportunity. The bullying here is not physical, but rather emotional. It’s a salient point: males and females often have their own forms of bullying.

What is not said, but is certainly hinted at, is Qianmo’s relationship with her teacher. A student labels it as seduction, implying Qianmo was the instigator, but reading between the lines it seems it was perhaps the opposite. It would have been interesting to follow this plot thread a little further but Ji has other things on her mind, specifically the escalating tension between Chen and Gangzhi, as well as the latter’s inner life which he is desperately trying to keep secret.

To say more on the plot would be to spoil the unfolding drama. It is deftly done; crucial moments are teased out, while the camera lingers on the reactions of each participant. Ji shows how the dehumanizing effect of bullying is a mask for other issues. Homophobia, sexual shaming, and the pressures of assimilating into a social hierarchy meld together to paint a picture of survival of the fittest. Camera phones record videos of humiliating moments to blackmail or betray students with, bluffing and proxy battles are commonplace to avoid the truth being revealed. It is an exhausting environment, and one captured so well and yet so brutally.

Finally, the acting itself is strong. Jianxun, Hon, and Hsu are all superb in challenging roles, evoking the desperate anguish of survival school with aplomb. The adults – thought they have less to do – are excellent in the later scenes, showing the grief and confusion the parents are suffering from not understanding the senseless violence. Victim(s) is an excellent parable about the toxic dynamics of the school environment and how the school establishment themselves are complicit in allowing it to happen. Bolstered by great acting and an excellent visual style, it’s a gripping thriller of a movie if you can make it through the opening twenty minutes.