Movie Review: ‘First Reformed’ wants to know if God will forgive us 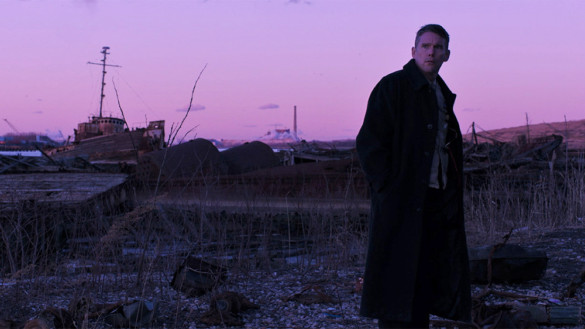 Synopsis: A priest of a small congregation in upstate New York grapples with mounting despair brought on by tragedy, worldly concerns and a tormented past.

This is the question that is being asked throughout the entirety of the newest film from legendary writer Paul Schrader, a question that makes this one of the most interesting, thought provoking films of the year. How would God feel if he found out what we did with his creation? And more importantly, how would he feel about us, as a population, doing next to nothing in order of fixing the damage that we have afflicted on this world?

First Reformed follows Reverend Ernst Toller (Ethan Hawke), a man that recently turn back to the church after his marriage fell apart due to his son enlisting in the military and dying overseas in Iraq. He is the Reverend at the First Reformed Church in the small town of Snowbridge, New York, a job was given to him by Reverend Jeffers (Cedric Kyles) at Abundant Life Church, a mega church within the same town, but more on that later. After service one morning, Toller meets Mary (Amanda Seyfried), a pregnant woman who asks Toller to speak to her husband Michael (Philip Ettinger), whom seems troubled by the reality of the upcoming child. But Michael is not scared of becoming a father, he is an environmentalist and is scared to bring a child into a world that is dying due to global warming.

While this is going on, Toller is also dealing with the 250th anniversary of the church he resides over. He is dealing with the pressures from Abundant Life and Edward Balq (Michael Gaston), a business man that owns an industrial company within the town, to make sure everything goes over well with this ceremony. Balq feeds Abundant Life who feeds First Reformed, something that doesn’t go over well with Toller. And as the film plays out, both stories collide upon Toller, who we see throughout the film as someone struggling with his health, as well as his faith in the world around him.

While the films story on the surface about a man struggling within his life and beliefs is fascinating enough as it is, Schrader’s film is not singly focused on that. This film is a subtle yet bombastic battle cry to not just one man or one woman, but to all human beings on this planet. Schrader argues that when the world is gone, religious beliefs and disagreements we have about climate change won’t matter because there won’t be a world to live in. Schrader is not bashing religion in this film, on the contrary, he wants their leaders and followers to stop resisting and join the party, believe the science so solutions can be made. Schrader screenplay is a multiple layered sermon and with that, Hawke is the perfect vessel to preach Schrader’s gospel.

Hawke, whose work over the last couple years in films like Boyhood, Born to Be Blue and Before Midnight, has given new life to his career and made him one of the best actors working today. If all those roles have been appetizers leading to a main course, then this is one hell of a main course. Hawke’s performance is one of the most realistic portrayals of someone with a crisis of faith that I have ever seen put to film. Just like Robert De Niro’s cab driver in Taxi River, Hawke takes a usually innocent profession, a priest, and gives him a sense of terror and unpredictability that will define the rest of his already glowing career. All the supporting character, Seyfried, Kyles, Ettinger, Gaston and Victoria Hill play their parts beautifully but they are here to either heal or hurt or help Hawke’s Toller make his final decisions. Those decisions lead to what could be the most divisive ending for the rest of the year, and one that I have been thinking about since the moment I left the theater.

But back to Schrader, whose direction is as simple as you can find it, yet is the right move for the film. A close box frame on the screen signals that this director wants you to feel uncomfortable about what you are hearing and seeing on the screen. You aren’t going anywhere in his hands, keeping your eyes close to the screen, right where he wants them, making you focus on every word and action being said by Hawke and company. Like I said before, it a battle cry, an awakening if it were, and you need to hear what Schrader has to say. Our world is falling apart, in its first original form, and regardless of what you think about the subject of climate change, Schrader is set on making you feel something by the time the screen goes black.

It’s not often an artist is given the tools he or she needs these days to make the kind of film that challenges us in the best sorts of ways. What Paul Schrader has done is very similar to what George Miller did with Mad Max Fury Road, in that it doesn’t matter how old you are, or how long you have been out of the game, you can still innovate and take us into the next phase of true cinema.