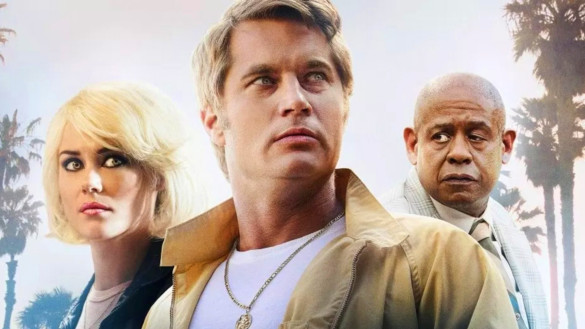 There is a podcast called Heist Podcast which, unsurprisingly, deep dives into a different heist every episode. That they are well over a hundred episodes at this point should be an indicator of the number of heists that have taken place over the course of modern human civilization. Of course, Hollywood is no stranger to this phenomenon: heist capers such as Ocean’s Eleven, The Great Train Robbery, Snatch, Point Break, all cashed in, to varying degrees of success.

Episode 37 of Heist Podcast is called Nixon’s Milk Money. It tells the remarkable true story of a group of small-time criminals from Youngstown, Ohio who set out to rob a bank in Southern California which housed “dirty money” secured by the residing President at the time, Richard Nixon. The criminals managed to steal over $9 million from the President before eventually coming to justice. Strangely enough, given the inherent ripeness of heist movies in any financial climate, this story never made its way onto the big screen before now.

Travis Fimmel (of Vikings fame, and here still as impossibly blue-eyed and charismatic as ever) plays Harry Barber, one of the five men involved in the heist. Barber is obsessed with Steve McQueen (which gives the movie its title) and is a relentless motorhead, stealing several top range cars such as a 1969 Mustang GTO and receiving as many as 41 speeding tickets in a single year. When we first meet him he is relaying the story of the heist to his oblivious girlfriend (played by Rachael Taylor of Jessica Jones fame) in a small-town diner. Thus the framework for Finding Steve McQueen is established: mostly we see things from Barber’s point of view as the somewhat hapless criminal finds himself entangled in his uncle Enzo’s scheme. Enzo hates Richard Nixon, and when the opportunity to rob the President blind appears Enzo can’t help himself, much to the consternation of his business partner Pauly (Louis Lombardi) who rightly believes the job is more trouble than it’s worth. The crew head down to California and devise a plan which predictably goes pear-shaped and leaves Barber on the run from FBI agent Howard Lambert (Forest Whittaker), who tracks them under the shadow of the impending Watergate Scandal.

Director Mark Steven Johnson imbues Finding Steve McQueen with more comedic elements than you might expect. It was a wise move; under the focus of Watergate (and given the state of US politics over the last four years), there could have been a much darker tone struck here. Instead, Johnson keeps things light; the crew finds themselves in a fish-out-of-water scenario among the liberal, unrestrained culture of 70s California, and Fimmel himself plays Barber as hilariously inept and dim-witted, while always keeping you on side with his effortless charisma and likeability. Elsewhere Pauly and fellow crewmember Ray (Entourage‘s Rhys Coiro) are blown away by a new invention in California called a Hot Tub, and Taylor gets a fun scene which sees her downing boilermakers in a bar on the day of her cheating husband’s funeral. It all comes together well enough and is nicely juxtaposed with the real events we know of (John Finn plays Lambert’s boss at the FBI, Mark Felt. Better known to most as Deep Throat) as they loom in the background.

There are a few sticking points, however: for example, the dialogue is a little too on the nose at times. Characters really want you to know we’re in the 70s and will expound on pop culture references such as the attractiveness of Sally Struthers or a Richard Bach novel called Jonathan Livingston Seagull. We get it, it’s the 1970s. As well as this, most heist movies follow one of two routes: there’s the Rififi route – solemn, serious, weighty – or there’s the Ocean’s Eleven route – fun, upbeat caper with fast montages and memorable dialogue – but Finding Steve McQueen seems to strike out for the middle ground between these two and so doesn’t entirely pull off either one quite as well as you’d like it to. It’s perhaps a nit-picking point, but it feels like Finding Steve McQueen doesn’t quite gel its disparate elements very well at times, or strike a consistent tone. In an early sequence, Barber addresses the camera directly on a few occasions, in a slightly tongue-in-cheek, meta way. This is then dropped for the latter half of the movie and it feels a little jarring to go from moments like that to Whittaker’s gruff detective trying to figure out how Nixon ties into all of this.

Ultimately, Finding Steve McQueen is a perfectly fine heist caper. If that seems like it’s been damned with faint praise, it shouldn’t; Johnson doesn’t seem to want to do much else except tell a fun story with likable characters, and this he does well. Fimmel is typically excellent and engaging, one can’t help but wonder why he isn’t a much bigger star by this point, and the supporting cast all bring interesting elements to the story (although Jake Weary is tragically underused as Barber’s brother, Tommy) which prop it up. It doesn’t do anything new for the heist caper, and sometimes struggles to find its tone, but during its best moments, it is enjoyable and occasionally hilarious. For fans of Travis Fimmel, this is one to watch.