Movie Review: Everyone needs to relax in August: Osage County 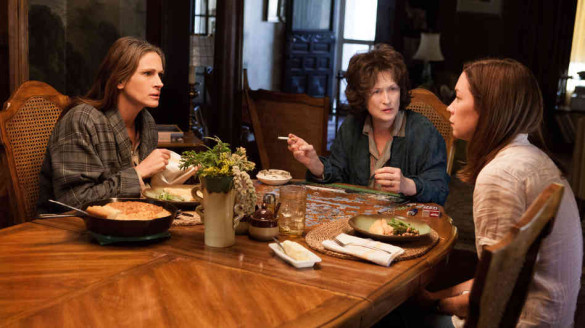 Synopsis: A look at the lives of the strong-willed women of the Weston family, whose paths have diverged until a family crisis brings them back to the Oklahoma house they grew up in, and to the dysfunctional woman who raised them.

DIRECTION
John Wells, who’s only other feature was The Company Men, brings us the stage play August: Osage County to the big screen. And the big question everyone wants to know is, does it translate well from stage to film? Well it depends on what you’re looking for. Wells’ Osage County definitely feels like a stage play in the sense that there is very little narrative but it’s filled with lots of heavy dialogue and acting. The film even opens in a meta style with Sam Shepard speaking directly to the audience, so you feel the stage aspect immediately. While Wells’ lacks in showcasing any sort of story, he does let the actors act and he sets an aesthetic that is appropriate. We’re dealing with small-town middle American with a middle-class family, which is going to feel relatable to a lot of people. I haven’t seen the play, but the way Wells tells this story doesn’t make it appealing.

SCRIPT
The script is a mixed bag of craziness and genius all at the same time. In terms of an overall narrative, it’s lacking big time. It’s simple, which isn’t a bad thing, but there’s not much concrete there to solidify it. However, it’s deep and dark in terms of the themes being portrayed and it comes across in it’s characters, which at least gives them purpose. It’s also what makes the film feel like a play. The dialogue is heavy and goes into some really difficult places that will either engage you heavily or drive you away fast. The brilliance of the screenplay is the interaction of the characters and the consequences of actions within a family and how an upbringing can heavily influence you. Those themes and characteristics come off realistic and it’s what drives these characters. The kind of situations they are forced to deal with is arduous but something some families have to deal with when it comes to death, cancer, and the devastation that families sometimes have. The ending is ambitious and in this case, not sure if it’s appropriate. However, it’s also a play and feel like a play, so it kind of makes sense.

PERFORMANCES
The performances are outstanding. Meryl Streep is incredible and her aesthetic is almost sickening. As an older woman who has mouth cancer, she looks very sick and she does a great job of portraying that. It’s not just her strong dialogue but she loses her mind and showcases that in her actions. Julia Roberts is brilliant as the daughter who is forced into making family decisions, and compelling in doing so. Her dialogue is delivered with passion and hilarity in many case. She’s amazing. Roberts also has some great dynamics with Ewan McGregor too, which is a strength to the film. I kind of wanted to see more of them together. Margo Martindale and Chris Cooper don’t have much to do but when on screen they have some pretty great moments. There’s one emotional moment they have toward the third act as well that was touching. This is a rarity, and while he was okay, Benedict Cumberbatch was miscast in this film. He does a fine job but sometimes that British accent came through when trying to have a mid-western dialect. Sam Shepard has had some of the best small roles we’ve seen in film lately. He’s not in the film a ton but he has a presence when he’s there. However, the biggest achievement in this film has to be Abigail Breslin. I can only imagine she was intimidated out of her mind when acting in the same room with Streep, Roberts, McGregor, Cooper, Cumberbatch, Martindale and not to mention Dermot Mulroney. She holds her own though and has some really nice scenes.

SCORE
Gustavo Santaolalla has an okay score but the film is too saturated with actors and dialogue that you’ll mostly miss it. There’s some nice moments where it’s showcased, along some good choices of soundtrack music that make the film a little more engaging. Overall though, you’ll mostly miss this score and it just fills up the background space that’s needed. Nothing more, nothing less.

FINAL THOUGHTS
August: Osage County has some fine actors and some fine acting in it but the narrative is lacking a foundation and it leaves the viewer to decide whether or not to buy into the characters. The family dynamics feel real and authentic in most cases, however some scenes and narrative pieces are very contrived. The film definitely speaks to some great family themes though that are important and the consequences of parents’ actions. The film overall is Oscar-baity bit nothing that stands out other than a few performances. The dinner scene was great but perhaps a bit over-played by the end. There are some good things here, in particular Streep and Robert. Roberts is absolutely magnetic.