Movie Review: ‘Eternals’ is a Visually Astounding, Narratively Flawed Entry in the MCU 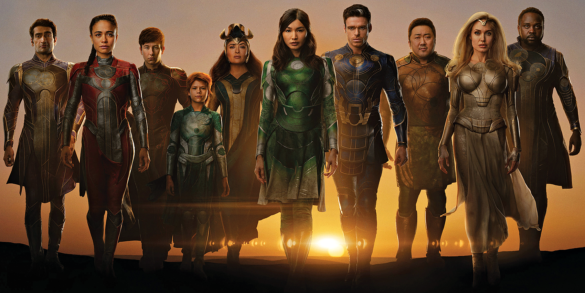 Synopsis: The saga of the Eternals, a race of immortal beings who lived on Earth and shaped its history and civilizations.

Eternals is the latest entry into the MCU, directed by Oscar Winner Chloe Zhao. Hot off of the success of Nomadland, the academy award-winning director has been given the opportunity to helm Marvel’s Eternals. The film follows the expedition of Earth by a group of beings created to protect Humanity from the Deviants, over the course of seven millennia. This group of individuals, comprising Ajak, Sersi, Ikaris, Thena, Kingo, Gilgamesh, Sprite, Makkari, Phastos, and Druig, all have their own feelings towards the planet Earth and the humans that inhabit it. If that description feels ambitious, it’s because the film is ambitious. There’s a lot of exposition that needs to be conveyed to the audience for this film, due to the size of the cast, the duration of their lives, and thus complex relationships with one another. And luckily, the film changes the Marvel formula to better tell this story. In utilizing a non-linear plot, the film is able to take us through each of these characters’ lives on Earth, showing us important moments of the past. And these moments in the past are littered with references to ancient mythology that is sure to excite. But in spite of the talented crew behind this film, Eternals is unable to carry the weight of its ambitious scale.

The core issues with Eternals are largely found in its script, which lacks subtlety and emotion. To compare it to another 2021 film, Eternals shares the writing problems of Candyman (2021). Both films want to throw around big thematic ideas. So the writing achieves this as efficiently as possible, solely comprising of exposition and explicit theme statements. And while some films are able to move past this, Eternals doesn’t. The pacing of Eternals rarely finds time to sit with these characters, as the story needs to move at a breakneck speed to be told in two and a half hours. And that really holds Eternals back from being a truly great movie. There are plenty of significant moments throughout Eternals that have to be skipped over due to the scale of the project. And there are a lot of dialogue exchanges that tell the audience something important happened in the past, though we don’t see them.

But that isn’t to say the entire movie feels rushed. There are some of the sequences that slow down. These are the sequences full of subtle acting and gorgeous cinematography. Even without dialogue, these sequences feel more impactful to the story than any of the words the characters say. Those sequences are the highlights of Eternals, where we see the craftsmanship of everyone involved on display. From the cinematography by Ben Davis to the rousing score of Ramin Djawadi, there’s a hypnotizing effect at the core of Eternals. This is accentuated by Eve Stewart and Clint Wallace’s work on the production design, which brings historical locations like Babylon to life. It’s infinitely grand in scale, and yet infinitely personal in these sequences. And that is largely to do with the performances Zhao is able to get from the stellar cast. Gemma Chan and Richard Madden are stellar, making the relationship between Sersi and Ikaris believable. Angelina Jolie, Kumail Nanjiani, and Ma Dong-Seok all convey their larger-than-life characters with effortless charm. And even the smaller performances from Lia McHugh, Lauren Ridloff, and Barry Keoghan are impactful, bringing the most heart into the film. When the characters stop telling us what occurred in the past and live in the moment with one another, Eternals feels like the best Marvel movie to date. The small exchanges between those characters have humor more in line with The Dark Knight than the bathos style we’ve come to expect from the MCU. It’s a kind of humor that lets you chuckle and smile, and sells the millennium-spanning relationships between these characters. And yet, the majority of Eternals is not these small moments.

Once the third act begins, Eternals jumps into lightspeed, trying to resolve each of the character arcs set up earlier in the film. But due to the ambitious size of this story, none of these arcs feel earned. Largely, it’s because this film seems to be missing a central character. Each character has their own mannerisms and beliefs, but none of them has a central arc that pulls us through the story. In the end, it leaves you feeling numb, as each character changes in their own way. But due to the little thematic overlap between these character changes, it lessens the impact of the story at the end. This lack of a uniform idea guiding Eternals is the film’s biggest weakness. While the action looks great, it all feels meaningless. Despite the diversity of the group’s beliefs, there is little conflict between each member on a philosophical level. The action feels big, looks gorgeous, is at times full of tension, but lacks any true meaning.

All this goes to say that Eternals is a movie at odds with itself. It’s clearly directed by a master, with great production design, fantastic performances, and impactful cinematography. And there seem to be a few story threads that Zhao really wants to play with: contentment, aid, and the need for companionship. There are fragments of these ideas found in the screenplay, but these ideas are told completely through the performances and cinematography. And on the other hand, there’s a screenplay that operates in either exposition or explicitly stating its theme to the audience. Where Zhao’s style seems to ignore the marvel formula as much as possible, the writing tries to remind the audience it’s a marvel movie. The jokes don’t land, and the references to previous entries feel tiring. From a directorial standpoint, the film is one of the best in the Marvel Cinematic Universe. But the screenplay brings this movie down and makes it one of the lesser MCU entries. As a whole, it’s somewhere in the middle; and I hope it’s not the last time Marvel allows a prestigious director to take a shot in the MCU and give a bold take on the formula, flaws and all.