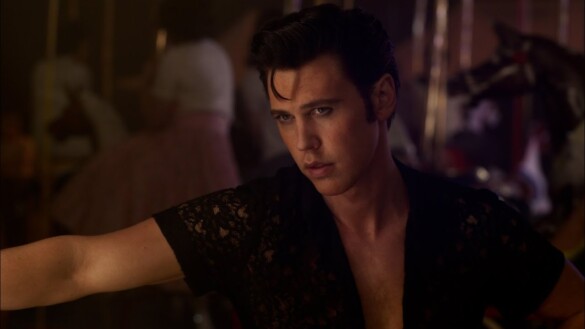 Synopsis: From his childhood in Tupelo, Mississippi to his rise to stardom starting in Memphis, Tennessee and his conquering of Las Vegas, Nevada, Elvis Presley becomes the first rock ‘n roll star and changes the world with his music.

If there is one thing that Baz Luhrmann doesn’t do, it’s the art of subtlety. He doesn’t need to. It’s not his style. His career is as lavish and vibrant as humanly possible; with huge costumes, big characters, and don’t forget a song or two (or 15). Elvis Presley’s character is shrouded in mythology, and it can be difficult to look past the “King of Rock and Roll’s” epic showmanship. The automatic choice for any director of this film is to be bold and brash, Luhrmann especially, doesn’t know any different. It’s his maximalist style, the man is an auteur for films that have the potential to cause sensory overload, but in Elvis – the biopic about the career of the man himself – the usual Luhrmann glamour and madness becomes tedious, chaotic, unfaithful, and completely unneeded.

The film seems very unsure about what it wants to be; a very straightforward story has been given the Luhrmann effect, and it fell at most of its glittery hurdles. This is a biopic, right? So why does it pull the wool over our eyes so much that it is, at times, unwatchable? It stems from some of the most bizarre editing I have seen in recent years; laden with rapid cuts, dizzying zooms, and an unnecessary number of flashbacks that become integrated into the scenes of the present – and that’s just the first half. Truthful biopic it is not, but an overworked action thriller? Possibly. To be in the mind of Luhrmann as he storyboarded this film would have been too much to handle.

This maddening approach to portraying the life of Elvis Presley is saved by a career-defining performance from Austin Butler, who not only nails the look, the famous swagger, and his thousand-yard stare completed with overbearing sex appeal, but his singing performance deserves merit too – even if he did only sing a third of the film’s songs. Every time the character steps onto that stage you can feel the buzz in the audience and among his peers, and the cinematography is key to this; it pauses time – even if it’s just for a second – the electricity begins to build, and with a handful of crotch shots and a focus on the almighty roar of sexually charged women, it explodes throughout the room. The rise from starry-eyed Memphis boy into a worldwide phenomenon seems unexpected, but Elvis was destined for stardom regardless. He could use a little help though (if you can call it that), and he gets it from his typically slimy music manager, Colonel Tom Parker (Tom Hanks), who assists Elvis to achieve legendary status quicker than a speeding bullet.

Contrasting to Butler’s enigmatic performance is an extremely questionable one from Hanks – how many times have we said that in his illustrious career? Each version of Parker is as bad as the other; the younger model (just about) with his ridiculous fat suit and fake nose, and a menagerie of dodgy accents – a hint of Irish maybe, possibly some German, who even knows. And then we have the narrating older version;  a poor man’s Goldmember missing both smoke and pancake – it doesn’t half take the sting out of the desired effect. Tom Hanks as the pantomime villain? Maybe that’s why it’s bizarre. Whatever it was, it felt majorly off-key.

The representation of this dysfunctional relationship between the two men is key though, as it certainly was in real life. There is clearly some truth in it; Parker was a bloodsucking, shady businessman, digging his claws into his naïve money maker, but there’s a tyrannical, maniac vibe being forced upon us by the two men involved in portraying the character – personal feelings should be left at the door maybe?

Elvis seems to be the work of an adopted Elvis fan; it champions the man as an almighty figure, someone who is a blueprint for the innocent little blue-eyed American boy, one who has the world at his feet but still goes home on a Sunday for his mother’s home cooking. Elvis was a great showman, maybe even the best, but one thing he was not, was an angel. Painting him as a saint among men seems oddly misguided, but labeling him as a civil rights activist (something the film seems hellbent on representing) because he grew up in a predominantly black neighborhood seems downright wrong – this version of Elvis is the ideal fabrication of a self-confessed fan, it completely disguises his traditional Republican views.

Even though Elvis does possess a few good qualities; Butler’s acting is fantastic, the musical numbers are electrifying, and the costumes are fabulously sparkling. The second half is undoubtedly stronger than the first but the film really is a mess. Elvis has no fixed style, so it throws a truckload of ideas at the wall and prays that a few will stick, but they all end up stepping on the other idea’s toes. Too much effort was used in trying to make it unique and completely dissociate itself from previous musical biopics, and the outcome feels like a Baz Luhrmann showcase with a “hey, look at what I can do” mentality.