Movie Review: Race doesn’t quite have enough to finish strong 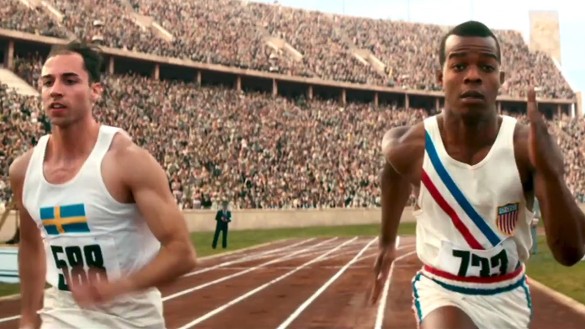 Synopsis: Jesse Owens’ quest to become the greatest track and field athlete in history thrusts him onto the world stage of the 1936 Olympics, where he faces off against Adolf Hitler’s vision of Aryan supremacy.

The story of Jesse Owens is one of heartbreak but also incredible inspiration. Rising above all expectations, Owens not only went to Nazi Germany in 1936 despite obstacles getting there, but he took advantage of every opportunity he had to represent something that is 100% uniquely to him. That is to say, this story is ripe with rich material just begging to be on the big screen.

Race opens with Owens (Stephan James) getting ready to head off to The Ohio State University, the first in his family to go to college. Soon after arriving on campus, he meets legendary coach Larry Snyder (Jason Sudeikis) who starts to prep Owens for the Olympic games. Along the way, Owens makes some mistakes, is forced to amend some relationships and runs into some hurdles (see what I did there) that may keep him from his dreams. Eventually the NCAAP tells Owens to stay away from the Games to boycott Adolf Hitler and his Aryan supremacy. This creates internal conflict in Owens, who understands this is a once in a lifetime opportunity as an athlete.

On paper, this should’ve been great. However, screenwriters Joe Shrapnel and Anna Waterhouse force so much into this narrative and contrive the utter loving —- out of it, that every character comes off thin and shallow. Even the Owens character himself never really feels human. The script bounces from Owens to USA Olympic politics to German politics and back so often that it undercuts any momentum it builds. The forceful writing of building Nazi Germany makes no sense within the context of this story. Instead of letting the audience bring in their already known knowledge of Nazi Germany, the screenplay feels like they have to show you that the Nazi’s are bad guys. As a side effect, time is taken away from Owens that would have otherwise built upon and developed him into a richer character. We never really get a sense of how Nazi Germany effected Owens, other than the superficial response we’d all expect. This feeling is a direct response of a messy narrative with the wrong focus.

When Owens is in the United States before the Games, there’s time spend on his journey leading up to the Games that is just as messy, just as contrived and just as frustrating. Even the athletic action sequences feel uninspired and add little excitement. Stephen Hopkins’ direction is fine and Race is more of a victim of it’s script but there’s not much in his direction that helps much. I’ll admit though, the shot of Owens as he walks into the Olympic stadium is awe-inducing and magnetic, a feeling that was rarely felt here, unfortunately.

That said, James and Sudeikis are pretty good and certainly have a chemistry that works here. While many of their scenes may not work narratively, their performances do bring a visceral quality that is appreciated. However, if you ask me, Andrew Moodie stole the show when he was on screen, playing Henry Owens, the father of Jesse. Moodie has only one line of dialouge but he says so much in this film with his expressions and how he acts with his eyes. He displays this love and pride toward Jesse that is moving and so effective on screen.

All in all, while the real-life story of Jesse Owens is spectacular and absolutely film worthy, Race doesn’t quite have enough working in it’s favor to finish on a strong note. It starts off the starting line fast, stumbles early on and isn’t ever able to recover.