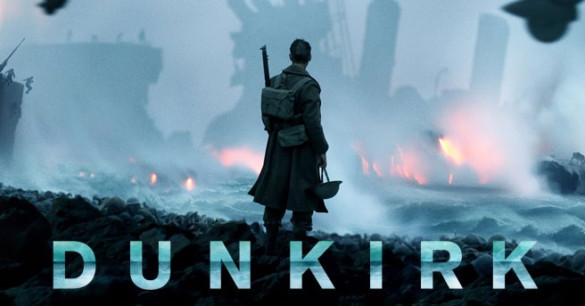 Synopsis: Allied soldiers from Belgium, the British Empire and France are surrounded by the German army and evacuated during a fierce battle in World War II.

War stories have an inherent weak link to them when told in these (mostly) peaceful times: All in the room will heed the gravity, horror, defeat and glory, but only the reciter can relate to the events that transpired. Mastery is required to lead those consuming the tale today into the hours no longer embraceable, to transport a soul of this moment to sites of conflict alive through memories and journals. Long has it been, 19 years to be exact, since filmdom accomplishes this feat with Saving Private Ryan; the wait for a comparable production withers in importance as time ticks on.

And then, Dunkirk arrives.

“We Surround You!” screamed the leaflets in the Nazis’ propaganda torrent drenching young soldier Tommy (newcomer Fionn Whitehead, graceful intensity) and his mates while pacing through the now-deserted town of Dunkirk. As with all films from Christopher Nolan, the peacefulness during the opening minutes are fleeting — deceiving, even — and momentarily some (literally) jolting shells from unknown directions are cutting down the squad. Before we realize it, our senses have been conditioned to wrap on-screen’s tumultuous 1940 as reality, futile in rejecting the pull of this hell of high water where hundred thousands are waiting to be delivered from a scenic kill box. “Bon voyage” is the film’s first line, an appropriate expression to send to Tommy and the other two leads who complete the script’s triptych structure: civilian skipper Mr. Dawson (Mark Rylance, everyman again) and fighter pilot Farrier (Tom Hardy, masked again but extremely audible).

Again, with Nolan being Nolan, the stories aren’t conventionally told; the unfolding of “the mole” (Tommy), “the sea” (Mr. Dawson) and “the air” (Farrier) weaves, plays catchup and continues in unpredictable beats. That might sound needlessly complicated in telling a fact-based narrative, but this is how Dunkirk finds its stride. Despite the difference in duration for each person, per the helpful titles, time overall becomes deadly no matter which way the clock looming the beach is ticking. Should this omnipresent timer expires, bombs from above will plow up sand or down ships; if it goes on, the Fuhrer’s ground troops creep closer, and the 22 miles between here and home drift further. The purposeful-yet-expertly controlled jumbling also connects the markedly different settings and distances of the stories, to better reflect the scope and respect the diverse backgrounds who lent their efforts. This is not a dream, but apparent is a paradox where the more (seemingly) sprawling the film becomes, the more intimate it turns out to be. Perhaps the most thus far in the auteur’s career.

In return, Dunkirk becomes the best entry point to Nolan’s filmography — no need to rearrange events from back to forward (or vice versa?), convince the self that the late Robin Williams is villainous, see comic-book people, drown in illusions, figure out dream levels or comprehend dimensions. Even within these elaborations, there is a relatable emotional core. Now without it, the filmmaker is serving desolation and hope in their rawest forms.

Helping with linking every fiber of the viewer to the frontline, too, are Dunkirk’s strivings toward silent-film grounds. Planes wail, ships creak and people cry out in pain regularly in these waters, which in a well-equipped theater should quake hearts as much as Hans Zimmer’s ticking-timer score. The sounds, musical or ambience, are sparse in design, as if to not drown out some crucial character notes. Feel the pressure Tommy is under when his compassionate nature doesn’t sit well with a hot-headed fellow private (Harry Styles, believably selfish here). Sense the tug-of-war between responsibility as a citizen and that of a father in Mr. Dawson as he sails his son (Tom Glynn-Carney) and his son’s friend (Barry Keoghan) straight into a war zone. Be the passenger in Farrier’s fuel-thirsty Spitfire, enemies close on his tail. Together with Hoyte van Hoytema’s outrageously immersive photography, the elements of Nolan’s war are capable of haunting the subconscious and deserves a showing in the best format possible, if possible, in times of fleeting serenity or prolonged chaos. There is just as much impact in that shot of the Shivering Soldier (Cillian Murphy) forlornly sitting on a floating fragment of a ship’s stern as those nail-biting dogfights that Farrier will find himself in.

Regarding weakness, Dunkirk has just one that it can’t help but share with other war films:  a Google search away from knowing the resolution. So be it — but don’t let that top search and highlighted YouTube video conclude your research into what is branded as a historical miracle, now also a marvel of both the genre and contemporary cinema.