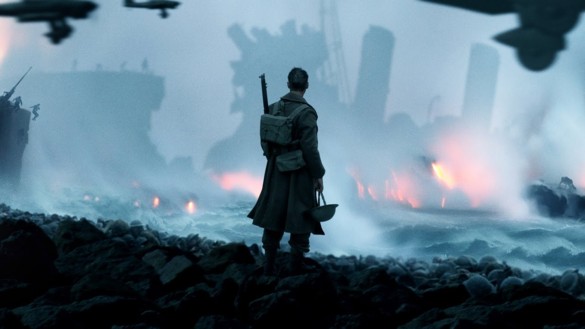 Way back in January when we did our initial Most Anticipated films of 2017, I had Dunkirk in my Top 10, but it was more in the back half of my list. However, if I had seen the trailers for Dunkirk prior to making that list, there is no doubt it would have been my #1. Christopher Nolan’s latest film has me excited on levels that few films have matched over the last few years.

Subjectively speaking, most of my excitement comes down to two aspects of what we’ll see in Dunkirk. For one, I’m a big WWII air war aficionado. All I wanted to be growing up was an Air Force pilot, and most of that came from my fascination of world history, the innovations of aerial combat in WWII and the immensely gripping heroism that American and British pilots displayed with their feats during the campaign. It truly inspired me on deep levels. Secondly, Tom Hardy is my favorite actor working today. From Locke to Warrior to Mad Max: Fury Road to an Oscar nomination in The Revenant, everything he does is magnificent. And for Dunkirk, Nolan went out and combined those two passions of mine into one experience!!!!!!! In the film Hardy plays Farrier, an RAF pilot, who I’m guessing will fly either the Supermarine Spitfire or the Hawker Hurricane, the two most prominent British fighters of the time. Either way, the images of Hardy in the cockpit of one of those fighters gives me goosebumps.

On top of that, WWII dogfighting in cinema has been very hit or miss in terms of quality. Great films like Twelve O’Clock High, Midway, Tora! Tora! Tora! and Memphis Belle feature some excellent dogfighting sequences for their time. However, modern cinema and the technology of today has the ability to enhance dogfighting sequences by expanding outside the cockpit and showcasing the beautiful ballet that WWII pilots would have emulated, but we haven’t seen much of that sadly. Michael Bay’s Pearl Harbor and the Japanese film The Eternal Zero are two of the best examples of exhilarating dogfighting sequences, but there’s not much else outside of that from a WWII film standpoint. Red Tails, as much as I adore that real-life story and those great heroes, featured some disappointing action sequences (for me) and the film overall I sadly found frustrating. All of that said, again in addition to Hardy and my WWII expertise, it looks like Dunkirk will finally rival Bay/modern cinema as the best film to feature WWII dogfighting. From the few shots we see in the trailer, it looks incredible. I’m not sure how much of it we’ll see in the film from an action standpoint – as I’m anticipating introspection and character to be a main focal point here – but I’m still through-the-roof excited for the few sequences that we will get in the film.

Another reason to be excited for Dunkirk is that it explores a critical event in world history that many people may not be familiar with overall. Dunkirk was a major turning point in the war, and if had gone another way, we would all be living in a different world today. The argument can be made that Dunkirk, along with D-Day and the Battle of Britain, are the three most vital moments of the war. So to see this event on screen is exciting from a historical learning standpoint, especially in the hands of a great filmmaker like Nolan.

Lastly, I’m also looking forward to Dunkirk because it will be scored by Hans Zimmer, who arguably does his best work when collaborating with Nolan. While I didn’t love Interstellar, Zimmer’s score for that is emotional and exhilarating. Equally his work on the Dark Knight films are instantly memorable and arguably some of the best from that genre. And don’t get me started on Zimmer’s work for Inception, perhaps my favorite score from him to date.

What about you though? Are you excited for Dunkirk like I am? Let us know.