Movie Review (NYFF): ‘Dune’ is a lifeless spectacle that serves as a prologue for something bigger and better to come 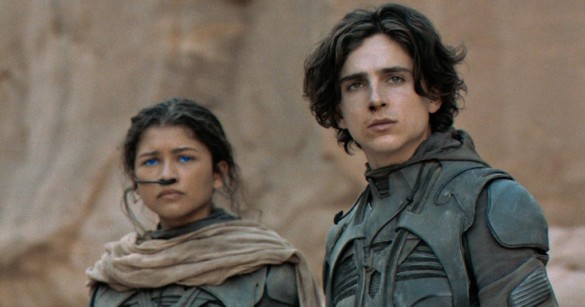 Synopsys: Feature adaptation of Frank Herbert’s science fiction novel, about the son of a noble family entrusted with the protection of the most valuable asset and most vital element in the galaxy.

Denis Villeneuve is a visionary director unlike any other working today, whether it is a tale about questioning your life after a traumatic abortion like in Maelström (2000) or the pulsing chain-of-events caused by a government task force to stop a Mexican drug cartel in Sicario (2015). Although most recent works dwell in the sci-fi genre, all his pieces deal with the search for identity and center on a character who feels lost in his environment. For his next project, Villeneuve wants to tackle Dune, the Frank Herbert odyssey that many describe as “unfilmable.”

Paul Atreides (Timothée Chalamet) is a gifted young man destined for many great things beyond his understanding. He must travel to one of the most dangerous planets in the universe, Arrakis (also known as Dune), to secure the future of the Atreides heir, Lady Jessica (Rebecca Ferguson) and Duke Leto Atreides (Oscar Isaac), and his people. However, the Atreides aren’t the only ones trying to conquer the planet. The malicious Baron Vladimir Harkonnen (Stellan Skarsgård) wants a war for the planet’s supply of one of the most valuable resources in existence: melange, better known as “spice.

Herbert’s novel has influenced many auteurs to create their visions or franchises, notably George Lucas with Star Wars. A long time has passed since Dune got published, and there have been multiple stories like this: a young hero is destined to save the world with his unique abilities. That storyline of the “chosen one” or “the messiah” has been refurbished many times; some films go in a more original route, while others just stick to the regular formula and fail. In this case, you feel Villeneuve’s passion for the source material; nevertheless, his vision arrives lifeless and lackluster. His adaptation is divided into two separate parts, and it is evident that this is indeed a segment of the narrative because it feels incomplete in structure.

It’s not the literature as a whole but the core of Villeneuve’s vision. It feels like an extended prologue before going over to part two if it even happens. It is the opening crawl from Star Wars, a prelude to what may be considered “the good stuff.” One of the reasons Alejandro Jodorowsky never got to make his version, and David Lynch’s ended up like that is because of the material. It is too large in scope and oeuvre that it would take over three pictures with a 3-hour runtime or a 9-hour romp to cover it with fulfillment. And for a person who hasn’t read the book, like me, you won’t understand much of what’s going on. Its narrative is concocted by stone-wall scripture that is impenetrable to get through if you aren’t familiar with it.

There is also an issue regarding the characters and their development in this grandiose tale. Since the writers skimmed over some of their arcs and went with a drier route, you don’t have any emotional devotion to them whatsoever. You don’t empathize with any nor get reasons to care for them if they get into sticky situations. Not even the resplendent all-star cast could elevate their galactic trooper personas. Some deliver a good performance, most notably Rebecca Ferguson as the elegant Lady Jessica and Jason Momoa as the wild uncle Duncan Idaho. I wish I had seen more from Stellan Skarsgård as Baron Vladimir Harkonnen. All caked-up in make-up with black oil covering his body, playing his villain with a pantomime and egregious demeanor like Ian McDiarmid as Palpatine.

On a more positive note, there are some impressive technical aspects in this film that are amusing to the eye. The tactility of the atmosphere is strong, making you feel the sands of Arrakis brushing through the cinema. Unlike other sci-fi displays, you don’t question the artificiality of this fantasy world. The costumes and production design are lavish, and the cinematography, although it lacks a bit of color, is nice to look at. However, when it comes to the visual effects, I feel somewhat mixed about them. Not that it seems shoddy or creaky, but at times, you can sense the green-screen mechanics in the background, taking you out of the experience for a quick second.

As the clock ticks to the grand finale, an unnecessary cascade of explosions and slaughter meshes into the story. You just wish it would amount to something great in the end; a piece of cinema that truly captures what the sci-fi and fantasy genres can bring to the table when executed astonishingly, for example, Lord of the Rings: Return of the King (2003) or Star Wars: The Last Jedi (2017). Villeneuve can build spectacle and innovative tales because we have seen him do it before, but his rendition of Dune isn’t one of them. Finally, the spice opera ends, and the only question in your mind is if that was really it. I guess we’ll just have to wait to piece the puzzle together because these 155-minutes served as a curtain-raiser. And remember: “this is only the beginning.”