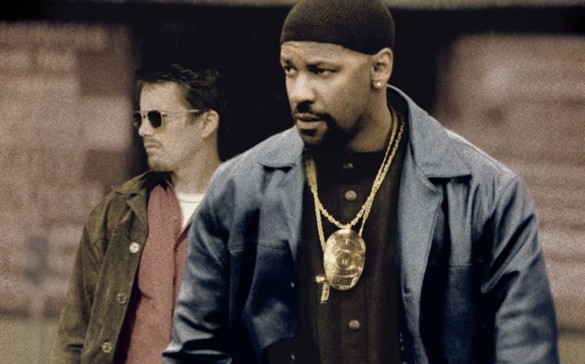 Synopsis: Detective Alonzo, a senior narcotics officer, must train Jake Hoyt during the course of a day. However, Hoyt learns that Alonzo’s methods are not ethical and he soon realizes that he is being trapped.

A surprising success all those years ago, Washington is electrifying, Hawke is brilliant also. Let’s look back at what makes this film great.

“King Kong ain’t got s**t on me”, this man’s ego is almost as big as his dept, but what a memorably vicious and corrupt character Alonzo Harris truly was – like a wicked villain from a Shakespeare play. Training Day is a landmark cop drama, it produced something different and was effective in showing the effectiveness of both sides of the law – corrupt cop films of old like Bad Lieutenant started to look tame in comparison – Harris is the epitome of greed and selfishness. Washington is intoxicating and well deserving of his Oscar win that year (in an absolutely stacked year as well may I add), forget Glory, Man on Fire, American Gangster (although he is brilliant in them all), Training Day is the film he has the most fun with, this is a performance of grand proportion and a joy to experience.

From minute one this film becomes more intense and only gets darker and more thrilling, to think this is all happened in one day is incredible – almost unbelievable – but exciting, nonetheless. Directed by Antoine Fuqua – an inconsistent director for the most part – who loves a cop drama, but this is easily his best film in a largely underwhelming filmography. David Ayer (writer of the script) works well with Fuqua to deliver this exhilarating showpiece – this was an established member of my top 10 films for a long time may I just say.

The little-known fact about Training Day is that it was kind of based off the Rampart Scandal in the late 1990s, although corruption in L.A.’s C.R.A.S.H unit was yet to be exposed, the mutterings of such unlawful acts were what aided to the resolution of the film. Washington even grew a beard (method or what) to replicate his look on one Rafael Pérez, a narcotics officer who was caught up in a variety of scandals over the years.

The film shows you both sides of the law, the corruption that is rife throughout law enforcement in L.A., and how these keepers of peace integrate themselves with figures from those mean streets for greed and power, contrasting to the honest side that try and combat against it all. Detective Alonzo Harris, a senior narcotics agent and living legend must train Jake Hoyt (portrayed brilliantly by Ethan Hawke) during the length of a day. Hoyt soon learns that Alonzo operates within his own methods, which blurs what is ethical or not. Alonzo is corrupt as they come, introducing Hoyte to a whole host of criminals and questionable neighborhoods, he is an urban legend around the streets, the bogeyman of sorts. Hoyte is the perfect foil to combat against his teacher for the day – the naïve and scared rookie cop desperate to make a name for himself, but will he cross that line, even when tempted?

Alonzo thinks of himself as a prophet, a figure from the mystic realm, handing out life lessons to his rookie partner, his akimbo guns represent swords of justice, and he is God almighty. The interrogation scenes are fierce, we experience both faces of those swords, the effectiveness of Alonzo’s methods to get what he wants, and like he says, “To protect the sheep you gotta catch the wolf, and it takes a wolf to catch a wolf”, trying to justify his crooked techniques as best he can it seems. On top of that, and the constant struggle between was it good and evil, we witness a great kinetic energy between the two characters, it is gripping, you cannot take your eyes off it. The blossoming friendship, the corruption, the “policework”, it all leads to a climactic showdown between the two men, a fight for justice, who will win?

Training Day is such a compelling and exciting crime thriller, it just grips you straight away during the first meeting of the characters, and when we do first meet Alonzo, there is a sense of his character straight away, full of dynamite and ready to explode. This film is a great character study; they both have harsh moral dilemmas to deal with, the way they resolve them shows us a lot about their individuality and mindset. The two are constantly pitting their wits against one another, with one expertly manipulating the other, Mauro Fiore’s cinematography highlights this with his framing and camera work, aiding to the pace of the film and often separating the two men as well – they are on opposite sides of the moral compass.

This brings me to the one minor downfall of the film, and it surrounds those final 20 minutes which just seemed to be rushed, they spent so long laying the foundations and establishing story and character, that they then finished rather abruptly, the plausibility and the dimensions became askew leaving us with a thought of how and why. However, 85% of the film is brilliant in my eyes, which allows such an ending to be acceptable – I’ll let you get away with it this time. Let us all remember as well, “This s**t is chess it ain’t checkers” a quote I have used once or twice in my life.