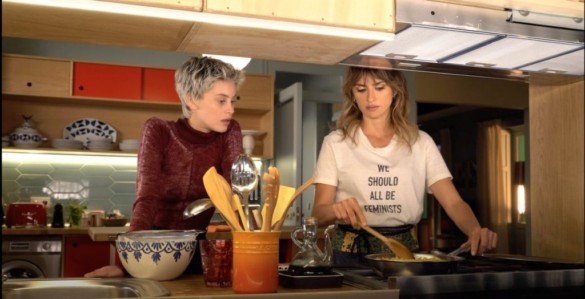 Synopsys: Two single women meet in a hospital room where they are both going to give birth. One is middle-aged and doesn’t regret it, while the other is adolescent and scared. The two women form a strong bond with one another as they both confront motherhood.

Janis (Penélope Cruz) is an editorial photographer approaching her 40s who befriends a forensic anthropologist, Arturo (Israel Elejalde), after a photoshoot. Janis asks Arturo a special request: help her exhume the bodies of some men, including her grandfather, lost after the Spanish Civil War (1936-1939) at the rural town she grew up in. Arturo shares her political beliefs and decides to help her. Between the two the relationship evolves into something more passional, a love that cannot happen in its full form. After all, Arturo is married and his wife has cancer. But something happens: Janis becomes pregnant. She understands Arturo’s position and tells him she wants to keep the baby without compromising him to be the father. She’ll be a single mother like her mom and grandmother, and Janis ends their relationship for good.

Months later, at the hospital, Janis meets Ana (Milena Smit), a teenage girl who is in labor at the same time. Ana is nervous, her pregnancy was an “accident” too, but not one she’s happy or excited about. Besides the obvious dread, she can experience while having a baby at her young age, we deduce there’s something more. Janis tries to calm her and while they wait for their babies’ arrival, a bond between the two single mothers —despite the age gap— is created. After they leave the hospital, the two women keep in touch and share their experiences as first-time mothers.

Arturo takes the courage to call Janis and tells her he’s in Madrid and he wants to meet the baby. Janis agrees and invites him to her place. When Arturo meets the baby, he remarks how “dark-skinned” the baby is and asks Janis about her family ethnicity —she tells him she didn’t meet her father but he was supposedly a dark skin Venezuelan with slanted eyes—; and all of a sudden, he says he has to go but tells Janis he is staying at the same hotel as always if she wants to talk with him. Janis knows something bothered him and looks for him the day after. Arturo confesses to her that he didn’t feel like the baby was his child when he met her, so he wants to take a paternity test. Janis gets mad, he was the only man she was with at the time she got pregnant.  Back at home, she still feels uneasy after her fight with Arturo and decides to find the answer that can change her life.

If you’re familiar with Pedro Almodóvar’s work, you are warned that everything will be deeper than what it looks like on the surface, and there can be lots of things happening at the same time. Parallel Mothers (original title: Madres Paralelas) is not the exception. His most recent film starts off as a family drama of two single mothers going against the odds, but as it moves forward it turns into a thriller, then returns to the family drama again, and it also has a political plot going around. And of course, his characteristic red is everywhere and brighter than ever.

Almodóvar is also known for his takes on motherhood. This is not the first time Penélope Cruz takes the role of mother in one of his films, she even played a version of his own mother in Pain and Glory (2019, Dolor y Gloria), but in Parallel Mothers is where she gives the best performance yet in their collaborations. Some people are even calling this the performance of her life and I can’t disagree with them. She takes Janis’ role with so much respect and understanding, it seems like it was made for her only. Not nominating her performance in the next awards season should be taken as an offense. Milena Smit is a rising star, her chemistry with Cruz is undeniable; she balances the naivety a young girl might have with the toughness of someone who has been through a lot.

I was surprised at how fast the time passes in this 120-minute-long film. The first and second acts are the master class you would expect from someone like Almodóvar, but the third act feels a little bit lose. It sets aside the main plot for a side story we left at the beginning. In other situations, this wouldn’t be such a problem if the resolution of the main plot didn’t feel pressured and with a couple of questions still waiting to be answered.

Overall I enjoyed the movie. I wouldn’t call Parallel Mothers Almodovar’s best work to this date, but it’s fantastic and an exciting ride of finding the motivation to move on without letting the historical memory —or an individual’s past— die, as they can make us understand our present. It’s more of a personal journey than a story about motherhood, which is one of the biggest twists this movie has. Parallel Mothers doesn’t disappoint, it deserves to be one of the most anticipated films of 2021 and the wait will be totally worth it.