Movie Review: The problems of ‘Downsizing’ are many and aren’t small 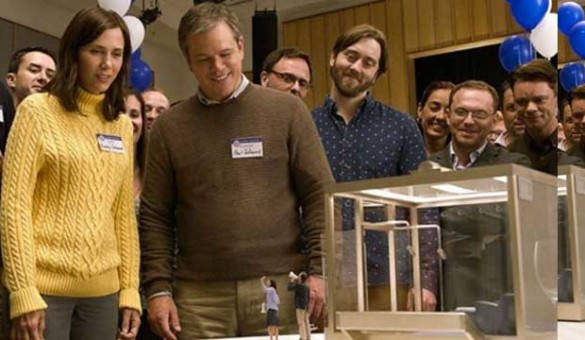 Synopsis: A social satire in which a man realizes he would have a better life if he were to shrink himself to five inches tall, allowing him to live in wealth and splendor.

In about now or the next hour, two Norwegian researchers (Rolf Lassgård and Søren Pilmark) will perfect the procedure to Lilliputianize us and, through that, stop the doomsday clock from truly reaching midnight. As expected, “downsizing” grows popular and vaults to the top of everyone’s to-do list: the science community, TV watchers, radio listeners, and a Matt Damon dressing up in Omaha Steaks polo shirt.

So far so good; still synapses-igniting and discussion-worthy. Had craft been chosen over concept, Downsizing would have remained so and avoided a spectacular self-immolation.

There is a plot; it’s just told in a drunken fashion. There are messages; they are just communicated in a way that guarantees zero absorption. So enamored with its premise that the film’s “similar titles” section will be corporate presentations – all flash and prohibited from revealing inner workings. Consequently, Alexander Payne’s latest is as non-Alexander Payne as can be; far from an intended “large-canvas science-fiction social satire” and more of an occasion for well-known faces to wander in sleek places production designer Stefania Cella dreamt up and, at times, indulge themselves in some genius scale duperies from d.o.p. Phedon Papamichael’s camerawork.

Back to Damon. Yes, he is credited as “Paul Safranek,” a fact we’re reminded quite regularly since everyone can only get half of his full name right, but it’s a struggle to see the character when the star delivers the lines, emotions and developments with diminishing conviction. It’s The Great Wall all over again, minus the white savior part. Christoph Waltz shadows Damon, too; his Serbian playboy guise completely retreats into the actor by the film’s end. So is Udo Kier. Same with Jason Sudeikis, gallantly turning up his cocksurety to maximum only to be in three scenes. What exactly is going on here? Is there a competition to see who is the most unconvincing actor? No, but all signs point toward people realizing they are part of a show that is designed to undercut them, and now disillusionment is setting in.

Only one person rises above. Well, it could have been two – note how an acutely dramatic Kristen Wiig is introduced and then tossed aside. If there is one thing Payne can be proud of out of Downsizing, it’s that he has given Hong Chau a chance to bat in this awards season. The actress, whom industry’s standards would classify as an unknown, trounces all her co-stars at every given turn as the broken-accented and magnanimous maid-slash-dissident Ngoc Lan Tran. Chau is also sensitive enough to overpower through the screenplay’s bewildering efforts to be as non-compelling as possible (ready for yet another verbal exposition after a visual one, or one more sermon about society’s ills?). In fact, her performance is so remarkable that Ngoc Lan’s presence is perpetually gargantuan. After The Last Jedi, Vietnamese-American performers earn another on-screen victory in 2017; it’s a shame that this film’s lame returns might not give Chau the edge that Kelly Marie Tran will – theoretically – have.

But no way can Chau alone saves the day. For a film that has priorities as one of its delivered-via-bludgeoning themes, Downsizing ironically opts for the poorer choice, exploring its universe on its own and through that selfishness renders almost all other aspects incompetent. Safe to say the next hour post-screening will be full of frustration and confusion at how such a funky idea and the talent involved did everything except expanding our minds.

Hear our podcast review on Episode 253: