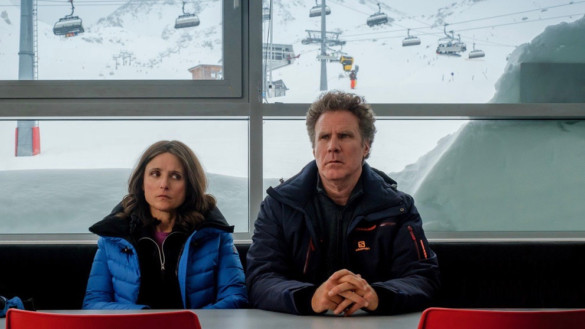 Synopsis: Barely escaping an avalanche during a family ski vacation in the Alps, a married couple is thrown into disarray as they are forced to reevaluate their lives and how they feel about each other.

If you spend any amount of time discussing movies online, you know that there is always a “discourse.” This nonstop talking, even before a movie opens, is almost always negative, and always annoying. And sadly, this is not limited to the big event movies and the Oscar season. No one, and nothing, is safe. You might think that a smaller film, like Downhill, would miss this ugliness. And, to be fair, if you blinked, you might miss it. But almost anytime there is an American remake of an international film, the rabble start to cause trouble. So, according to public perception, as this is a remake of Swedish film Force Majeure, the knives are out. As much as I would love to fight back against this, it would be better if the knives had been buried in Downhill to the hilt, preferably before the movie was even produced.

The basics of the plot are that married couple Pete (Will Ferrell) and Billie (Julia Louis-Dreyfus) go on a ski vacation with their kids. While eating outdoors, there is a near avalanche in which everyone in the family believes they are in mortal danger. Instead of staying with his family, Pete makes a run for it, which is witnessed by Billie.  Relationship drama ensues. Unfortunately, it is hard to imagine a world in which anyone cares about this marriage. The writers attempt to make Ferrell likable (a nearly impossible task) by shoehorning a bit about his father dying 8 months previous. They even go as far as to have him wear his father’s ski hat underneath his helmet for much of the runtime. And honestly, Ferrell is a terrible choice in this role, if for no other reason than he is the exact kind of guy you would expect to run when his family is in danger. This is the kind of buffoonery Ferrell has worked to cultivate throughout his career.

A movie like this, which is making the attempt to walk the fine line of relationship drama and comedy, is a difficult proposition at best. Any comedy that works (and very mildly) is thanks to a borderline insane caricatured performance from Miranda Otto as an oversexed employee at the ski resort. Moments of comedy from established comedians Louis-Dreyfus and Ferrell fall shockingly flat. Here is the most damning reaction I can imagine. The biggest laugh occurs when Ferrell is watching television and a well known star of the past is on the screen not speaking English.

The movie is not a total loss, and this is only because Julia Louis-Dreyfus gets one fantastic scene. It is essentially a monologue dressing down her husband in front of company (Zoe Choe and Zack Woods). It is such a pained and brutal performance from her, that it is near impossible to be affected, at least a tiny bit. But herein lies the problem. It is truly a monologue. A speech seemingly unconnected to the rest of the film. It stands out in the absolute worst way. And because it is so well performed, it undercuts the rest of the movie. At some level, it should pain the audience that this previously happy relationship is splintering. And yet, Ferrell is so obviously not worth her time that I found myself hoping she would take the kids (Julian Gray and Ammon Jacob Ford), divorce him, and clean him out in the settlement. Remember, this is not a man who was insensitive, it is a man who left his family for dead.

If you are going to tell a story like this, you have to either make us care about them in the lead up to that moment (absolutely not) or have a slow resolution in which you can see why she would find it in her heart to make an effort with this man. And that reveals another problem, and a common one at that. Any time you have a relationship drama where one partner is obviously at fault and the other is faultless, you have written yourself into a corner. Although the writers (Jesse Armstrong, Nat Faxon, and Jim Rash) have worked on award-winning scripts, this one was doomed from the start. Downhill does the horrible work of proving the internet right. We would all be much better off if the remake never happened and, as always, Julia Louis-Dreyfus deserves so much better.