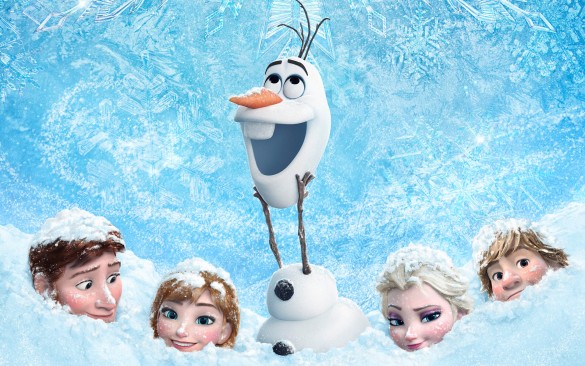 Synopsis: Fearless optimist Anna teams up with Kristoff in an epic journey, encountering Everest-like conditions, and a hilarious snowman named Olaf in a race to find Anna’s sister Elsa, whose icy powers have trapped the kingdom in eternal winter.

DIRECTION
While many people think Pixar is on the down swing a little bit, Disney seems to be more on the upswing lately. Walt Disney Studios were screwed out of the Oscar last year with Wreck-it Ralph as it was easily the best animated film of 2012. This year, Frozen is a solid (no pun intended) companion and is arguably the best animated film this year as well. The aesthetic Chris Buck and Jennifer Lee create is gorgeous and brings you back to the Disney musical days and shows how Disney may still be the king of animated films. The musical choices are great and the visuals they create to go along with it are absolutely stunning. It has all the sillyness and fun you’d expect from a film like this and it’s hard to not like it.

SCRIPT
The story Disney creates for Frozen is great and it even takes a stride away from the Hollywood formula a little bit which was a nice touch. The story centers around two young girls, Anna and Elsa, who are very close siblings as little girls. Elsa has magical powers where she can create snow and ice anytime she wants. She also struggles with her powers and has a hard time controlling them which brings the hard decision to hide her powers from Anna after a tragedy almost kills her. Anna, struggling with why her sister seemingly shut her out of her life, is dealing with loneliness and isolation which drives her need for wanting to be loved beyond normalcy. It’s at this point in the story, you think the formula is working as usual when things go awry and other characters come into play. The dynamics between all of these characters are really funny and it creates a world that both kids and parents will enjoy. Ultimately, the best part of the script is that love will win the day but it doesn’t have to be the same love you’d expect to see over and over again.

MOVIE REVIEW: Oldboy just doesn’t quite cut it compared to the original.

PERFORMANCES
Kristen Bell gets the lead here as Anna and she does a pretty good job. Bell has tendencies to be annoying and childish in some of her performances but here it tends to be to her advantage given the target audience for this film. Her dynamics with Jonathan Groff and Josh Gad were absolutely incredible and that made Bell’s performance come alive. Speaking of, both Groff and Gad were terrific. Both characters were written well and they were absolutely hilarious and charming at the same time. Both have musical numbers, although Gad’s was more prominent and pretty hysterical given the context of his character. And you gotta love Idina Menzel, whose voice is that of an angel. She’s best known for her singing roles in films and on the stage, especially for her role in Wicked. Menzel is amazing and has perhaps the best musical number here in the song Let it Go, which was gorgeously shot as her character was singing. Alan Tudyk has a very small role here but he’s really great and I love anything he does.

SCORE
This is a Disney musical so the music is going to be a huge part of this film, obviously. While, the musical numbers are great, it isn’t the best Walt Disney Studios has done as an overall package. The beginning song Frozen Heart which is sung by the cast is really good and sets the tone of the film extremely well. And as I mentioned, Let it Go by Menzel is arguably the best song and the visuals behind it are perhaps the best of the year as well. The rest of the numbers can be hit or miss depending on the person. Bell’s songs didn’t grab as much and some of the lyrics were very silly but they were performed well and added good character development. Overall, the music was still really good and the songs will be mostly enjoyable in the film. The score by Christophe Beck, again, wasn’t the best Disney’s had, but this is still a very strong score and one that adds a good touch to the film.

FINAL THOUGHTS
Disney musicals are really fun and it’s great to see Walt Disney Studios bringing their “A” game once again and for two years in a row, should have the Oscar for Best Animated Film. This is a film that most people, kids and adults, will enjoy for everything it has going for it. It’s really fun and the ending sequence isn’t quite what you think it would be, which was a strong direction choice.

THIS IS AWESOME: The Mickey Mouse short they play before the film starts is absolutely amazing! It starts out in the old school format of cartoons and halfway through, it shifts to the 2013 digital format of animation and the back and fort of that is incredible. If you can, go see it in 3D too, you won’t regret it. Easily, easily one of the best shorts this year.