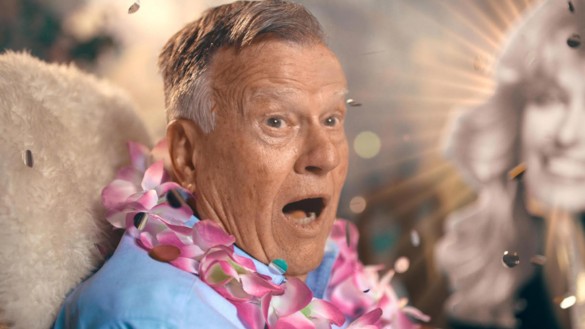 Synopsis: As her father nears the end of his life, filmmaker Kirsten Johnson stages his death in inventive and comical ways to help them both face the inevitable.

Kirsten Johnson is a long-time cinematographer who’s known for her work Citizenfour, The Invisible War, and 1971 among others, but she really stepped onto the scene in 2016 with her documentary Cameraperson. It didn’t win Oscars (of course the Documentary Branch didn’t even nominate it), but it was hailed as one of the best films of that year, let alone being one of the very best docs to come out in 2016. Well, four years later and Johnson is back with her latest film in Dick Johnson Is Dead.

Johnson’s latest feature examines her father, Dick Johnson, who begins to suffer from dementia and to cope the both of them create a series of staged sequenced that elegantly portrays the end of Mr. Johnson’s life. There are accidents. Falls. Car crashes. Construction workers with deadly shrapnel. A patient of his that turns on him in the office and stabs him. At one point, Dick even finds himself in a heaven-like state with confetti and party decor all around him as he celebrates the transition from life to death. The intuitiveness of Dick Johnson Is Dead as it mocks up these varying scenarios is not only engaging but oddly funny in its self-awareness that Dick’s death is approaching.

However, it’s not all roses and awkward laughter regarding that irony. While inventive and bitingly clever, at its core, Dick Johnson Is Dead is strikingly poignant as Kirsten lovingly witnesses her father’s deterioration. Things may seem normal at first, but it’s not before long where we see the humanity of these individuals pour out of them. In one sequence, Dick realizes that he can no longer work. He has to sell his beloved car and move to New York to live with Kirsten. We see him lock the door to his office for the last time. He has the epiphany that he can’t keep his car. When those things finally hit him, it’s devastating. There are moments Dick has at his home that remind him of his late wife, who tragically died some years before because of Alzheimer’s, adding further pathos to the film.

What makes Dick Johnson Is Dead even more nuanced in all of that, though, is the sleight of hand it takes near the end where grief and celebration collide. It’s not easy to grapple with your own mortality, but it’s even more challenging when it’s your father and it’s happening right in front of your eyes every day. The emotional weight of that could be cumbersome, but Kirsten also realizes that her father isn’t defined by this one moment either. In what is arguably the best scene of the year, without spoilers, the final sequence involves a massive collision of death and life, fiction and non-fiction, and it’s utterly breathtaking. It’s the thesis of film and the irony that comes with it, coming to terms with the reality that death is inevitable. And it’s sad. It’s painful. But it also reminds us of what’s great in life and why family means so much to us.

You couple that with Kirsten Johnson’s direction and vision for the film, and it renders Dick Johnson Is Dead one of the best films of 2020. It’s available on Netflix and I cannot recommend it enough.