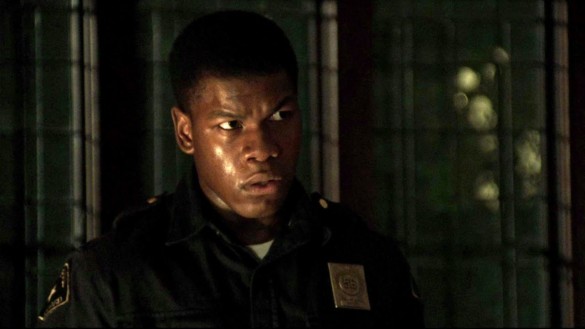 Synopsis: Amidst the chaos of the Detroit Rebellion, with the city under curfew and as the Michigan National Guard patrolled the streets, three young African American men were murdered at the Algiers Motel.

Detroit is a bleak, difficult film that finds its messaging a bit scrambled. From its docu-drama visual style, to its troubling torture scenes, Detroit attempts to fall under the historical epic category but instead finds itself in the “poorly made and disrespectful” category. The film does no justice for the historical events it is based off of, in fact it actually treats the events with little to no emotion. To some, Detroit may be an important film but since it is overflowing with violence, disrespect and false emotion that importance will be lost among many viewers.

Detroit begins with the riots that occurred in mo-town during the 1960’s. Jumping back and fourth between when the riots began and a rather specific event within the timeline of said riots. After highlighting the start of the events the film jumps into the incident at the Algiers Motel, where a group of police officers harass a group of African Amercian teenagers. The film has no real message whatsoever, there is no real beginning middle and end, it is one of the messiest films within recent memory.

Not only is there little to no story but the film just shows blatant disrespect toward the actual events. The movie is lit incredibly dark and sickly, the camera shots are shaky and uncoordinated and the film is edited almost like a horror movie. Instead of trying to prove a point like most historical films, Detroit just glorifies one horrible event after another. Instead of treating these terrible moments of torture and violence with grace and respect, the movie glorifies them. The one thing that this movie forgets to do is show us that the violence is wrong. Obviously, we’re humans we understand that the events that occur in the movie are immoral. But in film when exposed to moments of darkness and horror there should be some sort of saving grace. Detroit completely shies away from this. Instead of attempting to cheer up its audience it brings them even lower the longer the film drags on.

It gets to a point where the film almost has no redeemable qualities. The performances are nuanced and bring a certain energy to the film but this only occurs in rare spots during the film. The film is even crafted in an almost amateur matter which is shocking considering Kathryn Bigelow is in the directors chair. Bigelow has crafted some of the most exciting political films in recent memory and her visual style is typically focused and subtle. However in Detroit she strays from this and makes something much more amateur. It is almost disappointing to see something so flawed from such a talented director.

Detroit is an ill managed, chaotic film that cannot seem to make up its mind. Instead of focusing on a specific subject to discuss the film jumps around and around. Proving to be more disrespectful than an actual love letter to the historical events it is based off of, the film lacks in almost every aspect. There some small moments where the performances are done well but those moments are few and far between. The filmmaking craft is lackluster and Kathryn Bigelow has no made her first down right bad film. Detroit gives the illusion of importance but actually proves to be more frightening and disrespectful.

Hear our podcast review on Episode 233: