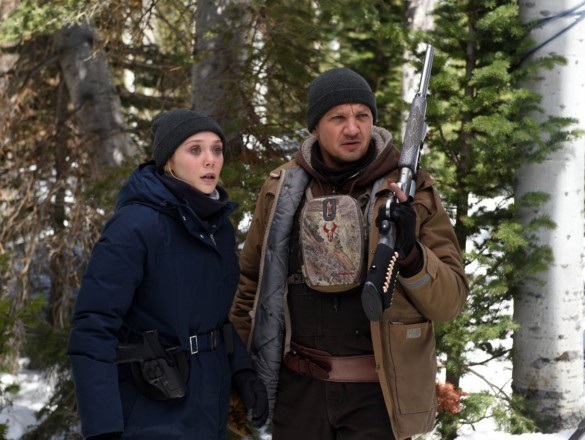 Synopsis: An FBI agent teams with a town’s veteran game tracker to investigate a murder that occurred on a Native American reservation.

The contrast in the opening moments conjures a marrow-deep chill: Twenty-something Natalie (Kelsey Asbille), exhausted and bloodied, running barefoot through moonlit snow while a voice gently recites some sunny poetry. Or lines of a eulogy. She eventually succumbs to the cold, frozen by the tree line with little semblance of serenity. Judging from how often and how many ways the austerity (this version) of Lander, Wyoming is shown, Natalie’s death is rendered as the definition of “a statistic,” a “c’est la vie” thing around these parts.

Casualties of the drug war in Sicario, the working class in Hell or High Water and now Native Americans – writer Taylor Sheridan’s third entry in the thematically connected American Frontier series again focuses on a (arguably purposefully) sidelined demographic, translating its plight into a two-parts engrossing narrative and one-part biting commentary. In terms of timeliness, Wind River overtakes Sicario and Water, what with trending items of late being the ongoing tussle concerning the Dakota Access pipeline and this tone-deaf tweet “helping” to preserve the country’s storied mistreatment of tribespeople.

While the reservation – whose name is also the film’s title – is the central setting, there is more reason to call it “prison” as the whodunit goes on. Everyone walking around Lander, not just those on that designated patch of land, has seen the elements deprive them of warmth, prospects and connection. Stern game tracker Cory Lambert (Jeremy Renner), after a “coyote repelling” session, goes home to news that his ex-wife Wilma (Julia Jones) will leave for good, toward a new job and scenery that won’t revive their late daughter. Novice FBI agent Jane Bremmer (Elizabeth Olsen) is the only form of support dispatched to the town’s local police; her experience and bewilderingly ill-suited clothing for the climate reflect how much the powers-that-be care for the natives. The demeanor of Natalie’s parents, particularly her father Martin (Gil Birmingham), suggests they have accepted the idea that they are prey to the land’s cruelty, but to see the daughter “chosen” as its first meal – can anyone prepare for it? In a gut-wrenching sequence, Jane, following the rulebook, ignores Martin’s line that his wife is still unfit for questioning, entering her bedroom and becoming stunned at the sight of a grief-stricken mother repeatedly slicing her wrist.

After this is a heart-to-heart, father-to-father discussion about “taking the pain,” now that Martin is living with the kind of sorrow that has haunted Cory for the past three years. Despite the lines’ leanness and the performers’ on-point delivery, this one of a couple moments of “on-the-nose”-ism highlights the weaker aspect in Wind River‘s screenplay, an issue that is also proof of a little-altered creative vision. Since Sheridan is also in the director’s chair here – just not for the first time as said by most publications, publicity and Sheridan himself (look up a 2011 horror called Vile) – what is on the page may get to leap on-screen unscathed. Still, the core mystery would have received extra potency had the film channeled Sicario’s economical beauty wherein things observable – acting, movement, framing and pacing – are prioritized over dialogue and its tendency to spoon-feed information.

Renner’s finest performance to date, Olsen’s ever-present vivacity and the surprisingly sharp humor (conveyed with mastery by Graham Greene as the reservation’s sheriff) — the dialogue-heavy nature allows these to surface, and with them the themes of gender politics, “out-of-water”-ness and cultural disparities. Sicario communicates them with elegance. Hell or High Water speaks more, though the showing reigns supreme. From the look of it, d.o.p. Ben Richardson and composers Nick Cave & Warren Ellis continue that pattern with cool-headed capturing of the bleach-white terrain and an airy score laced with eerie whispers, respectively. Richardson and Sheridan can also astonish with their ability to stage a gunfight, doesn’t matter if it occurs within the perishing walls of a drug den where young future-squanderers frequent or out in the open next to a grand oil rig that sullies the landscape.

At one point on the ride down Wind River, Cory finds Martin performing a death ritual, the latter’s face painted and spirit feeling the breeze. It is later revealed that Martin is doing everything off-the-cuff, uncertain of his proceedings since there are no elders left to supervise him. Both the guys’ (and ours’) laughter promptly morphs into a minute of reflection, of how the thirst for growth of one society can deracinate the prints that give existence to another. Martin seeks peace for Natalie, but where he does it isn’t far from a multi-lane freeway. Such a contrast forces us to ask whether Native Americans of the reservation, or Native Americans, will see a time when they are completely spared from the white man’s reaping.

Until then, Sheridan’s work cinematically addresses one of the coldest crimes to have ever been committed (and is still happening) on this star-spangled soil. And the statistics for it are under-reported.