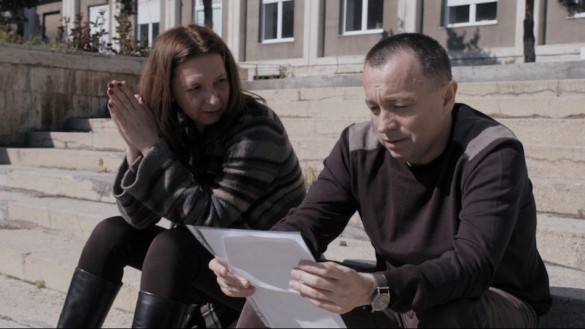 Synopsis: Director Alexander Nanau follows a crack team of investigators at the Romanian newspaper Gazeta Sporturilor as they try to uncover a vast health-care fraud that enriched moguls and politicians and led to the deaths of innocent citizens.

With “fake news” and disinformation all over, when conspiracy theories become general truth instead of the actual truth, it is good to be reminded that legitimate journalism and not clickbait can actually make a real impact. Such an institution has to be protected for the people to be aware of what their government is actually doing rather than what they say. Such governments fear of a breakdown of the state if every dirty story is uncovered, but hasn’t stopped such citizens to protest rigorously and bring everyone down. Take Romania in 2015 for example, covered on the ground in a fly-on-the-wall documentary capturing the chain of events.

Director Alexander Nanau tells us straight away the catalyst of the event and shows the moment the tragedy occurred and the panic from its victims. A fire during a concert in a nightclub killed 27 people on the spot, with more dying days apart in hospitals. Quickly, it is discovered that anti-biotics to attack bacteria on burn victims were heavily diluted, rendering it useless when applied to those in the ICU. A tragedy turns into outrage over corruption by authorities who let the club open despite it now having fire exits as well as healthcare companies responsible for the dilution. The center of the expose is journalists from Gazeta Sporturilor (“Sports Gazette” in English) who use their pages on soccer to instead publicize the ugly truth as to why many had to die for the cause of saving money for a private healthcare manufacturer.

In their offices, meeting with grieving parents, whistleblowers, and on-scene press conferences with government officials, the audience is right there as another attendant to the meetings. The government has collapsed and it is now a collective effort of independent-minded figures to get everyone together, root up problems in the healthcare sector, and bring justice to those families grieving over the loss of their loved ones. There’s a feeling of urgency as the journalists go digging, even more, to find how much of a swamp the industry is in that country, and the difficulty it is to drain it. Sound familiar?

Collective is a damning indictment on what many governments are accused of on a daily basis, but this is one where the blood-stained hands of politicians and technocrats are all caught in the cookie jar. It is a story of human endurance in the face of a national tragedy and fighting the establishment, symbolized by a survivor of the tragedy who does not hide her terrible burns and scars are over the back and arms and even poses naked. It is not a fairy tale story, but one of the cynical feelings many have towards the rulers as the truth seekers risk it all to pull out the rotten core.