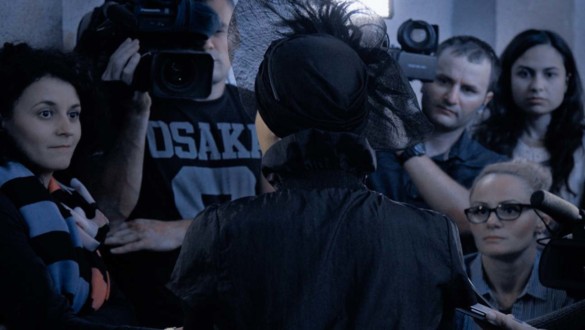 Synopsis: A documentary that follows a team of journalists and whistle-blowers as they expose corruption in the Romanian national healthcare system.

On October 30, 2015, 27 people died, and 180 were injured in a fire in the Colectiv club in Bucharest, Romania. This would create a turmoil in the national scenario that resulted in the establishment of a technocracy until the next general elections.

However, the nightmare was just starting. In the next four months, 37 of the 180 injured died in the hospital from infections acquired while being treated. This information bomb drops in the first 15 minutes of Collective, documentary by Romanian director and cinematographer Alexander Nanau, which creates a domino effect that exposes a massive corruption network in the Romanian national healthcare system.

The film follows journalists, victims, doctors, and politicians in real-time, as they try to deal with so much information about the rotten system. Even in one moment of the story, newly appointed Health Minister Vlad Voiculescu asks himself, “How can all of this be solved?” The corruption network is so profound and intertwined that practically everyone from the old government is involved.

Precisely the commitment to present the multiple crises that hit Romania as they are happening is what makes of Collective one of the most precious documentaries of the last years. The fact that it centers in the corruption issues within the health sector makes the story more powerful as we appreciate it under a lens of COVID-19 where many politicians have reacted wrongly – motivated by dishonest reasons – in response to the pandemic.

Considering that it exhibits the corruption of a system maintained by greed and power in which the citizens are the ones that pay the price, this story of inhumanity is too close to be perceived as foreign or fiction, whether you live in Romania, the United States of America, or Latin America. This reality is universal.

Nanau splits his camera in several fronts, each one of them offering damning truths and frustrating results. We witness the limbo in which the victims and their relatives live, months after the fire with no answers to the deaths of those with non-life-threatening injuries. We follow the Sports Gazette, the sole newspaper asking uncomfortable questions and exposing the corruption within the healthcare system. We meet the whistle-blowers exposing years of malpractice, politically motivated leaderships, illegal acquisitions and designations, and corruption. In this documentary, the negative surprises keep appearing.

However, some silver linings can be found in this ocean of depression. The journalists’ commitment, with special emphasis on Catalin Tolontan, leader of the Sports Gazette, is impressive and encouraging.

In one public debate in which Tolontan is questioned about his motives for presenting so many critical revelations he says: “There is no final goal, I think, in my profession. All I am trying to give people is more knowledge about the powers that shape our lives.” This kind of thinking is the one that propels his cause and that later puts him on harm’s way.

Health Minister Vlad, civilian and activist, quickly proves to be part of a new generation of leaders uninterested in continuing lying. An appointment that had the purpose of being the target of unrest, he turned out to be a reformer committed to right some wrongs.

However, these figures of change and dissent are probably the most tragic characters in the documentary. The people that drive Collective go against a machine of power and money with a shield of impunity. The story comes to an end with the general elections, which reflect the tremendous divide in the country and the way the citizens sabotage themselves and vote against reforms and progress, a scenario that is also too familiar to ignore.

The documentary does not finish with a hopeful eye. What changes will prevail of those forced by the brave whistle-blowers and journalists? How many of the reforms propelled by Vlad will survive once real politicians resume activities? The forecast in the documentary is not optimistic.

This is a documentary that questions the humanity of political leaders and doctors, two professional figures that are supposed to look after people. As such, it is excruciatingly fitting that one of the most powerful reflections in the story comes from one doctor/whistle-blower: “As my mother puts it, we’re no longer human. We only care about money.”

Collective is a worthy addition to the genre of investigative journalism, easily compared – but naturally superior – to the likes of fictional movies Spotlight (2015) and All the President’s Men (1976). Given that Collective happens in real-time as conspiracies are uncovered, Nanau’s film is essential viewing.