Movie Review (Sundance): ‘Coda’ was the Perfect Start to Sundance and the 2021 Year in Film 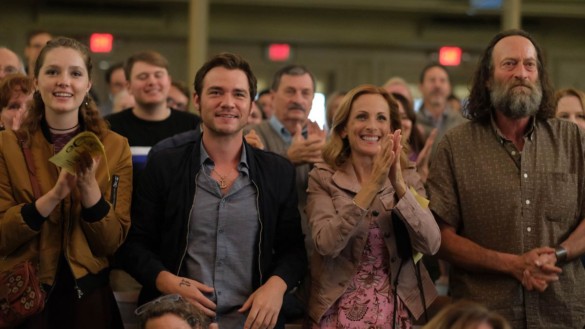 Synopsis: A hearing child in a deaf family finds herself torn between pursuing her love of music and her family’s reliance on her to be their connection to the outside world.

Sian Heder’s new film Coda not only opened up this year’s Sundance Film Festival, but it’s also likely going to win the Audience Grand Prize in the process and it already scooped up a record deal after Apple+ bought it for $25 million (a new Sundance record). Who’s to say how good the crop is overall, but Sundance 2021 opened with a banger. It certainly has a pathos given its central conceit, but Coda is a crowd pleaser, cleverly dropping dialogue bombs with precise timing, using sign language to crass effect, and creating space for levity to counterbalance the film’s emotion.

At the center is Ruby (Emilia Jones), the only hearing-abled member of the Rossi family as her mother, father, and brother are all deaf, leaving her in a bit of an outsider. Her father Frank (Troy Kotsur) and brother Leo (Daniel Durant) are fishermen and need Ruby to be their ears while out on the sea to help keep them all safe. We quickly learn, however, while she loves her family and is willing to help out on the boat, she has a passion for music and she joins the school choir. Soon she is paired with her crush Miles (Ferdia Walsh-Peelo) for a duet and her choir teacher Bernardo (Eugenio Derbez) begins mentoring her as she prepares for college.

The fundamental dichotomy of Coda is a fascinating one. As someone who already distinguished from the rest of her family, Ruby’s fervor for music further isolates herself from her family since they (obviously) cannot partake in her interests. Additionally, as fishing commercialization and politics becomes a challenge to local fisherman, Ruby encourages her father and brother to speak up and defend themselves. The caveat, though, is that she’s needed in that process to translate. An interesting irony, indeed. These two sides of the pendulum increasingly swing away from one another, eventually leading Ruby to a crossroads where she has to choose her family or music.

It’s in that where the film’s ideas on empathy and family thrive with opulent beauty. Ruby’s mother, father, and brother all respond to her musical talents in different ways, and Heder fully realizes those disparities in ways that will leave you breathless. A scene that involves Jackie discussing her disappointment when she found out Ruby was hearing enabled is revelatory. It’s sincere and honest, and one of the best moments of the film. There’s a musical moment in the third act between Ruby and her father Frank that will leave you in a puddle of tears. This comes off the heels of a concert scene in which Heder brilliantly shifts perspective from those in the audience who can hear Ruby’s duet with Miles, to Jackie and Frank, who are reliant on cues from those around them to understand what’s happening on stage. A blistering cocktail of writing and direction, throughout the film, but especially in the final third, lead to some breathtaking and tender moments of emotion.

Heder’s direction is fantastic, but not enough good things can be said about Emilia Jones, who gives a breakout star performance in Coda. The way she emulations isolation and insecurity is wonderful, yet there’s a quiet strength to Ruby that also comes through wonderfully in Jones. Marlee Matlin and Daniel Durant are also quite good in their respective roles, but it’s Troy Kotsur as Ruby’s father that I find unforgettable. His abrasive humor is hilarious. You will not forget the moment he has with young Miles after he and Ruby catch him…well, doing something fun we’ll say. Yet, simultaneously the tender care of Frank toward Ruby in those final scenes are full of warmhearted goodness that will leave you full. It won’t get Oscar play, but it’s a supporting performance that, in an ideal world, would still be talked about at year’s end.

Speaking of, it’s hard to say if Coda will linger on past the Sundance Film Festival. It’s a film that I predict will resonate with audiences (Apple is certainly banking on that) and for great reason. It cannot be understated how funny the film is throughout, especially the self-awareness the Rossi’s have of themselves and how that leads to crass behavior. Or how it impacts their view of the world around them. Coda isn’t re-inventing the wheel narratively, but it does imbue sincerity into its characters and what drives their choices. In execution, it’s a film with rich characters and genuine emotion.