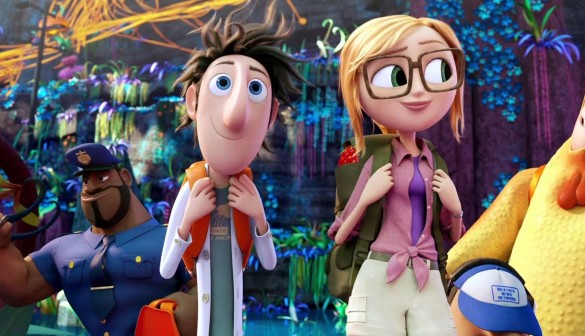 Synopsis: Flint Lockwood now works at The Live Corp Company for his idol Chester V. But he’s forced to leave his post when he learns that his most infamous machine is still operational and is churning out menacing food-animal hybrids.

DIRECTION
Cody Cameron and Kris Pearn knew exactly who they were preaching too in Cloudy with a Chance of Meatballs 2. Not all animated films are built solely for kids, but this is definitely one of those movies. It’s cheesy, in all kinds of pun-y ways, goofy and is going for a kid’s laugh on every scene. The visuals are good and sometimes pretty funny. Cameron and Pearn’s biggest misses is the story, which doesn’t live up to the first one. Everything else is right in line with the first film. Overall though, it’s a film adults may not have as much fun with but your kid’s will love it.

SCRIPT
The story literally picks up right after the end of the first film. And I mean literally. We see the final scene of the first Cloudy and the story picks up from there. We find out that Flint Lockwood has an inventor idol, Chester V. and his The Live Corp Company, who has been tasked with the clean up of the island. The infamous food making machine is still alive and making menacing food animals that are destroying the island and trying to swim to the mainland. Lockwood is eventually tasked with going back to the island to destroy his machine once and for all. Every cliche you can think of is here and it lacks the kind of heart that made the first film so likable. Now, this movie does have heart and it takes a turn toward the third act that’s pretty good and says something about your friends’ and what they should mean to you. It also says something about having compassion towards things you may judge at a first glance which I though was done well too. But at some point it just becomes complacent with a cheesy, over-the-top story and relies heavily on puns to make it entertaining.

PERFORMANCES
The performances are much like the first one and they don’t give anything new. Bill Hader does a good job of playing Flint once a gain and brings the kind of voice to this character that was fun in the first film. Anna Faris is good as well and even brings a little depth later on in the film. Andy Samberg once again plays the annoying friend who likes to dress up in a chicken soon and Terry Crews plays the tough guy cop who won’t cry. I will say Kristen Schaal plays an ape in this film that eventually has a bigger role and delivers a good performance. She was good here. Given the script, these guys made the film funnny and did what was needed here.

SCORE
The music here is far from the best of the year for an animated film but it does deliver on some fronts. Mark Mothersbaugh’s score is okay but mostly forgettable as the soundtrack music cloud’s, all pun-intended, the score. The soundtrack music isn’t the greatest either but does add a nice variety that brings some good touches to the film.

FINAL THOUGHTS
As an animated film, Cloudy with a Chance of Meatballs 2 will bring lots of laughs for kids. They hardly wrote this with parents or adults in mind but it still works in many ways. It’s very cliche-driven and the story lacks big time compared to the first film, but it does have some good moments in the third act of the film. I wouldn’t waste money on this in 3D either. If you like food pun though, it’s the one for you.