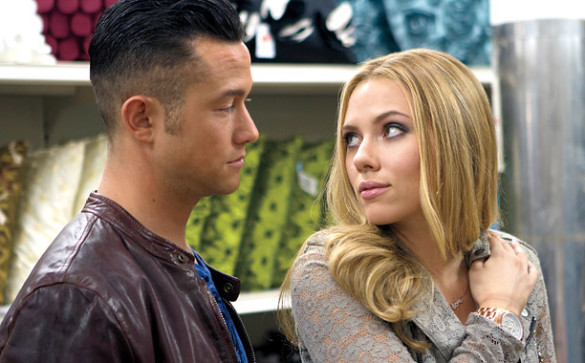 The feature-length directorial debut of one of America’s favorite young Hollywood stars is calculated, intelligent, and will spark a slew of  different conversations from moviegoers and critics alike. For myself, I had been looking forward to this movie all year, and had high hopes for it. Not only do I love a good social commentary, but since Lost in Translation, I’ve thought Scarlett Johansson is one of the more underrated Hollywood actresses and have wished for her to get more challenging, interesting roles. Her beauty overshadows her talent, and she is written off much too quickly by pundits. Unlike earlier this year with my disappointment in Sofia Coppola’s The Bling Ring, my lofty expectations were not just fulfilled, but built upon. This movie opens up with some shots that immediately tells the viewer to take note of the cultural commentary which this story is about to embark upon. A similar opening this year came from Spring Breakers, although Don Jon is much more softcore and subtle. I’d say that’s a good comparison of Gordon-Levitt and Harmony Korine, too. They both share their experiences in life in vastly different ways, but are able to connect with engaged viewers who are prepared for a satire and can relate to the world he works in. The way Gordon-Levitt directs this film shows he’s been paying very close attention to the talent which has surrounded him during his impressive yet young career. His choices are modern, memorable, and sometimes even innovative. This is a guy who understands American culture beyond the hills of Hollywood. This is a guy who connects with his audience. This is a guy who we have watched grow into his own, and if Don Jon is a preview of what is ahead for him, Joseph Gordon-Levitt is not only going to maintain his place in front of the camera, but behind it as well.

The story follows Jon, a guy in his late twenties who we might mistake for a cast member of MTV’s Jersey Shore. Fulfilling the “bro’ lifestyle by working out, hitting the clubs, and “smashing”, Jon sees women as little more than a piece of meat. As the dust settles from our introduction to Jon, we realize there is more to him than we expect. His addiction to pornography is as faithful as his addiction to the confession box after every Sunday Mass. His family life is interesting, and the people he’s surrounded by genuinely care about him (all except for his girls, of course). Gordon-Levitt wrote a script that feels current, if not futuristic. It shows the problems of young America through a brutally honest and refreshing lens–what we expect of each other, how we choose partners, and how selfish we can be. He provides caricatures that unfold into people we can identify with, even if we hate to admit it sometimes. This movie isn’t just about porn addiction or stereotypes, but it’s about family dynamics and generational differences. The most impressive thing about this script, though, was Esther (Julianne Moore). This character is not only enormously innovative and surprising, but also integral to the movie’s themes and ideas. The exploration of what millennials want in terms of a partner is tantalizing and after the movie, my date and I had a 2 hour conversation about us–the millennials. This script does what any great movie can do–it entertains, it provokes, and it moves the cultural conversation forward. This is a groundbreaking piece of screenwriting and I can’t wait to see what Gordon-Levitt has up his sleeve next.

Joseph-Gordon Levitt completes the hat trick with his performance as Jon (which you know enough about already if you’re still reading). Scarlett Johansson is a consistent, confident, and well-versed actress who flexes her muscle as Barbara, the primary love interest of Jon. When watching Scarlett in this movie, keep in mind what roles she has done in the past and you will gain a clear appreciation of how much skill and range she possesses. Her accent in this film is so enjoyable, and Barbara’s vapid personality traits in some areas of life represent exactly what people might stereotype Scarlett as (so she knows exactly how to act them out). Tony Danza’s performance as Jon Sr. recalls memories of the surprisingly good performance given by Robert DeNiro in Silver Linings Playbook. Here we have a veteran actor who is normally cast as men similar to his role on late-eighties sitcom Who’s The Boss?. Here, he proves he has not lost a step even if his age does show physically. Julianne Moore’s performance might not seem as impressive as the character she is given but at the same time her presence itself in the film lends a great deal of credibility to the theme that Gordon-Levitt focuses on.

The score/soundtrack to the film was nothing amazing but it did feel current, fresh, hip, and not overbearing. A memorable sing-along featured in the trailer occurs at a perfect time in the film, and even if this strength is the only thing you remember about the musical selections here, that’s not a bad thing.

Don Jon ranks among my favorite films of 2013 because I am around the same age as Jon and I do face similar challenges. With that said, this is a great piece of work and I believe most audiences around the country will admire its honesty if nothing else. Also, if you don’t discuss this one afterward, it won’t be because you aren’t left with anything to talk about.