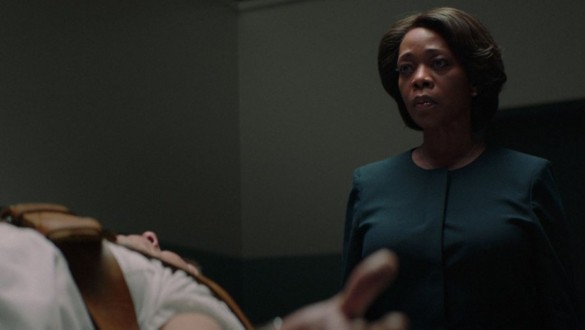 Synopsis: Years of carrying out death row executions have taken a toll on prison warden Bernadine Williams. As she prepares to execute another inmate, Bernadine must confront the psychological and emotional demons her job creates, ultimately connecting her to the man she is sanctioned to kill.

Most of us trudge through our day job, counting the minutes (or seconds) until we can clock out and live our real life. But some have more than a job, more than a career, but instead a calling. We may preach the separation of work life and home life, but how do you leave a calling behind at 5pm? In Clemency, directed by Chinonye Chukwu, that question is asked, but there are no easy answers. These callings can be rewarding for a time, but at what cost? What is left in its destructive wake?

The film follows a possible execution of Anthony Woods (Aldis Hodge), overseen by Warden Bernadine Williams (Alfre Woodard). Clemency is difficult to watch, as it opens with a nearly botched execution that sets in motion our lead’s rumination on her calling. As she says later in a powerful moment, “You can’t understand. That’s the problem. I don’t know how to fix it. I am alone, and nobody can fix it.”

Let’s not mince words, this is Woodard’s best performance in a long and storied career. In a dramatic story like this, a showy performance may be expected, after all, a man’s life is on the line. But Woodard’s choices, to play each scene close to the vest, nearly regardless of setting, make for a much greater impact. Despite Bernadine’s best efforts, that contained sorrow, despair, and even rage finds ways to leak out.

In the face of such a reserved character, one who holds space for her inmates instead of lashing out with words or violence, it becomes necessary to follow her outside of the bars of her prison. In some moments, particularly those fueled by alcohol, she is an absolute delight and it is clear that she desperately desires a release that she will never truly allow herself. The career, the calling, trumps all of her needs. In others, she sees the world as an unfixable, untenable place, in which something is always needed of her. In expertly blocked and acted scenes with her husband, Jonathan (Wendell Pierce), we are allowed to see her pain, even if Bernadine will never get close enough for honest healing.

Aldis Hodge, whether onscreen with Woodard, or by himself, holds his own with a difficult role. Clemency challenges the audience by never giving us a clear picture of his past. This focuses our empathy in the here and now and shows us just how terrifying his lack of freedom can be. When our choices are stripped from us, what is truly left for us to do? Woodard asking him about his last meal and where he wants to be buried is soul crushing because these questions cease to matter, as does any amount of male pride. Hodge picks his moments and lets that emotion fly, sometimes in guttural, primal release.

One of the few areas to find fault with the film is that, if anything, it tries to do too much with its runtime. Obviously, most of the plot focuses on Bernadine and her mostly interior struggles. Additionally, we have not only Anthony’s solo struggle, but also a few scenes with his lawyer and his ex-girlfriend. These segments are fine, but they aren’t given enough time to breathe. His lawyer, Henry, played by Richard Schiff, who has made a career of playing angry liberals, does much the same here. It is by no means a poor performance, but feels both too much and not enough. He is given some emotional dialogue, but there is a desire for more background between these two, who have clearly become friends. Danielle Brooks, on the other hand, portraying Anthony’s ex-girlfriend Evette is an absolute powerhouse. This, sadly, is relegated to one scene, and although the reasons why are obvious, it still feels like a wasted opportunity.

But, of course, when you boil it all down, this is about Chukwu’s direction and Alfre Woodard’s face. Chukwu shows supreme confidence in not only the subtle movements of her camera but in her lead actor, as well. Nearly every important visual and emotional moment is focused for lengthy periods on Woodard and the film is the better for it. There is a supreme balance met between the character of Bernadine Williams showing nothing but strength to the people in her life and Alfre Woodard allowing the audience in to see the veneer cracking ever so slightly.

Clemency is technically about the death penalty, but it manages to not guide the audience to an answer. Bernadine is in an impossible position. Anthony is, likewise, trapped without choices. And truly, no one can help either one of them. The two characters are in such different positions, and yet, they both carry a heavy burden. Clemency is the kind of film we don’t get in the theaters very often anymore, and we should take advantage of it. Chukwu and Woodard together certainly do not tell an easily digestible story, but they do tell an absolutely necessary story of our humanity, pressed to its limits.