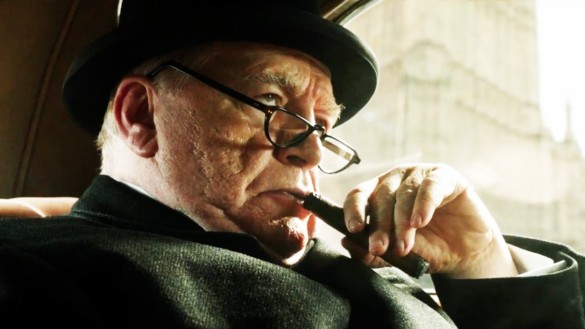 Synopsis: 96 hours before the World War II invasion of Normandy, British Prime Minister Winston Churchill struggles with his severe reservations with Operation Overlord and his increasingly marginalized role in the war effort.

Jonathan Teplitzky’s Churchill follows the British Prime Minister Winston Churchill (Brian Cox) in the days leading up to the D-Day Normandy landings, painting a picture of a man haunted by the First World War who is anxious not to repeat its military mistakes.

Churchill’s hat becomes a symbol for the man throughout the film, with images of his hat rolling across the British shores that face the channel and, beyond, the French coast onto which thousands of men will soon arrive by ship to invade Nazi-occupied France. The moments in which Churchill dons his famous hat, wears it to the beach and even raises it to the sky whilst facing the French coast may be a little on the nose but it is a visually striking cinematic device to illustrate not only the iconic image of the man himself but his desperate desire to lead from the front and show his troops the support of the nation.

Churchill speaks for “the ordinary fighting man” and tries desperately and ultimately in vain to show his support through his physical presence on board one of the ships headed to Normandy when he is unable to change the plans for Operation Overlord altogether. Brian Cox delivers a very strong performance as this much-played historical figure and is compelling to watch in his struggle against plans for the D-Day landings with their alarming similarities to the British military disaster at Gallipoli in 1915. Unfortunately, however, the script requires that all of his – and indeed, the other characters’ – struggles play out through their dialogue and not in the nuances of their physical performances, leaving its talented cast to air every concern and thought to one another or, indeed, to God.

Low-angle shots highlight Churchill’s double chin buried into his high, broad shoulders; Cox’s physical performance has this great Briton down to a tee but it is a shame that the physicality and expressions of this talented actor are not relied on more greatly to project his inner turmoil. In one particular scene, the distraught Churchill lies on his bed motionless having been given the devastating news that Operation Overlord will go ahead as planned. Rather than letting the silence speak for itself, Churchill instead unleashes another speech in which he describes the shortcomings of First World War tactics to the audience, ahem, sorry, to a room of people who know in detail what happened because they were either there or reading the newspapers at the time. It can feel at times like “Let’s Recap World War One and the start of World War Two with Brian Cox” who, alas, is the victim of a script that has no faith in its audience’s basic knowledge or its ability to pick up on any form of subtlety.

The talented Miranda Richardson does her very best with the same hindrance, portraying Clementine Churchill’s concern and dejection in a nuanced performance that is frequently interrupted by the need to say what we can already see she is experiencing. There is also, amongst the film’s fear-fuelled final scenes, a touching relationship that plays out between Churchill and his secretary Helen Garrett (Ella Purnell) which, if a bit contrived, adds a human perspective to the men headed for the front. In other moments of the film, the focus each actor is placing on accurately depicting an historical figure hinders the ability to interact in a realist manner. When Churchill and Eisenhower (played ably by John Slattery) converse it feels less like a discussion and more two performances of famous people happening opposite one another; yet another moment when the clunky, explanatory and repetitive script does not assist its cast.

Credit where it is due, the cinematography in Churchill is wonderful, with numerous shots featuring the silhouettes of characters and striking architecture stood against the bright British sky. There are moments on the beaches of England that are visually reminiscent of the First World War, not only in the yellow and muddied filter that screams of the misery of the trenches but in the film’s opening scene in which Churchill envisions barbed wire and bodies littered across the coast.

A review of this film is not complete without crediting James Purefoy for a fantastic performance as King George VI, managing to accurately portray the King whilst sharing a moving moment with the Prime Minister in a scene that, blissfully, is not another refrain on Churchill’s ‘this is not a good idea’ or ‘I’m trying to win a war’ speech. Churchill’s famous speech on the day of the D-Day landings, too, is a highlight of the film; a rousing moment with an evidently scrupulously studied performance from Brian Cox.

The film certainly has its inspired moments and at no point was I tempted to give up on it, but you have to brace yourself through a slow start and a lot of grating dialogue to appreciate some really skilful performances from the cast.