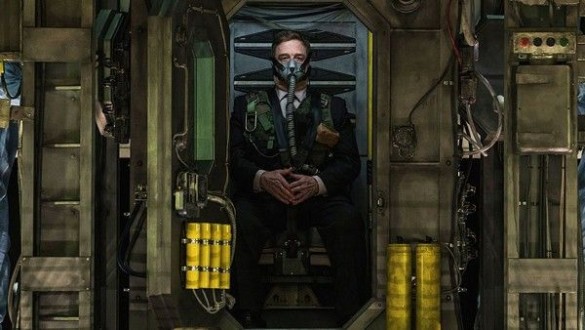 Synopsis: Set in a Chicago neighborhood nearly a decade after an occupation by an extra-terrestrial force, Captive State explores the lives on both sides of the conflict – the collaborators and dissidents.

What you won’t find in Rupert Wyatt’s new Sci-fi thriller is intergalactic land to air combat with an alien presence and you won’t find large-scale gunfights in deserted cities. Take everything you’ve learned about alien invasion and toss it, Captive State isn’t and doesn’t want to be Independence Day. It isn’t concerned with humanity taking a closer look at ourselves collectively and seeing what we can accomplish if we disregard our differences and recognize our similarities. It isn’t about us versus them. Captive State is about defiance and believing in the greater good. It is about the lengths people will go and sacrifices they will make to ensure a future that contains hope and possibility. It is a masterfully woven story that plays out more like an espionage or spy thriller as opposed to an action sci-fi romp and is surprisingly clever in its execution. However, it will also likely be a film that will be slept on which is unfortunate considering Captive State truly caught me off-guard and that hasn’t happened to me for some time.

First off anyone familiar with Arthur C. Clarks 1953 science fiction novel “Childhood’s End” will find some similarities in this film. They are overall different stories with different messages but some parts of the relationship between humanity and the invading intelligence and how they rule over us are comparable. I found it easy to accept and settle in mentally to this new world due to having read the book. The film places us years after the invasion. Humanity has lost the war leaving Earth now under alien governance. The film narrows its focus down to the city of Chicago where our leaders and law enforcement now act as administrators policing and enforcing the new laws under indirect alien supervision. In this way the aliens in the film are rarely viewed, I would estimate they are on-screen less than 10 minutes of the 109-minute run-time. Their influence, however, is felt very clearly with humanity kept in check by means of technology and social order and this is the films main theme, the means by which people are collectively kept in order.  Whether it be through fear, duty or greed it all serves as a way to pacify and control. This is what makes Captive State such an interesting film, it strays far from what we are used to seeing from this genre. If I had to draw comparisons it wouldn’t be Battlefield Los Angeles or Skyline, it would be 2008’s Valkyrie or Chūshingura. Unfortunately, this may draw some viewers away who were looking for action and excitement which the film isn’t totally lacking. But it is a much more cerebral production meant to play out more like a game of chess versus Call of Duty.

While not one particular performance really stands out the overall delivery from the cast is magnificent. Standout roles from John Goodman (William Mulligart), Jonathan Majors (Rafe Drummond) and Vera Farmiga (Jane Doe) give the film life and authenticity and they make it is very easy to imagine each individuals journey that led them to their new roles in this drastically altered society. The only exception would be Ashton Sanders, as Rafe’s younger brother Gabriel Drummond, who I have only seen in one other film, Equalizer 2. His delivery is very similar in both roles which aren’t an issue however I do worry about Sanders being typecast, something I hope he avoids. My concern is in Captive State, Gabriel’s disposition sometimes lacks consistency. In some scenes Gabriel is a defiant kid but still submissive in his body language; avoiding eye contact, slumped head and shoulders and holding his tongue when told to. But other moments in the film he is more outspoken and bold, almost confident. This would make sense if it was showing his progression and growth but soon after one of these moments he reverts right back to the timid kid, unsure and yielding. His performance isn’t bad but more confusing and had me questioning some of Gabriel’s actions. And this is even more evident when placed in contrast to the performance of a veteran actor like Goodman who is steady on-screen and wears Mulligart like a well-tailored suit.

The film’s pacing is its main shortcoming, if I am being honest there were moment’s early on where I found my thoughts drifting off. Not so much because the film is boring but it feeds you bits and pieces of the overall story slowly, sometimes painfully slow. Additionally, Captive State treats its audience with respect, it isn’t too forthcoming or obvious with certain details and world building. It offers pieces of the puzzle but forces you to find out where they fit. For some, this might be frustrating but I found it intriguing and satisfying especially during “Aha!” moments. About 20 minutes in I realized the type of film Captive State is and I stopped waiting around for the action and became more absorbed in the intrigue. Once you get past your own expectations and accept the film for what it is, it’s easy to become engrossed in the plot. The film may at times feel all over the place but there is a method to the madness and the end result is satisfying.

This new take on alien invasion took a moment for me to accept but in the end, Captive State is a brilliant film. It left me speechless and when I left the theater I wasn’t exactly sure what I thought but I definitely knew I enjoyed it. It is a film that may require an additional viewing to fully digest and I intend on catching it another time before it leaves theaters and would recommend the film for anyone wanting a fresh take on a story that has been told many times. Just remember to give the film some time to settle and don’t rush to judgment. If you sit back and let the film take you where it will, you’ll find a terrific story that will surprise you and maybe even leave you a bit inspired.