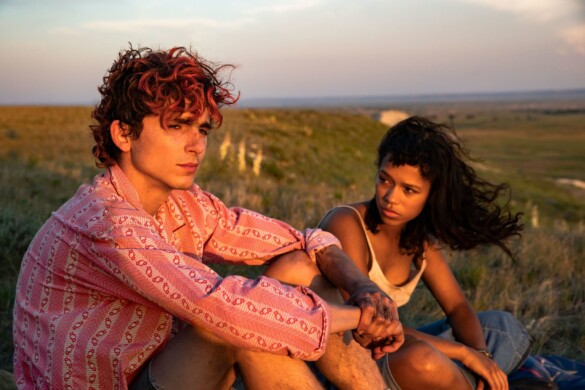 Synopsis: Maren, a young woman, learns how to survive on the margins of society.

After a teenager gets her finger bitten off because of the cinnamon nail polish she has, a man takes her cannibal daughter to flee from the law. Welcome to this twisted entry in middle America as we follow Maren, played by Taylor Russell. an eighteen-year-old who suddenly finds herself struggling for her own survival. Maren is an outsider in Reagan’s America; she is a cannibal, naturally born as one who cannot resist human flesh when it attracts her. Now looking to find her mother in Wisconsin, Maren goes on a cross-country trek from Maryland westward, encountering a Southern loner, Sully (Mark Rylance), and a skinny young man in torn jeans, Lee (Timothee Chalamet), and both are cannibals as well. These are her first encounters with others like her on society’s fringes.

The cannibals can only survive amongst their instincts while keeping their unusual appetite a secret. As Sully tells Maren, they are called “Eaters,” for they can smell their own kind, just as how he is able to identify Maren as one. Maren finds in Lee someone who can help her move on with her quest and fall in love. It has an odd tone throughout because the story as not just one genre, but five: drama, romance, horror, suspense, and even a dark comedy. While the relationship between Lee and Maren is believable, how the drive plays out can leave a bitter taste in your mouth.

Camille DeAngelis’ young adult novel is entirely original and modernist in her approach to a coming-of-age story. How screenwriter David Kajganich adapted it for the screen, however, underlines the fault in the whole film. It plays on too many genres and too many emotions to really draw us in and keep us there. For director Luca Guadagnino, who reteams with Chalamet five years after Call Me By Your Name, it is a meandering attempt to mix millennials’ fascination with the gothic, the Americana feeling as seen in Paris, Texas, and the budding romance of two star-crossed lovers.

Other performances are fleeting, even if they are really good. Michael Sthulburg is a cannibal hick who drinks Budweiser and talking about eating an entire person (hence the title) is good, but it’s only that one scene. Jessica Harper as Maren’s adoptive grandmother Maren comes to get the answer she is seeking: she’s in and out. Going back to Sully for a moment, he’s in for just three scenes. This is not The Straight Story, but rather one that travels left and right like someone’s intestines. Speaking of which, yes, they are cannibals, but in a story with subtlety throughout, the amount of gore witnessed does turn off the mood.

The last scene of the film is what really does the story in with a sudden final act that totally embodies the confusing form Guadagnino is going for. It’s the only part where the score sounds like one from Trent Reznor & Atticus Ross when the mellow soundtrack doesn’t feel like one of theirs. There are more questions as to what should be a clear-cut ending and it leaves us unsettled and unrewarded. The answer to how you blend a story like this is that it does not taste well, cannibal or not.