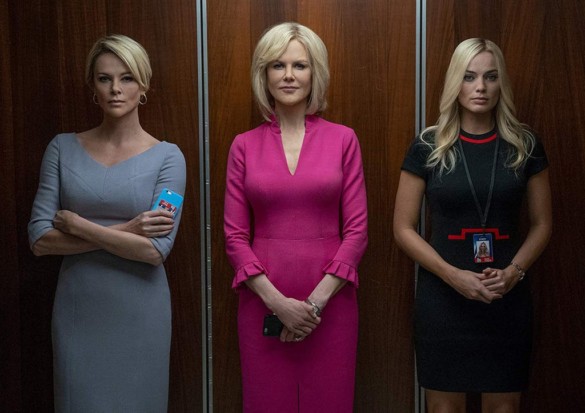 Synopsis: A group of women take on Fox News head Roger Ailes and the toxic atmosphere he presided over at the network.

Politics affects daily life. It affects everything. That’s why whenever anyone asks another person to “keep politics out” of something, it’s always suspect. Usually it means the person wants to keep a certain type of politics out of something. Whether it’s possible to separate politics is an entirely different question than whether you even should.

I say this because I’m wondering if the political forces and ideas at the heart of director Jay Roach’s new film Bombshell may get in the way of the story this film attempts to tell.

For one, it would certainly be impossible to try to separate politics from this story, and I’m certainly not advocating that it should have been attempted. This is a story about Fox News, for goodness sake. You have to deal with the politics. Roger Ailes (played here by John Lithgow) was one of the leading political figures of his time. He built a network that changed the political landscape. You can’t tell this story without getting into politics.

But what is “this story” exactly? Well, the film looks at the sexual harassment lawsuits that rocked Fox News and forced Ailes out of the network he built. It centers on characters – both real and fictional – that bravely spoke out about the harassment that they and their colleagues were subjected to. There is Megyn Kelly (Charlize Theron), the network star; Gretchen Carlson (Nicole Kidman), who was the first major network personality to speak out; and Kayla Pospisil (Margot Robbie), a fictional character who joins the network as an associate producer at the beginning of the film. These three will be our main window into how women are treated at the network, and how they must react to that treatment.

The cast in this film is absolutely fantastic. You could probably tell that by the names I’ve already listed, but then you have supporting turns from the likes of Allison Janney, Malcom McDowell, Kate McKinnon, and Mark Duplass. The acting on display is wonderful, but Robbie steals the show in my book. Each of the three leads performs their part well, but I thought Robbie outshined the rest. She embodies the youthful vigor and simultaneous naiveté of this fresh talent walking in the doors of Fox News. She wants to be there. She’s dreamed of it. But she quickly realizes that it may not be all she dreamed.

I do wonder if Robbie was aided in this particular instance by not having a real-life shadow hanging over her character. The character of Megyn Kelly was particularly difficult for me. Theron really gives a fine performance, but everyone watching this film knows Kelly. Even Carlson has at least a semblance of mystery. But there always seemed to be a conflict at play. I don’t mean there was conflict at the heart of the character but rather in how exactly to portray her. Conflict within a character can give an actor a wonderful opportunity to give a fully realized performance, but a bifurcated approach into how to handle a character dulls that opportunity. I felt that happened with the approach to Kelly in this film.

What the film absolutely nails is the makeup. Theron looks like a mirror image of Kelly, and Lithgow’s transformation into Ailes is absolutely remarkable. The makeup team’s work here is certainly Oscar-worthy, and I thought it was the best element in the film.

But here again we come to the issue of real and fake. Understand where I’m going here – Bombshell is not a documentary but rather a feature film. It is a fictional narrative that depicts a real-life story. We should not expect perfection from the film, and the viewer needs to understand that creative license will be taken. A title card before the start of the film makes this very clear. At the same time, that creative license needs to be subtly hidden. The makeup is a perfect example of this. We know these are actors playing parts, and yet the makeup team causes us to suspend our disbelief through their incredible work.

The script by Charles Randolph, unfortunately, does not accomplish the same feat.

Much of the film felt like it came out of a writer’s room where the only idea was – “Let’s figure out what lines of dialogue would be hilarious for someone at Fox to say.” Much of the dialogue is far too convenient. Again, we all understand that this is a fictional tale, but when you have characters underlying the manufactured quality of the film, it pulls us out of the story. There have been great films that have pointed out this manufactured quality inherent in movies, but it is a very fine line to walk. It’s why Persona is one of the all-time greats – there aren’t many people who can nod to the “fake” nature of filmmaking like Bergman did there.

An example is when Kelly is talking with her husband, Doug Brunt (Duplass), and she asks whether her big mouth has ruined their lives. Doug responds, “Not yet.” It is too perfect of a response. We know what has happened to Kelly in the time since this would have occurred. It feels false because it’s too convenient. It’s too true. We shouldn’t expect a creative team to figure out exactly what Kelly said at any given moment and put that in the script. But we should expect them to hide the fact that such an idea is impossible a little bit better than they do here.

The only one of these attempts at satire that worked for me was early in the film where Kayla mixes up an on-air graphic – showing a picture of Don Henley instead of Glenn Fry. She responds that she doesn’t know “secular” music. That’s funny. It’s good satire, and it makes sense within the narrative of that scene. It doesn’t pull us out of the story, and it also comments on the type of person that might work at Fox News. But so much of the dialogue throughout the film is of the clunkier variety.

I’ll admit, it is hard to separate one’s views of the Fox News personalities in this story from the narrative that the film builds. I’ve seen some commentary about the danger in painting the real-life characters at the heart of this story as feminist heroes or leaders of the resistance.

And this is where my intro comes in – we must remember what exactly the story that this film attempts to tell really is. This is the story of women coming forward and speaking the truth about powerful men. You must remember – Roger Ailes was removed from Fox News before Harvey Weinstein’s alleged abuse was uncovered. That’s not to say that Gretchen Carlson somehow launched the #MeToo movement, but we should consider that when she came forward with her lawsuit against Ailes, the idea of such a powerful man being taken down would have been far less likely. This was a courageous act, and that should not be overlooked because one disagrees with her politics. To #BelieveWomen, you have to believe the ones that once worked for Fox News, too.

The film deals with this aspect of its story by having Carlson speak directly to the camera later in the film. I think there may have been a better way to get at that difficult aspect of wrestling with this film, but it wasn’t horribly handled.

What was a little bit more difficult for me was the way in which the film depicted sexual harassment. For the most part, we only hear about the abusive comments that Ailes and others made (the film only tiptoes around the edges of Bill O’Reilly’s settlement for sexual harassment claims). However, there is one scene that depicts Ailes asking Kayla to hike up her skirt for him to determine whether she will be right for his “visual medium” of TV. He has her continue to raise her skirt until we can see her underwear. It is not just a creepy scene, it is disturbing. I saw the film in a theater with my wife. After we left, I asked her about the scene. She said she felt it was necessary – that we needed to actually see the harassment. I think I agree, but the scene was certainly disturbing, and anyone who has experienced harassment or sexual abuse must be aware that the film will display this in no uncertain terms.

Bombshell is a good film, and it tells a story worth telling. I’m not convinced that Roach was the director to handle this type of material, and there were repeated moments were I felt he went for the cheap laugh and convenient punch line where a sharper eye could have lent the film a stronger quality. Still, this story is powerful enough to push through all that, and the acting performances elevate the power of the story.

Yes, this may be about Fox News. But more than anything, this is about women speaking truth about powerful men. Their acts took courage no matter their political leanings. If we can’t see that, then what are we doing?