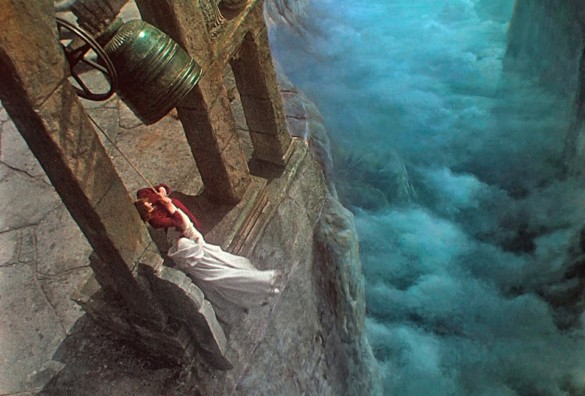 Sex. Lust. Desire. These aren’t the usual words that you would associate with a nun. For decades now, the stereotypical characteristics have often gone hand and hand with rigid or structure, as the nuns clasp their hands together in devotion to God. But directors Michael Powell and Emeric Pressburger set out to tell a story describing the sensuality that may linger deep within these women’s hearts.

Author Rumer Godden had a number of best-selling novels, with Black Narcissus being her most successful. Black Narcissus tells the story of a group of nuns who call themselves The Servants of Mary. Sister Clodagh (Deborah Kerr) is a young woman recently appointed as Sister Superior — the youngest to ever be appointed Superior — as she will oversee the nuns in the building of a new convent along the steep mountains of the Himalayas at the Palace of Mopu. The palace is thoroughly described as the place where the old general would house his concubine — otherwise known as The House of Women.  The nuns overlook the building’s tainted past as they move in, building a school and a hospital to help the locals.  The move is no easy task as many trials and tribulations befall the nuns. Not to mention the nuns inability to help serious cases in their hospital. The fear of failing to cure an incurable illness would have the locals running from the nuns.

The palace walls are covered with taboo subject matter and comes with a local woman who’s more inclined to see the nuns fail as she comes along with the palace like unwanted furniture. Sister Clodagh may soon realize that she may have bitten off more than she chew with her new appointment. What begins as a positive film, the locals working together with the nuns to create this new place, progresses into a darkness as the nuns are possessed with images of their past — constantly reminded of their deepest desires.

Kerr’s performance as the spiritual Sister Clodagh immediately catapulted her to great heights. Soon after Black Narcissus, she would be cast in major Hollywood movies such as, From Here to Eternity and An Affair to Remember. But Kerr is at her most striking within the innocent white garments of the suppressed nun. Sister Clodagh confronts her deepest desire by reminiscing over the love-affair she had with a young man in her youth. Her urges never rise to the surface like a few of the other nuns, but the magnetic force from where the nuns’ unspeakable thoughts come from, is the dominating presence of Mr. Dean (David Farrar), an English caretaker for the palace — often presented shirtless and equipped with a booming voice. The nuns are quick to shake off Mr. Dean’s flirtatious comments. But one not so lucky nun, Sister Ruth (Kathleen Byron) finds the appeal of Mr. Dean not so easy to shake. The cloud is heavy in their mind as the nuns try to drive away these thoughts.

The slow building intensity of Black Narcissus is nothing new to the talents of Powell and Pressburger. The film is them at the height of their career together — sandwiched between two of their other great films: A Matter of Life and Death and, my personal favorite, The Red Shoes. Some describe Black Narcissus as severely underrated, and I can’t help but agree as this film brings the most out of Powell and Pressburger’s directing styles, but isn’t widely spoken of as much as The Red Shoes. In addition to the talents behind the camera, Jack Cardiff’s cinematography is one of the many highlights of the film. He beautifully lights these women from the brightest light of the beating sun, to the darkest shadows, lit with the glow of a single candle. Cardiff was revolutionary in his work, being the first British cinematographer to use technicolor techniques within a film. His talents don’t go unnoticed as Cardiff earned an Oscar for his work in Black Narcissus.

Martin Scorsese, who eventually became close friends with Powell, perfectly describes Black Narcissus as “a cross between Disney and a horror film.” The film brings you in with the simple beginnings of a drama, but before you know it, you’re smack in the middle of horror — the fear creeping behind every corner. Powell, however, classified Black Narcissus as his most erotic film. The eroticism is hidden as the codes of the day prevented too much to be revealed. However, the undertones of the nuns’ suppressed desire lets the film emphasize the idea that the subject matter is all too taboo to speak of. With Black Narcissus’ new mini-series coming to FX, it’s bound to play with the “hush hush” subjects in greater detail. But no matter how many versions grace the screen, it’s the lure, the brooding intensity, and the hidden sensuality, that makes Powell and Pressburger’s Black Narcissus, a magnetic film.