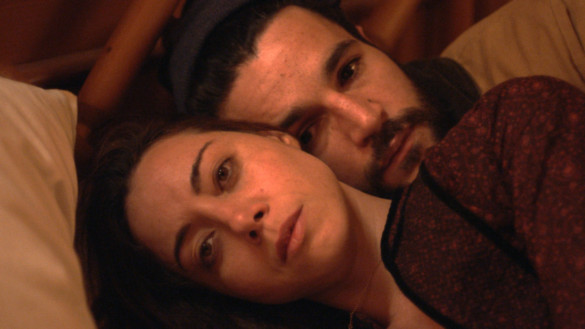 Synopsis: At a lake house, a filmmaker plays a game of desire and jealousy in the pursuit of a work of art that blurs the boundaries between autobiography and invention.

Writer/director Lawrence Michael Levine offers a daring story in Black Bear, a psychological drama that plays with the assumptions made by the viewer, creating chaos and emotional turmoil in its main characters.

Set in an isolated cabin, the story is divided in two parts. The first focuses on Allison (Aubrey Plaza), a former actress that arrives in search of inspiration for her next movie as a director. She is received by the couple formed by Gabe (Christopher Abbott) and Blair (Sarah Gadon), her hosts that are trying to revamp the place as an Airbnb or a retreat spot.

Things start getting out of control once Allison embraces awkward conversations, flirty attitudes towards Gabe – that are positively received – and a lying demeanor towards Blair. Meanwhile, Gabe and Blair are in a difficult spot in their relationship where every single word spoken by the other is received with hurtful comments or snide remarks. This hostility is increased by Allison’s fascination with creating an uncomfortable vibe.

Once we start to embrace this stressing scenario, everything suddenly shifts, and the second part of the movie starts with a new storyline. Now, the three protagonists are artists working on a movie with the cabin as the set. Allison is the main actress, Gabe is the director, and Blair is the antagonist. Even though we are in a new story – and the first part could easily be omitted – some aspects of the previous relations of power are rescued.

Gabe and Allison are now a couple and they have poured everything they have into the production. The women also shift positions on an emotional level. Now Blair is the outsider that conspires with Gabe to torment Allison. Meanwhile, he continues to be emotionally abusive and gaslighting. Now, however, instead of blaming this attitude on his apparent unhappiness, he does it in the name of creativity.

Through this storyline, the movie becomes an exploration of the toxic relationship between muse and creator, and the abuse of power at the hands of the artists that take everything a little too far looking for genius and authenticity in their oeuvres. The fact that Lawrence Michael Levine, director of the movie, has appeared in several projects of his real-life wife (filmmaker Sophia Takal), makes this new exploration a little meta and fascinating.

The new setting means that we get to immerse ourselves in the behind-the-scenes of an independent movie. The complicity or annoyance in the audience will depend on their interest on the topic. Personally, I enjoyed the possibility of peeking into a set where emotions are real, logistics issues are stressful and never-ending, and the scheming and pettiness of actors and directors are evident.

In this point, the technical and creative aspects of recreating a movie within a movie is intriguing and well-executed. The curiosity of the audience increases when the toxic environment of the place is revealed and some of the scenes in the previous half are recreated as an act. What kind of emotional preparation did the real actors went through to get to these levels of emotional turmoil? Could it be possible that what we see is reflective of what happened in real life behind the scenes? Black Bear is a riveting view on the other side of the screen.

While the three leads are impressive in their roles, both Aubrey Plaza and Christopher Abbott are revelatory with meatier roles. Abbott is a bully that constantly changes the narrative. His intentions do not just gaslight the women of the story, but the audience as well. His shifts between victim and perpetrator are easily and disturbingly done. His voice and mannerisms constantly remind of a manipulative Jake Gyllenhaal.

Aubrey Plaza, as the main character and subject that drastically changes in both scenarios, is fragile, unpredictable, and limitless. Her character goes through an emotional rollercoaster, whether as a director looking for inspiration, a woman dealing with treason and heartache, or an actress tolerating and even embracing abusive attitudes towards her on set. She perfectly captures the chaotic essence of the movie, which starts and ends with her.

Beyond all its successes, the movie presents mysteries that go beyond its control. In this regard, it seems that Levine is not interested in creating answers or even the possibility of comprehension, he just wants to create confusion. Its ambition and self-assuredness do not justify its lack of answers regarding the first half of the movie. What is the point of making it so complicated if there is not a reason that justifies this complexity?

Nevertheless, Black Bear is an enveloping experience that shines because of the shameless commitment of its stars and the privileged view it provides on the abusive bond between artists. Just do not try to find an answer to everything you see on screen.