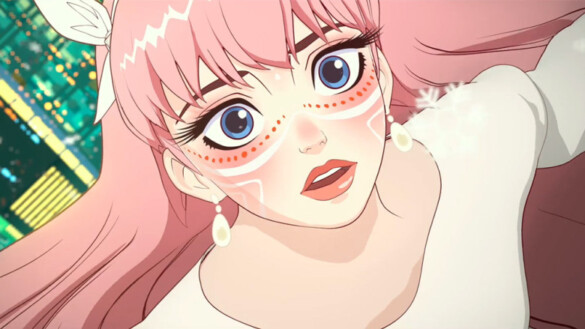 “Oh, great, another readaptation of Beauty and the Beast,” I sighed in exasperation when I saw the trailer for Mamoru Hosoda’s Belle for the first time. Well, after seeing the film, I’d like to slap this old version of me in the face. The trailers truly do not do this movie justice, and while Belle does explore some familiar territory with its quasi-retelling of a story that’s been done time and again in film, Hosoda’s interpretation of the tale elevates itself with stunning animation, a unique mesh of genres, and a surprisingly impactful third act ripe with human emotion. It immediately became the first must-see movie of the new year.

The film does not explicitly re-tell Beauty and the Beast, but rather takes the popular story as a backdrop for a sort-of virtual MetaVerse named “U”, where users can create online personas of themselves based on their looks and qualities and shatter their real-life loneliness. The most popular user of the virtual world is named “Bell”, who looks and sings like an angel. Everyone loves her, but her real-life persona is shrouded in mystery, which prompts media outlets to try and investigate who they could be. In reality, Bell is just an ordinary girl named Suzu Naito (Kaho Nakamura), a lonely highschool student who uses her persona to become the person she wants to be, and breakthrough her real life limiting beliefs that prevent her from being with virtually anyone.

Suzu suffered from major trauma in her childhood, which caused alienation from her classmates, afraid that if she becomes close friends with anyone, tragedy could befall them at any time and cause her more pain. Inside U, she can become the person she’s always wanted to be, and “Bell” becomes an instant sensation once she starts to sing freely. However, in the virtual world, a creature known as The Dragon (Takeru Satoh) is being chased by a group of “superheroes” called the Justices, whose goal is to preserve U’s peace by using a tool to ‘unveil’ anyone who dares to threaten the sanctity of U’s virtual space. Their leader, Justin (Toshiyuki Morikawa) vows to unveil The Dragon and remove him from U once his true identity is revealed. But a darker secret looms connected to The Dragon, and Bell/Suzu is determined to find out who the person really is before Justin ever has the chance to unveil anyone.

A superhero movie, a Beauty and the Beast re-tread, AND a heartfelt coming-of-age drama at the same time? Sounds quite complicated, and it likely wouldn’t have worked if there wasn’t a talented director on board. Hosoda knows when to dazzle audiences with staggering visuals of the virtual “U” space, where the vastness of it all makes the viewer want to plunge themselves in its massive size and scope alongside Bell, and when to pull their heartstrings through a slew of emotional crescendos that will surely make them bawl their eyes out.

Hosoda never shies away from presenting difficult subjects to the viewers, which American studios severely lack the guts to do. It’s part of the reason why I believe anime is a better form of animation than the classic studio-driven animated films, as it isn’t afraid to make anyone (of all ages) think about a plethora of subjects. Here, Hosoda touches upon loneliness, social anxiety, depression, trauma, and child abuse. It’s not an easy watch, with the filmmaker using most of the themes through the Beauty and the Beast storyline, with Justin and the Justices acting as the “Gaston” and “LeFou” of the story, while Suzu lives in a “little town”, afraid to take her place amongst her class and tell her elementary school crush, Shinobu (Ryo Narita) she loves him. Without spoiling, The Dragon holds most of his internal pain to protect those around him, which makes him a misunderstood “creature” that the Justices want to ostracize from U, even if this internal pain is what causes him to become Bell’s hero.

The fights between The Dragon and the Justices are a miraculous feat of animation, with the camera constantly moving around eye-widening flashes of light and the high-speed “heroes” trying to unveil the one person inside U they do not understand. These scenes are also a stark contrast between the minimalist and “realistic” animation of Suzu’s world versus the large-scale and staggering beauty of U, where virtually anything becomes possible. An ordinary person can become a superhero with the sole goal to maintain U’s peace, but maybe their own insecurities as an individual (they’re likely a lonely bully in real life, but Hosoda doesn’t pay too much attention to that) has caused them to fantasize about being a hero of a space they can have free reign over and forget their current states in the real world.

As Belle treads in predictable territory for the first hour or so, the movie doesn’t truly come to fruition until the film’s almost forty-minute long climax, which swells up to many emotional notes at once and becomes a much more impactful film than a simple Beauty and the Beast retelling. Sure, Hosoda doesn’t shy away from the fact that he’s borrowing from many visual cues from Disney’s own adaptation (including an almost shot-for-shot ballroom dance sequence), but these scenes are important to build the character relationship between Bell/Suzu and The Dragon, all the while deepening Suzu’s own understanding of who The Dragon can be and how this encounter affects her real life interactions.

Once this dynamic happens, Hosoda can now play around with the characters’ emotions and build up the climax, which contains many emotional cruxes at once. The incredible animation, alongside a soulful score from Taisei Iwasaki, Ludvig Forssell, Yuta Bandoh, and Miho Sakai amplify the emotion and transform a rather ordinary story that’s been done one too many times inside an overwhelming finale filled with many powerful moments that should not be revealed, for the viewer to be swept up in the film’s emotional power and potentially relate to Suzu’s quest to help The Dragon, while breaking through her own psychological dragon preventing her from living to the fullest.

I had an IMAX ticket bought for this movie in November. However, due to the Omicron variant forcing theatres to shut down in my area, I couldn’t witness the film on the biggest screen imaginable. If you can see this movie this way, and you feel safe going to the theater, go for it. Watching it on a TV screen (like I did) will not do Belle’s massive scope and stunning animation justice, and will bring the film’s numerous emotional arcs in a more overwhelming way than at home. Belle is a marvel to look at and appreciate, and going to the movies and seeing this on the largest IMAX screen you can find will amplify the experience. Lord knows what the 2022 movie season will look like, still poised with massive uncertainty amongst Omicron fears and the never-ending disruptions of the COVID-19 pandemic, but if Belle is an indicator of what’s to come during the year, especially when it’s being released in January, infamously known as the dumping ground of movies, then we’re off to an incredible start of a potentially incredible year of films and TV series.