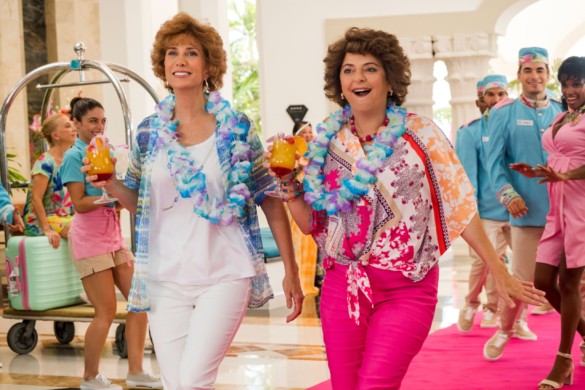 Synopsis: Lifelong friends Barb and Star embark on the adventure of a lifetime when they decide to leave their small Midwestern town for the first time ever.

In the bleakness of winter, we could all use a vacation to someplace warm and sunny. But, with a pandemic raging, that is most likely not something most of us can do.  What we can do, however, is watch a funny movie that takes place somewhere warm and sunny.  The movie Barb and Star go to Vista Del Mar should satisfy even the grumpiest of us.

Written by and starring the great Kristin Wig and Annie Mumulo, this movie is more than a breath of fresh air. It is a warm story of friendship, aging, and new beginnings. Barb and Star have clearly been best friends for forever. They just adore each other, and the chemistry between Wig and Mumulo rings very true. When they are introduced at the beginning of the film, they are mid-conversation, as if they have all the time in the world to sit and chat. The reveal that they are actually at work, and sitting on a display model at Jennifer’s Convertibles really gave me a laugh. We learn that they are so devoted to each other that not only do they come into work on their days off to spend more time together, they also live together. What I loved about these two is that they really did seem like two ladies from the midwest. The hairstyles, the nightgowns, the hair curlers… I lived in Indiana for 7 years, and this rang very true to me. But, it wasn’t exaggerated in a mean spirited way.  These ladies are hilarious and fun! They make everything an adventure! I want to know them, hang out with them, and discuss the imaginary and amazing “Trish,” a lady of their own creation who lives the life Barb and Star dream about. I’m not lying when I say that I watched the conversation about Trish at least 4 times before moving on to the rest of the film.

While I really enjoyed the relationship between Barb and Star, I wasn’t a fan of the subplot of the film, about an evil villain seeking revenge on Vista del Mar for a humiliating event that happened to her as a child. Wig plays the villain, named Sharon Gordon Fisherman, and while amusing, it seemed like a rehash of an Austin Powers villain, but at least in Austin Powers, it made sense. Jamie Dornan plays Edgar Padget, who is in love with Fisherman, and just wants her to declare that they are an “official” couple. How do Barb and Star get mixed up in the shenanigans of super-villains?  Well, they get extremely drunk and hook up with Edgar. I’m not familiar with a great deal of Dornan’s work outside of the 50 Shades of Gray series, but he was charming in a comedic and silly role. I will admit that seeing him break out into song and rip his shirt open was completely amazing. He ends up coming between the women as a love interest.  While Star rediscovers romance and love (her husband left her for another woman), Barb gets over her fears and swims in the ocean, explores, and goes on a variety of adventures. I would have loved the entire film to be about their friendship, the romance, and finding themselves, but the super-villain plot kept getting in the way.

Other elements that were enjoyable were the musical numbers, which were delightfully over-the-top, and the “Talking Club” scene, which featured other terrific comedic performances of Phylis Smith, Rose Abdoo, and Vanessa Bayer.  The strict rules that Bayer has for her fellow club members are over-the-top, yet I can see an alpha-female imposing these on her friends. The female interactions in this scene, while obviously funny, also rang true, from Smith’s character who just wanted to talk about her horse to Barb and Star, embarrassed that they have to admit the store where they worked has closed, and they are now without jobs.  I’m the same age as these women, and I have definitely known women like this. I honestly feel the movie could have revolved around Barb and Star, with Debbie as the antagonist. We all know a Debbie.

If you are looking for a deep, riveting look at society and the meaning of life, this film is not it. If you are tired of cold weather, being cooped up in the house, and need a good, hard laugh, this movie completely delivers.  There is something here for everyone: musical numbers, songs about boobs, but, more importantly, a very endearing story about friendship.