Movie Review (GFF): ‘In The Shadows’ is an Uneven Dystopian Mind Trip 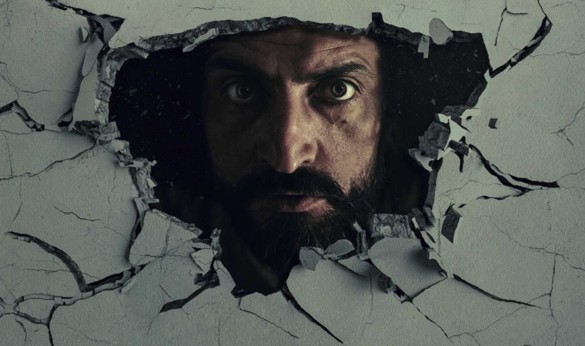 Synopsis: In a dystopia of undefined place and time, dominated by primitive technology, a group of people are controlled by an omnipresent surveillance system. When one of them breaks rank, it sets off a chain reaction that will change the course of everyone’s lives.

If Terry Gilliam were to make a low-budget movie in Turkey, the result would look an awful lot like In The Shadows. Erden Tepegöz’s dystopian sci-fi owes a lot to Gilliam’s works such as Brazil, 12 Monkeys, and Zero Thereom but carves its own mark with its deftly told yet underwritten narrative.

Zait (Numan Acar, former Homeland and Aladdin actor, who boasts the most impressive head of hair of anyone in the movie) works in a factory which at first looks like any factory you might have seen. Except…there are no bosses. No one in charge, seemingly. In fact, the only indication we have of authority comes from the ever watchful cameras in every room (including a mixed sex shower room, unnervingly), and a robotic voice which occasionally barks out “please return to your machines” if the workers get too lax.  To make matters worse the workers are subjected to a periodic health check every so often which consists of lying on a bed in an empty room and placing a strange device on their heads which informs them of the status of the health check. Disturbingly, if anyone fails to pass the health check they never leave the room and are never seen again.

Zait is a naturally taciturn presence, stooped over and practically dragging himself from scene to scene. He is clearly worn down by the experience until one day a machine stops working. Zait enlists the help of a mysterious repairman (who speaks in vague riddles about the nature of time) and begins to notice that not all the machines work as they’re supposed to. As he searches for answers, Zait finds himself diving into a strange labyrinth of lies and mysteries – some of which he may risk his life to uncover. As he battles a mysterious skin condition which threatens to unravel the whole factory, Zait must find a way to get to the truth before it’s too late.

In The Shadows benefits from an intriguing setup, and a compelling lead actor in Numan Acar, but doesn’t quite deliver on its promises. You feel this could be partly due to budget, which Tepegöz has worked wonders with, but it also could be to do with the ambition of In The Shadows. In every rusty shot, enhanced with a dirty steampunk style, there is the threat that In The Shadows is hiding some big secrets which it’s building towards unveiling. However, this doesn’t quite manifest. Zait’s challenges against the unseen forces of the factory always feel a little too muted to take seriously. Although an unseen enemy can be a scary prospect, we’re given very little reason to understand why the workers are so compliant.

There are suggestions of a dark reality behind the factory walls (for example at the moment when a worker fails a health check, and we hear shouting and scuffling through the wall to indicate he is being taken away), and Tepegöz does well in creating a tense, macabre feeling to In The Shadows which will keep you on edge, but these fail to materialize in a way which would explain why we’re in this situation. The workers are clearly terrified of their anonymous overlords, and yet when Zait begins testing his boundaries the biggest punishment is the withholding of food. The workers complain that Zait’s behavior will see them starve, yet Zait counters that they can leave the factory any time they want. Indeed there doesn’t appear to be anyone stopping them. So why are they there?

Perhaps these are not questions Tepegöz is necessarily interested in answering. His focus feels more Kafkaesque: here we have a shadowy company controlling the lives of its workers, who don’t appear to know – or care – what they’re doing in the factory in the first place. It is almost an existential malady of a movie: life is a struggle against things we don’t know. Ultimately, the biggest enemies we face may be ourselves.

That may be reading too much into things, but what In The Shadows does best is leave acres of space for interpretation. Between every shot, your mind can wander through this industrial wasteland and build the picture of what is really happening. Whether he intended it or not, Tepegöz has crafted a Rorschach in which what you get out of it depends on the viewer themselves, and that’s no bad thing.