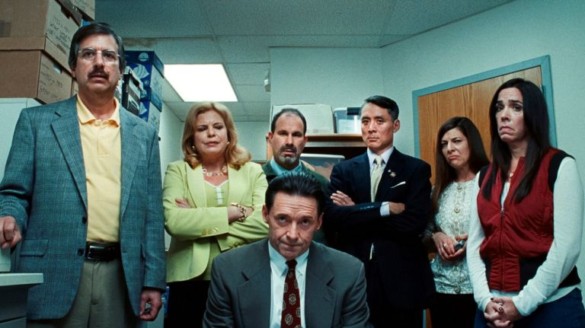 Synopsis: The beloved superintendent of New York’s Roslyn school district and his staff, friends and relatives become the prime suspects in the unfolding of the single largest public school embezzlement scandal in American history.

As much as we like to deny it, appearances matter. This is not just a simple indictment of how we operate romantically, but in just about every arena of life. We trust the people who are more stereotypically attractive, who spend time on their looks, and who exude a sense of confidence. Those who are able to do this are able to push boundaries without those pesky questions of right and wrong. And it takes a truly motivated and passionate person to see through this and find the truth. This is the story that director Cory Finley is putting forth, based on true events, in Bad Education.

No review of Bad Education should begin anywhere but with the performance of Hugh Jackman. Jackman’s career, while impressive on some levels, does feel like a bit of a missed opportunity, and this proves it. Make no mistake, Jackman is at his best when playing characters with an edge, those we want to trust and know we shouldn’t. Plus, he is equally adept at turning on the charm and, in private moments, letting us see the pain just beneath the surface. The film is bookended by sequences of Frank Tassone (Jackman) prepping himself physically, through primping his appearance and rehearsing what he is about to say; and in these moments, with the camera uncomfortably close, Jackman already creates depth. Given that this is a film about academic corruption, it would be easy to see him as a pure villain, but what sets this apart is making the choice to also show Tassone in uplifting moments, such as motivating a young student or his tender moments with Kyle (Rafael Casal). This balancing act allows us to see the normalcy of this man, instead of focusing on pure black comedy.

But Tassone is not the only one who is focused on appearances, and is certainly not alone when parsing out blame. There are some obvious culprits, especially Pam Gluckin (Allison Janney). In perhaps the least shocking news in years, Janney is fantastic and has perfected the Long Island attitude and accent. But her predilection for big houses, shiny jewelry, and most of all, being seen is indicative of the downfall of all of these characters. But probably less obvious, is the community at large. While we tend to ask few questions of the confident Tassones of the world, we ask even less of those who we are profiting by. Much is made of the Roslyn school district rise to the top under his leadership, which leads not only to community pride, but also rising property values. Finley frames the ignoring of Tassone’s tailored suits, numerous plane tickets, and many other extravagances as foolish at best and blameworthy at worst.

But again, this is not a simple story of corruption. The film makes it clear that, despite his poor choices, Tassone does truly still care about the students in his care. The most pointed example is that of Rachel Barghava (Geraldine Viswanathan), who comes to him from the school newspaper to do a “puff piece” on the to be constructed skywalk, which is quite costly. This is not to mention that there are more obvious repairs to be made that would help students immediately. This is, of course, one more example of the film’s premise that if you make it pretty, people will trust it and be happy. Tassone attempts to motivate her to not just do a simple story if she really wants to excel. This duality in Tassone leads us to care about him just enough, even when it might be his downfall. Viswanathan plays bored high school student and motivated investigative reporter well and does give the movie one person to truly root for,
without reservation.

There are a few complaints to be had, mainly that the script willfully hides information from the audience. Now, this is a story about people who purposefully obfuscated the facts. However, it betrays the strength of the film to hide them in this case. That strength is having the bravery to make a reviled figure our protagonist. If the goal is to show me this man, show him, all of him. Because of this, certain characters are introduced at odd times and become much more shallow than they should appear. Additionally, there is some magical realism sprinkled in that feels like a desperate attempt to feel some level of closure, and it may have served the film better to end on a more down note.

Those complaints aside, Bad Education is a strong film overall, especially during a time in which we are bereft of theatrical releases and original ideas. Finley’s ability to impart interesting ideas, without preaching, along with his willingness to turn the camera on us makes for a powerful experience.