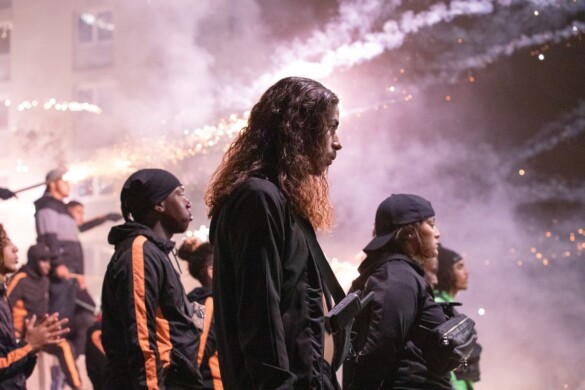 Synopsis: Hours after the tragic death of their youngest brother in unexplained circumstances, three siblings have their lives thrown into chaos.

The opening ten minutes of Romain Gavras’ Athena is a staggering, kinetic tour-de-force. A single, unbroken shot – which will have you pausing the action at random intervals trying to find the invisible joins – begins with an assault at a police station, which then spills out onto the Parisian streets, before evolving into a highway chase, and then finally into the eponymous Parisian projects called Athena where its inhabitants band together for one last stand. All of it is handled with stunning technical acumen and confidence. It is a breathtaking achievement and a sign of the visual rapture which awaits.

If the name Romain Gavras sounds familiar to you, it may be his father you’re thinking of. The Greco-French director Costas-Gavras is a Palme d’Or and Academy Award winner known for his political thrillers such as Z and Missing (the former of which received an Academy Award for Best Foreign Film, the latter the Academy Award for Best Adapted Screenplay). While the apple doesn’t fall from the tree in terms of subject matter, the delivery itself couldn’t be more different.

Gavras the younger has made his career from commercials and music videos, and it shows. His style is flashy and bombastic, bearing little of the subtlety his father employs. For Athena, his third feature, he has shown no interest in changing that methodology. While his narrative lacks any nuance, it can’t be denied that his cinematography skills are alive and well: aside from that opening tracking shot are genuinely jaw-dropping visuals such as a roof of riot shields protecting police from firebombs; a violent crowd silhouetted against the night sky; smoke-filled partitions backdropped to dozens of fleeing citizens – all soundtracked to a haunting Grecian chorus. It is a virtuoso effort, pure visual poetry. Whatever else Athena lacks, it certainly does not lack style.

Athena follows in the illustrious footsteps of the likes of La Haine, Danish movie Shorta, and Les Miserables (the director of which, Ladj Ly, is credited as a writer for Athena) in examining the subject of police brutality through the lens of urban violence amid destitute estates. Its script is not as tight or in-depth as either Shorta or Les Mis, however, and if you’ve come for the political commentary, you might well be disappointed.

After the death of 13 year old Idir at the hands of a brutal police force, his three brothers Abdel (Dali Benssalah), Karim (Sami Slimane), and Moktar (Ouassini Embarek) all react in different ways. Adbel, the middle brother, is stoic and proud. A soldier in the French army, he believes justice will come through legal means and encourages his siblings to have faith in the system. Moktar, the eldest, is a selfcentered drug dealer worried that the death of his youngest brother will invite police scrutiny into his business and so becomes obsessed with covering his tracks before he’s caught. Karim, the youngest, is a messianic revolutionary. Not content with Abdel’s patience, he galvanizes the downtrodden of Paris to come together in revenge against the justice system which overlooks ethnic minorities and the poverty stricken – “it’s about proving to them that we’re not the victims” he orates to a room full of angry young men and women, ready to take up arms for him, “every time they kill, we kill”.

Karim and his cohort assault a police station, steal a cache of weapons, and lead a police chase back to Athena, where they intend to hold police officers hostage until the ones who killed Idir are identified and arrested. This triggers Moktar into fleeing with the drugs and weapons he carries, but finds that Karim has barricaded them in. With no way out, Moktar decides to bury his drugs before the police eventually break through. Abdel is horrified at Karim’s actions and steals into Athena in order to talk sense into his brother before it’s too late. Meanwhile, Jerome (Anthony Bajon) is a riot cop about to break into Athena and bring its citizens to justice. The fates of all four men will converge in ways that will change them all forever.

Athena is laid out in quarters; the four men at the center of the story each get their own narratives and Gavras’ idea is to employ tracking shots for each man as they run across the sprawling estate of Athena. The blocking in these scenes is mind-boggling: both Adbel and Karim find themselves as leaders and, as such, their scenes involve them striding from set-piece to set-piece, helping out their comrades and neighbours in a wide array of situations. The camerawork for these moments is gritty and flawless; you really feel you’re there in the moment as Abdel flies down a busy stairwell, camera trailing behind, as he’s forced into helping carry an obese lady halfway down so that he can pass and assist other neighbors in fleeing before the police break through. Meanwhile Karim is a commander passing out orders to his soldiers, moving from room to room with authority, battling relentless requests for his attention. Elsewhere, Moktar begins to have a meltdown as he orders his own underlings to search for his hidden drugs so that they can be stored somewhere safer. Everything is frantic and harried, and Gavras pits his camera in the midst of all of it.

Where Athena begins to falter is in its purpose. Choosing a hot button topic such as police brutality and racism (something which is endemic in France) means treating the subject matter with the nuance and delicacy that such a topic demands. However, Gavras never really gives us any insights into the wider political arena which has caused this moment. There are no smaller interactions which shed light on the brothers’ lives, or what might have driven them to this. Why has Adbel become so loyal and obedient to the French state? Why has Karim’s fury (understandable as it is) led him to such devastating choices? Why does Moktar care nothing for his siblings and only for his investments? In creating one big chaotic moment, Gavras has had to sacrifice any character development and it undermines his message.

Athena is a dark, gritty, utterly breathtaking piece of filmmaking. It is gorgeously expansive and daring, and its cinematography a thing of wonder. A shame that it has debuted on Netflix, when something like this deserves to be seen on the biggest screen possible. While it may not have much in the way of narrative heft, and its characters are mostly two dimensional (especially the caricaturish Moktar), the visual style and relentless pacing may be enough to carry you through, if that’s your kind of thing.