Movie Review: As It Is In Heaven 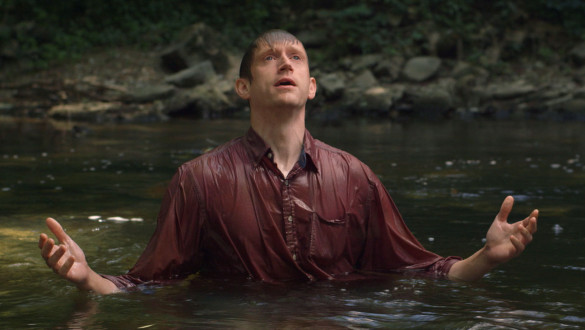 Synopsis: After the death of the Prophet, a man is called to lead his small religious sect as they anxiously await the end of the world they were promised.

DIRECTION
For a director that is working on a very small budget, Josh Overbay’s As It Is In Heaven is arguably the best “faith” based film of 2014 so far. Overbay does a wonderful job of utilizing his Kentucky backwoods aesthetic, which made for a rich visual style and sound design. The cinematography is gorgeous, fluid and used wonderfully to help elevate the narrative and the compelling character struggles in the film. The religious aspects of the film are never over-the-top or campy, which is the case in a lot films featuring Christian customs. Overbay’s pacing is pretty solid and the third act is brilliantly handled. The last few shots of the film were absolutely perfect.

SCRIPT
The story is centered around David (Chris Nelson), who is recruited by Edward (John Lina) to join a small religious sect in which he leads. Edward is considered a modern-day Prophet and believes that Jesus will be coming back to Earth in about 30 days. Soon after David is recruited, Edward becomes ill and soon passes away, but before he does, he tells David that he wants him to lead the group. Edward’s son, Eamon, isn’t a fan of David and animosity is raised among them, especially after David orders a fast until the day of reckoning. David’s choices start to lead to some ugly consequences but most members of the group still try to be faithful till the end, despite it’s harrowing nature. While these kinds of cults are stereotyped in public, the film explores their perspectives and genuine beliefs, despite the connotations that come with it. The story also explores ideas of leadership and how faith can affect people’s decisions, especially when trying to interpret dreams and visions from a “supreme being”. The internal struggle David has is fascinating and the crystallization of that idea is impeccable. The narrative slows down a little bit towards the beginning of the third act, but if you keep with and stay engaged, the final punch is a knockout.

PERFORMANCES
None of the actors are going to win Academy Awards, but they are more than serviceable for the kind of film we see here. Chris Nelson is fantastic, but what makes his great here isn’t his dialogue, but rather his non-verbal expressions and mannerisms that sell the performance. The inner struggle he faces is strong and compelling, which he delivers well and the ending, again, is brilliant. The rest of the supporting cast, including Sylvia Boykin and Luke Beavers among others, is fine but none of them stand out as much.

SCORE
Composer’s Tim Morton and Ben Zoeller got the nod to score here and were terrific. The music uses southern tones and strings to capture the single location feel the film was going for. It really enhances the character moments, which lingers beautifully with the music. The main themes are used appropriately and definitely add to the experience.

FINAL THOUGHTS
As It Is In Heaven is a fascinating look at a group of people who genuinely believe in something that can seem ludicrous to the outside world, but to them it was very real. The drama is blended well and feels authentic throughout, especially when the repercussions of David’s choices start to follow. You don’t have to be religious to be engaged with this story and the ending is quite provocative.

A few month’s ago, we were privileged to interview director Josh Overbay about his film on one of our InSession Film Podcast: Extra Film episodes. Click here to listen to that show now!