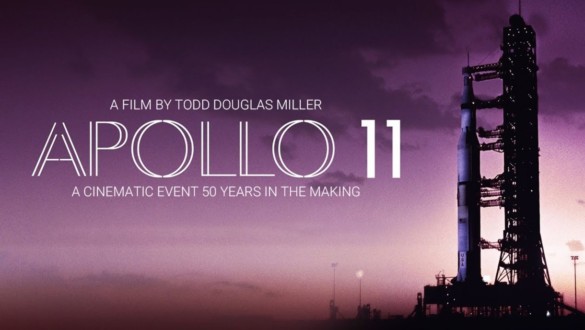 Synopsis: A look at the Apollo 11 mission to land on the moon led by commander Neil Armstrong and pilots Buzz Aldrin and Michael Collins.

I remember in the summer of last year, my father encouraged me to see Three Identical Strangers. I ended up seeing it with him, and being unmoved by the filmmaking on hand. From the boring interviews, to the real life tragedy played as a twist, Three Identical Strangers felt like a relic of older, poorer documentaries, especially in the year of docs like Minding the Gap and Hale County This Morning, This Evening. Luckily, the first big documentary of 2019 firmly bids au revoir to the boring, outdated talking head documentary form. Apollo 11 is a desperately needed shot in the arm of documentary filmmaking.

The original selling point of Apollo 11 was the new, unseen footage. It was the focus of the ads and promo, attempting to sell itself to tech fetishists, and NASA nerds, moments into the film, it presents itself as a new, necessary work to any documentary fans. It’s not like this style is necessarily new, but it’s so refreshingly used here that it feels unique. It’s not like this subject isn’t an underdone topic in film either – from First Man to For All Mankind, documentary and narrative film about the Apollo 11 mission isn’t scarce, but if you have any interest in the subject, or the documentary as an art form, this film is a must see.

The most striking thing about Apollo 11 is the grainy, 70mm footage. This footage, which was never released to the public until now, follows Cold War in being one of the most stunning things I’ve ever seen in theaters. There’s a surprising crispness to every shot here, which does wonders to adding to the audience’s perspective. Something is so unique and beautiful about the crowds of people watching the launch, and how wonderfully it’s captured. Those shots almost made me a patriot, which is a hard accomplishment.

Almost all of the credit can be given to director and editor Todd Douglas Miller, who’s vision of this narrative is refreshing and wonderful. The decision to place the audience right into the events unfolding on screen, with no narration or interviews feels like a deliberately brilliant choice. The editing of this superb footage, when combining it with the perfect audio, feels like the work of a new master. Someone to behold alongside our Errol Morris’, and Frederick Wiseman’s. The only real criticism is that the style here, while being fabulous, really carries the material. This is all information that’s central to culture, and there’s no new thesis here. Not that that is a bad thing, but the stylization does make the film, and towards the end the facts presented can feel like they aren’t anything new.

Even with that minor flaw, Apollo 11 is something astonishing to see in cinema. Every shot brims with beauty in the capturing of a decade, and the editing is what makes the film. While this may not be a new story, this incredible approach to the story makes it worth telling again, even if you know it already.